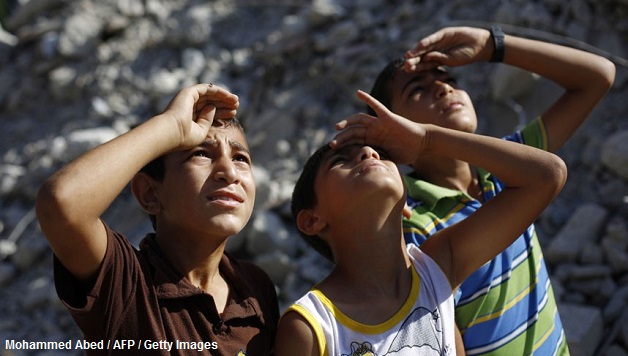 In a period of 50 days, the nearly two million residents of the devastated Gaza Strip were bombarded day and night from the air, sea and land, by an estimated 20,000 tons of explosives – the equivalent of the atomic bomb dropped on Nagasaki in 1945. It was the worst bloodshed in the history of the Strip. Around 2,200 residents perished, including about 500 babies and children; 100,000 residents saw their homes turned into rubble.

Forty-three percent of Gazans would like to be able to flee this giant ghetto (PCPSR poll, 2 September). Some refugees managed to escape through Egypt, hoping to board a boat to find a new life in Europe. One such a boat overturned near the shores of Alexandria, and 15 drowned.

Israeli prime minister, Benjamin Netanyahu, claims that Hamas took an unprecedented blow. A dubious claim was even shoved onto the press – in an attempt to construct a victory narrative – of the Israeli state’s prevention of a Hamas conspiracy to topple the Palestinian Authority (PA) in the West Bank. In the pursuit of such an image, the last few days of the war saw an escalation of air-bombing, toppling multi-story buildings, and assassinating a series of Hamas militia officials.

However, even on the last day of the war, the strongest military power in the Middle East did not manage to prevent Hamas from firing rockets to Gush Dan in the Tel Aviv metropolitan area, where almost half of the population in Israel resides. This mainly one-sided war between an occupying and besieging regime and an occupied and besieged population, resulted also in the death of six civilians in Israel, among them a small child.

Though the Iron Dome interception system meant that the number of Israeli civilian casualties remained extremely low, there has never before been such an intense, geographically wide and population-wide firing of rockets into Israel, including a few launched by Palestinian militias from Lebanon and Syria. International flights were significantly disrupted. Sixty-seven Israeli soldiers died, mostly during the phase of the ground invasion, and the bodies of two soldiers have not yet been retrieved.

Throughout the war, the Israeli government and the Israel Defence Force (IDF) command were taken by surprise by some of the military moves of Hamas, and manifested a lack of basic understanding of the dynamic of the events. At first, they assessed that Hamas, after being pushed to agree to a formal coalition with Fatah due to its aggravated economic problems under a tightened Israeli-Egyptian siege, would not dare to respond significantly to the attacks on itself and the Palestinians. At the height of the war, in early August, the Israeli chief of staff made a speech calling on the residents of southern Israel who had fled to go back to their homes.

The government hoped that devastating destruction and death in the Strip would send a message to any potential military challenge to the Israeli regime regionally. But, coming after Israel absorbed a political defeat at the hands of Hezbollah in the 2006 second Israel-Lebanon war, in this Gaza war the Israeli state could not subdue a weaker militia than Hezbollah, over a longer duration.

Since 2001, Israel has assassinated over 200 military and political leaders and officials in the Gaza Strip. Thousands have been slaughtered in the series of military offensives launched under the pretext of stopping rocket fire. In reality, the main aim is to punish collectively the Palestinians and subdue them to accept Israeli control of the Strip and the West Bank in one form or another. But the July-August 2014 Gaza war exposed again the limits of Israel’s military power, precisely because the resistance to the siege and occupation is not particular to one organisation or another but reflects the will of an entire Palestinian population.

Isolation policies imposed on the Gaza Strip since the early 1990s reached their peak in the most cruel siege policies after Hamas won the PA elections in 2006, and then in 2007 remained in authority in the Strip. At first, Hamas retained public support based on its opposition to the siege, but its use of political repression and religious coercion, along with the inevitable failure of its strategy and primary tactics to show a way out of the siege and national oppression, led to an increase in critical voices among the Gazan population. This accelerated when the removal of Muslim Brotherhood rule in Egypt led to a re-intensification of the siege and a further isolation of Hamas.

The July-August war, however, revived Hamas’s popularity, to the highest level for eight years, although more restrained in the Gaza Strip than in the West Bank. Hamas is now expected to win again in PA elections if they take place as planned within a few months. Hamas’s leader in Gaza, Ismail Haniyeh, is currently the most popular candidate for the presidency of the PA, for the first time receiving more support than the imprisoned popular Fatah leader, Marwan Barghouti.

The period of the war in Gaza and the preceding three-week military raid in the West Bank saw a drop in support for Fatah and its PA president, Mahmoud Abbas. Its passivity faced with the Israeli regime’s barbarism, and the complete failure to change anything on the ground through its diplomatic strategy and appeals to western imperialism, have worn out the patience of significant layers. The PA, with its armed security forces, has served mostly to keep the status quo order under the occupation, employing rhetorical protest only.

This is contrary to the struggle most Palestinians would like to see, with around 60% supporting both the idea of mass popular demonstrations in the West Bank, as a lever to bring about the end of the Israeli occupation, and the idea of a return to an ‘armed intifada’ (PCPSR poll). Before the war, 41% supported the idea of an armed intifada. At present, 72% would like to see the Hamas military approach being duplicated in the West Bank. Even more support the firing of rockets from Gaza as long as the siege continues. This also underlines that rocket fire from the West Bank towards Israeli settlements and Israel, some isolated attempts having been made in previous years, could become a new reality if the Israeli regime continues its route unabated.

Though Hamas enjoys higher support now, the continuation of the siege and occupation will inevitably lead, at a later stage, to a reassessment and increase in criticism of its dead-end strategy, and pro-capitalist and right-wing Islamist political programme. The intra-Palestinian debate on the strategy needed for the struggle for national liberation will reawaken. This can open a way for the growth of new left and socialist forces that could begin to offer a way out, on the basis of, among other things, a return to the road of mass struggle in the spirit of the first intifada.

Currently, there is complete distrust towards any proposed ‘solution’ for the national conflict in today’s circumstances: 62% of Palestinians in the West Bank and Gaza hold the view that a two-state solution is not viable because of the colonial settlements, while 75% oppose a one-state solution.

The post-ceasefire period is volatile. In 2012, the regional situation compelled the previous Netanyahu government to restrain fire within a week and to formally commit to easing some elements of the siege. This time, however, Hamas has not been able to point to any clear, concrete, formal concessions won against the siege. Even with more developed military power, it has so far only got the same formal concessions that it had in 2012. If Israel does not offer any significant concessions in its siege policies, it is probable that rocket fire from the Strip will be renewed, possibly in the coming few months. The larger militias – Hamas and Islamic Jihad – are likely not to want to return to a wide military confrontation without a period of re-preparation, but the rocket fire could be renewed on a small scale – one ‘anonymous’ mortar shell has been detected three weeks after the ceasefire.

So far, all that has been agreed as a basis for the ceasefire, reached under the sponsorship of the Sisi regime in Egypt, are the qualified easing of border crossings and relieving the maritime siege by a commitment to double the Palestinian fishing area to six nautical miles. This was promised in the 2012 ceasefire understandings and violated. The Oslo accords (1993-95) had promised 20 nautical miles.

The indirect negotiations between Israel and Hamas are supposed to be renewed in Cairo with the aim of discussing further concessions and thus reaching a more stable ceasefire arrangement. But Netanyahu has hinted that it is not certain that an Israeli delegation will even attend. This is because any formal Israeli concessions in such a negotiation would be considered as another gain for Hamas. At the same time, there have been recent reports of incidents where the Israeli navy shot at Palestinian fishermen off the shores of the Gaza Strip, confiscated a boat and arrested two fishermen. Additionally, IDF troops made an incursion in the Strip in the area of Rafah.

This is all part of attempts by the Israeli regime to consolidate an image of its military supremacy to force the Palestinians to accept the status quo. Less than a week after the declared ceasefire, Netanyahu’s government announced an expropriation of 3.8 square kilometres – the largest in three decades – of Palestinian land in the occupied West Bank for the benefit of the Gush Etzion settlements. A few days later, the government published tenders for the construction of almost 300 new settlement housing-units at another location.

However, an extended political crisis is unfolding in Israel. The conflict with Hamas sparked an unprecedented crisis in the government at a time of war. Sharp controversies developed publically, involving all five political parties in the government, including parts of the leading Likud party, attacking the line of their own government.

Public support rates for Netanyahu dropped sharply from 82% at the beginning of the war to around 40% at its end. If there were any other party or politician that could appear as an alternative to Netanyahu, to solve the problems of the national conflict, and also of the widespread economic hardship, that drop would have been even more drastic. Netanyahu’s coalition now faces pressures that could lead to its collapse, and to new elections next year – either because of its failing strategy regarding the national conflict or due to major divisions over its planned cuts budget.

Days after the end of the war, postal workers were protesting and striking against redundancies, and the Histadrut trade union federation was leading small solidarity strikes in different parts of the public sector and threatening a general strike.

The feeling of a lack of economic security, and anger at poverty wages and high costs of living, deepen a schism between the Israeli working class and the ruling elite. These factors led to the mass social protest movement in 2011 and the unprecedented unionisation wave in recent years. This, potentially, opens more space to question the real interests and motives behind the occupation, settlements, siege, national oppression and expropriation of the Palestinians.