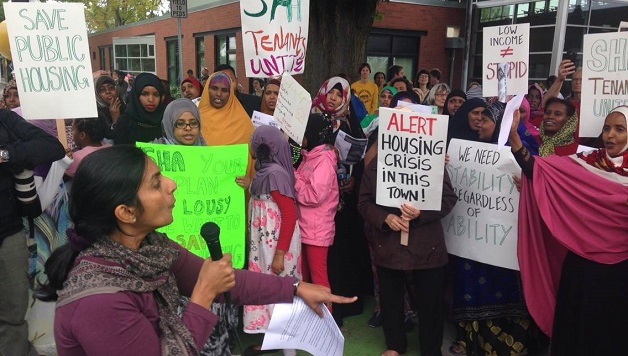 Below we post a letter from Socialist Alternative Seattle Councilmember Kshama Sawant about the recent movement in Seattle against attacks on low-income housing. The Seattle Housing Authority (SHA) has proposed a plan to massively increase the cost of rent for long-term tenants. This has led to hundreds attending protest meetings led by Kshama Sawant, and angry protests at SHA meetings. Below Kshama explains the reality of these attacks and calls for a public debate with the SHA Executive Director Andrew Lofton on the issues. For a copy of the letter, click here.

Over the last month, you have been trying to garner public support for “Stepping Forward,” a program that will increase the rents of the SHA’s low-income tenants by over 400% in a span of five years.

You are aware from the hearings that the tenants have overwhelmingly and categorically rejected Stepping Forward. Mayor Murray, Seattle City Councilmembers Nick Licata, Bruce Harrell and Tim Burgess, and several housing justice organizations such as the Tenants Union of Washington State, Puget Sound Sage, the Seattle Human Services Coalition, and the Low Income Housing Institute have all expressed clear opposition. I also met with you in my office on September 9th, when you described the program, and where I explained my unambiguous opposition to Stepping Forward. Opponents of Stepping Forward have cited the disproportionate harm it would cause to low-income families, immigrants and refugees, people of color, and single parent households. We have also questioned the reckless assumption that workforce training would allow low-income tenants to find the full-time jobs paying $16-19 per hour they would need to be able to pay rent under Stepping Forward. Far from providing a solution to Seattle’s affordable housing crisis, this proposal would exacerbate it, forcing thousands into homelessness or out of the city. The Tenants Union of Washington State and Puget Sound Sage have accurately said that Stepping Forward will do nothing other than create “a revolving door of poverty.”

By the fourth public hearing at New Holly Gathering Hall on September 23rd, it was abundantly clear to tenants that you had turned a deaf ear to their opposition. In response, the tenants waved signs and chanted “No Rent Hikes” and “Stepping Backward”. They effectively took control of the meeting so you could hear their explicit demand that you withdraw Stepping Forward immediately. At the last hearing at High Point on September 29th, nearly every low-income tenant who attended walked out of the hearing and held a community meeting to organize the movement to demand that the SHA retract Stepping Forward.

Mr. Lofton, I understand that you and the SHA’s Board of Commissioners are not elected by SHA tenants or by the people of Seattle. Nonetheless, it is your duty to serve the interests of SHA tenants. Seeing their adamant opposition to Stepping Forward should have been more than enough to stop Stepping Forward. My question is: what will it take for you and the SHA Board of the Commissioners to respect the wishes of the tenants, affordable housing advocates, and the people of Seattle and withdraw Stepping Forward?

If, as you claim, Stepping Forward will be good for low-income families, you should not hesitate to defend it in a public setting where there can be genuine debate and alternatives raised, rather than a one-sided presentation. In this spirit, I invite you and your team of collaborators to a public debate with me and the low-income tenants and housing justice activists I have been working with to oppose Stepping Forward.

The debate will also be useful to have an honest discussion on how to overcome federal cuts to SHA’s budget, how to provide affordable housing to the tens of thousands of people who are on SHA’s waiting lists, and about solutions to Seattle’s grave crisis of affordable housing.

I look forward to your reply.