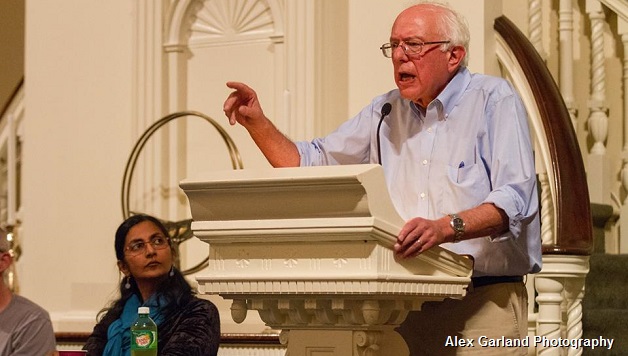 On the eve of the historic climate march in NYC last weekend, over a thousand people packed into a church while hundreds more were turned away. They came to hear Bernie Sanders, Kshama Sawant, Naomi Klein, Chris Hedges and Bill McKibben. Thousands more have since watched this electrifying event on TV, YouTube and various news websites.

The biggest mid-speech applause came for Kshama Sawant when she called on Bernie Sanders to run as an independent for President in 2016. Sanders answered by saying that he’s open but doesn’t want to run a purely “educational” campaign and just get “2% of the vote”. Socialist Alternative feels that the possibilities are there to do something much more substantial. A clear first step can be made now towards a mass working-class party in this country.

The climate march on Sunday with 400,000 people on the streets of New York along with demonstrations around the country and the world marked a new stage in the political radicalization of big sections of American society, particularly a big section of young people. Despite the lack of a clear program or way forward for the movement being articulated by its organizers, there was an enormous thirst for answers and evidence of a widespread anti-corporate and even anti-capitalist consciousness. This was reflected, for example, in the thousands of homemade signs against corporate domination. In recent months, we’ve seen determined mass  revolts against racist police violence in Ferguson, as well as protests against the attacks on women’s rights and against Israeli state terror and US foreign policy. Meanwhile, fast food strikes get bigger and bigger after the victory of 15 Now in Seattle. These are the initial rumblings of a new revolt that could find a massive political expression if the initiative is seized by the left.

Socialist Alternative and Kshama Sawant’s call for bold anti-capitalist politics, a movement with clear demands, mass direct action and independent electoral campaigns found a huge echo during the forum with Sanders and at the climate march itself. Sanders was subsequently put on the spot during an interview on Democracy Now with Amy Goodman about the possibility of running for President as an independent. Sanders again said he is thinking about his options.

To really see the potential for an independent left campaign that can take on the two parties of corporate power, Bernie Sanders should, as Socialist Alternative has previously raised, convene a conference of all those interested in his campaign and left politics. This could bring together union activists, forces from social movements, Greens, socialists and current candidates challenging the 1% and the political establishment. Such a conference would get a massive echo if prepared in connection to struggles of working people.

Karen Lewis, the leader of the Chicago Teachers’ Union, is now seriously considering a run against “Mayor 1%” Democrat Rahm Emmanuel. Polls show that Lewis could win. This again shows the possibilities of campaigns against corporate Democrats like Hillary Clinton. It is not enough just to run electoral campaigns though. To deliver gains for working people, as was done with 15 Now in Seattle, a grassroots movement has to be built independently from  the establishment in all working-class neighborhoods. Towards this end, Karen Lewis should run to win as an independent, refusing to take corporate donations and connect her campaign to a slate of working-class candidates for Chicago’s City Council.

More left candidates than in recent memory are running and gaining momentum, from Socialist Alternative’s Jess Spear in Washington State to Green Party member and union activist Howie Hawkins in New York. If prominent figures like Bernie Sanders and Karen Lewis stepped forward to organize a conference, then it would give further momentum to left political action and deepen the debate about the role of the Democrats.

Bernie Sanders appears genuinely unsure if campaigning as an independent will energize a campaign or if it will leave him marginalized. One thing is for sure: he has absolutely zero chance of winning a Democratic primary against the literally hundreds of millions of dollars that Hillary Clinton will spend. Left candidates running in the Presidential primaries only serve to bring workers, youth and people of color who are upset with mainstream Democrats into the fold of politics acceptable to the 1%. The candidate with the most money, almost without exception, always wins the Democratic primary. Bernie should steer clear of this trap, and Karen Lewis should run more clearly as an independent as well.

The best way to test the mood about political independence is to have an organized discussion with activists from across the country with roots in the struggles of working people. A conference called by Bernie Sanders in early 2015, planned beginning now, could bring these forces together and debate what type of platform can mobilize people into action. Within this discussion, Socialist Alternative would argue for political independence from the Democrats, a critique of capitalism and a program to provide a real alternative to this decaying system.

For a platform, Socialist Alternative would propose a $15 an hour minimum wage, taxes on the corporations and super-rich to fund a green jobs program and public ownership of the energy industry and big banks. In addition, we would call for opposition to U.S. imperialist wars and for an end to Israeli state terror against the Palestinians. We know that we disagree with Bernie Sanders on this issue as Kshama pointed out at the Saturday night forum. This point should continue to be debated within social justice movements and independent campaigns of working-class candidates. But as we have said before the most important and urgent debate is about how to build a real political force to represent the 99% and whether, as we think, this necessitates independence from both corporate-dominated parties.

The Time is Now!

After the massive People’s Climate March, there is tremendous energy to challenge the policies of capitalism. Recent polls have shown record highs of people that want a new political party. An independent Presidential campaign, organized in connection with the rumblings of revolt against the 1%, could shift the political landscape in this country dramatically. A convention early next year, convened by Bernie Sanders, could be a monumental step towards a new party of working-class people that can fight against environmental destruction, poverty, racism, sexism and corporate domination of politics.