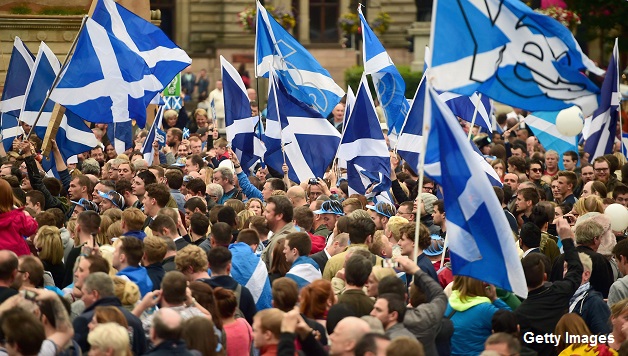 If the “strategists” of British capitalism believed that the narrow No vote in the independence referendum would allow politics to return to “normal”, this illusion has been shattered by the events of the last 48 hours.

A mass working class revolt against austerity on Thursday – the 45% – narrowly failed to secure a majority vote for Yes. Tens of thousands of working class people, radicalized and angry, are now looking to hit back at the political elite and are seeking out a political vehicle to achieve this.

Blocked on the issue of the referendum by a narrow No majority on Thursday, huge numbers are now joining political parties that campaigned for a Yes vote. The Scottish National Party are reporting 8,000 new members in the last two days, the Scottish Greens have had over 2,000 applications to join. Socialist Party Scotland, Solidarity and other socialist organisations have been inundated with interest and requests for membership.

As we wrote on Friday following the result, “It’s urgent that moves to build a new mass party are taken now to provide a new political home for the working class. If there is a delay in this development there is a danger that the opportunity can be lost and the pro-capitalist SNP can gain instead.”

Socialist Party Scotland believes that a new working class party in Scotland should be launched without delay with the aim of building this into a mass party in a short time.

If this call is made in a clear way – including by Tommy Sheridan, leading trade unionists, Socialist Party Scotland, Solidarity and other socialist organisations in Scotland – it would attract thousands of new working class people and young people to its banner within days. Including among the many who participated in politics for the first time during the referendum through groups like the Radical Independence Campaign and other Yes campaigns.

A new mass working class party would give a political voice to the hundreds of thousands who voted Yes in opposition to austerity and stood up to the blackmail of the capitalist establishment.

There is enormous and justified anger towards the Labour Party who acted as the main prop for Project Fear in Scotland. The best way to channel that anger and hit back at the Labour leaders is to ensure a new party for young people, trade unionists, socialists and the wider working class is built. A party that can both stand in elections and to help lead mass campaigns against cuts in communities and workplaces.

The numbers joining the SNP, a party that has passed on the Tory cuts in Scotland, is a warning of the dangers of delaying launching a new working class party. The SNP are benefiting from having being seen as standing up against the onslaught of Project Fear. But, in practice, their pro big business policies and the fact that they are carrying through cuts means they do not offer any way forward in fighting for the interests of working class people in Scotland.

Indeed the Scottish government plan to implement at least £2 billion in Westminster cuts in the next two years. This act alone will repel many workers and young people who are initially attracted to the SNP.

If a new working class party is launched it could transform the situation and allow a real socialist alternative to austerity to be built into a mass force. A party that would actually oppose cuts in practice, rather than words alone; that would stand for public ownership; for a real living wage of £10 an hour; for an independent socialist Scotland and whose public representatives would stand on a workers wage.

As was seen by the example of the Hope Over Fear tour, which Socialist Party Scotland played a leading role in, Tommy Sheridan gained a mass audience for a left and socialist case for independence. A new party could become a massive pole of attraction for all those who are seeking a political home to fight austerity with radical socialist policies.

Any significant delay in launching a new party could weaken its impact. It could bolster parties like the SNP and the also the Greens who, when in power, are carrying out austerity policies.

This unique political opportunity must be seized. If it is, thousands of working class people who voted Yes in the referendum would be given a chance to carry on that struggle in a mass movement to oppose cuts and austerity and for a socialist Scotland.