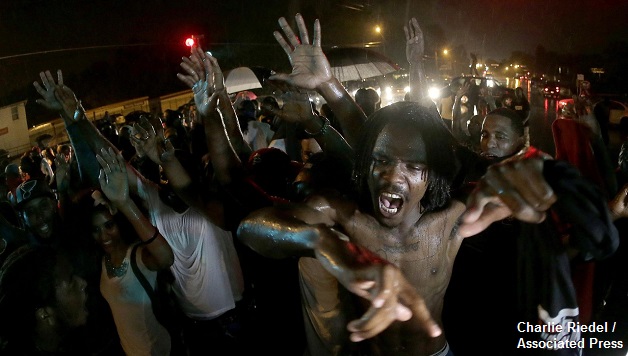 The corner of Ferguson Ave and West Florissant is the Tahir Square for an entire generation of young, radicalized black and brown people who are prepared to risk everything for the possibility of a better future. The spark for this rebellion was the vicious murder of Mike Brown, but the fact that the movement still has momentum is because everyone, inside and outside Ferguson, sees that this stretches beyond Mike Brown. Young people are at the heart of this movement. They feel mortal danger — that if nothing comes out of this, they might be the next Mike Brown. They’re critical of Obama and the Democratic Party. They’re skeptical of the traditional leaders of the community who consistently appeal for people to wait for the “justice” system to “work itself out”. They’re keenly aware that there’s a lack of quality jobs, schools, and housing. What is unique is their confidence in their ability to transform society and seek justice for Mike Brown through collective, militant action. They’ve earned this by standing up every night for almost two weeks against impossible odds, raw violent repression by the state, and some community “leaders” who consistently undermine the victories already won here by telling people to go home after they’ve come so far.

In the daytime, it would be difficult to see the magnitude of what has happened here. There are small clusters of people sitting in lawn chairs on the sidewalk holding “Justice for Mike Brown” and “hands up, don’t shoot” signs. Newspeople and filmmakers freely wander the streets interviewing anyone willing to talk to them. Traffic flows up Florissant Avenue freely. There are only a few cops stationed in the area. As the sun sets, people get off work, grab dinner, and start congregating on the sidewalk. A group of twenty or thirty start a march with energetic chants. More people come down. The cops start blocking streets and redirecting traffic. By the time the sun sets, hundreds are out walking on the sidewalks, sporadic marches form and dissipate, but the crowd keeps growing.

The crowd is local, people who wander down from nearby apartments and neighborhoods. No one is wearing political shirts, except for the ubiquitous “hands up, don’t shoot” shirts. Churches have stalls with food and water available. There’s no sign of any organized union presence, which is a shame, given the fact that they are spending millions on mobilizing their members to fight for Democratic Party politicians who have neglected the community. If they offered resources, support, and experience to the movement, it would go along way towards fixing the misconception that outsiders who genuinely want to offer support are not welcome in Ferguson.

Massive armored trucks move in, packed with police officers wearing body armor, tactical gear, and holding assault weapons and shotguns. Their entrance is clear to everyone, but in an effort to be less provocative, they park alongside and behind businesses. They are an occupying army. Most of the highway patrol and sheriffs are not from St. Louis. While the vast majority of the protesters are black, almost all of the cops are white. As the marches grow, they move towards the sidewalk, trying to keep people from congregating in groups. In the process, they antagonize and provoke, shining flashlights in people’s eyes, pointing weapons, etc. Most of the arrests have been in ones or twos. They cops line up or otherwise block the crowd, there is a standoff, and then the cops rush in pointing assault weapons to try to arrest a young person. If there is a response, rubber bullets and teargas are used. This tactic only serves to make things more tense. Hundreds have been arrested in this way.

From time to time, liberals, clergy, and elected officials come down to address whoever wants to listen. They tell people to stop “getting arrested for nothing”, failing to recognize that the radicalized black youth in Ferguson have inspired and raised the confidence of their entire generation. No matter what the approach, in the end the liberal’s argument is always the same: Go home, and let us handle this now. The youth of Ferguson know better and are deeply resentful of the betrayals of the previous generation who pushed the civil rights movement into the established halls of power. The youth is also conscious of how far this movement has come because of them.

This is why Jesse Jackson and Al Sharpton got booed when they came to Ferguson. Unable to contain the movement, they left in frustration. On Wednesday night, Iyanla Vanzant, a TV personality from the Oprah Winfrey network, came to Ferguson. She gathered about 75 people around her and began to address the crowd, trying to convince people to go home. While her camera crew scrambled for the best footage, the unnamed leaders of the movement in Ferguson began to question her. Iyanla played up the lack of coherent strategy, essentially telling the crowd they did not know what they wanted. People were frustrated. They have put their bodies on the line against impossible odds for almost two weeks. The mood coalesced into active resistance to her message. She then moved from the center of a circle to the outside; she tried to lecture the crowd. The crowd resisted, and the meeting fell apart. Iyanla’s entourage shuffled her away.

On Thursday, she started mobilizing for a meeting at 3:00 pm at the location of Mike Brown’s murder. She had posted a video promoting her “two week peace challenge”, trying to get people to stay home while the grand jury considers pressing charges against the cop who killed Brown. A large crowd gathered around, waiting. She and her crew arrived in a small convoy of SUVs with a handful of security people. At first, it took on the dynamic of a public meeting in the middle of the street, with the same debates about whether to stay or go. At a pre-arranged point, she told the crowd that she needed a microphone, and a small group sprang into action, shuffling the crowd to a pre-assembled media tent on the side of the road. She then announced that she had met with young people of Ferguson, and that she was creating a group called the “Mighty 13”, a group of young black men, who would play a leading role in the struggle. She presented herself as their coach.

This is the most recent attempt to co-opt the movement. The establishment had recognized that it could not regain control without a section of the young people of Ferguson. The Mighty 13 is all male. Iyanla played up their role as the warriors of the community, doing so at the expense of the numerous young black women warriors who have been on the front lines. They know this is not just about the experience of black men, and they resent the struggle being framed that way. Some of the 13 are genuine emerging local leaders, who have earned tremendous legitimacy from the last two weeks of struggle. Others are from outside of Ferguson, and are well connected with the Democratic Party machine. They introduced themselves to the crowd. To many, it’s a step forwards. After all, the establishment has finally recognized the role local youth are playing in this. But at the same time, it is clear that the “Mighty 13” are the new vehicle for the establishment to regain control in Ferguson.

Outside the demonstration, addressing a small crowd, was a young man named Travis. He lives up the street. I had seen him the night before on Fox News, brilliantly presenting the movement to offensive right wing pundits. He had not taken the time to watch the video of his interview. Travis had a part time job at Menards until the protests, but he lost his job in order to make sure he could be part of the movement. “It’s not a big deal. They never gave me any hours anyway,” he says. He is ubiquitous in this movement. He stays out all evening, leads marches, leads chants, and is willing to talk to people. He encourages people to stay, keep standing up, keep the movement alive. No one reached out to him to be on the Mighty 13. The night before, I met two young women, Josie and Peach, who have been there since the beginning. They both have full time jobs — one is studying at a local college. These are the real mighty youth of Ferguson, and they’re not backing down anytime soon.

Later that night, hundreds began gathering on West Florissant. The police moved in again. Chants transformed into marches. People joined the march as it moved up and down the sidewalk. Bystanders got swept into the march. At a certain point, they took the street, chanting into the night sky, their only audience themselves, reporters, and the dozens of heavily armed police sitting on military trucks. Travis was holding a banner at the front. The march lasted three hours. In between chants, I asked people what they thought of the “Mighty 13”, and the “two-week peace challenge”. Most looked at me, puzzled. “The mighty who?” The conversations invariably drifted back to the need for more people to come down and the need to keep fighting. Friday night is coming. It’s a working class community. Everyone expects things to grow over the weekend.