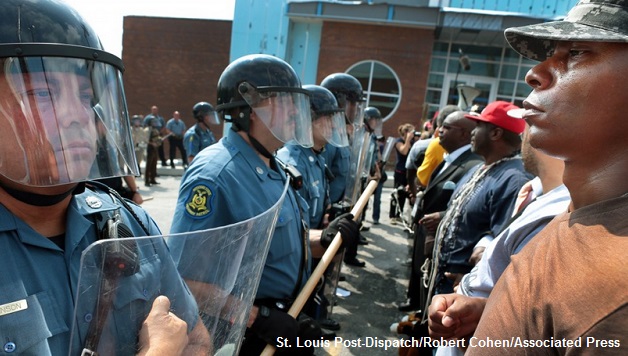 The scenes in Ferguson have gripped the national spotlight and gathered massive international attention. In the richest, most powerful country in the world, a whole community is brutalized while showing their anger against the unjust killing of a young man, Michael Brown. All eyes are on Ferguson, and this can be the start of a new black freedom movement to fight back against inequality and racism.

This is the text of a leaflet that is being handed out by Socialist Alternative members in Ferguson and St. Louis. To view the leaflet, click here.

The grand jury investigation is a farce. We need an independent investigation of organizations in the black community and the wider working class like the unions. To make this a reality, we need to get organized with mass meetings to discuss the next steps and our goals. This movement can spread throughout the country if we figure out what we stand for and it strikes a chord with poor people everywhere.

Protests nationwide against police violence are gaining inspiration from Ferguson, and this movement should be connected to calls for a $15 an hour minimum wage, fully-funded schools and an end to the racist “war on drugs”. The unions, with their influences and resources, can help build the struggles that can defeat this repression.

“You can’t have capitalism without racism.” -Malcolm X

This whole system, here and around the world, is based on exploitation. The super-rich get richer while working people get layoffs, budget cuts and mountains of debt. The two political parties are bought off by the billionaires. To get justice, we need to build a mass protest movement with clear demands and a party of workers and the poor that can challenge the policies of the super-rich.

Kshama Sawant is a Seattle City Council Member and a spokesperson for Socialist Alternative. She was elected last year with over 90,000 votes and led the successful fight for Seattle’s $15 an hour minimum wage.

I would like to express my deepest gratitude and solidarity to the people of Ferguson who have brought to light the immense institutional racism in our society. We live in a world of war, poverty, sexism, racism and environmental destruction, but it doesn’t have to be like this.

We can get organized to demand better. We won a $15 an hour minimum wage through protests, street campaigning and political action. We exposed the lies of the super-rich, and you are too. We do not live in a “post-racial” society. This is a country with racism built into its roots. To defeat police violence, racism and poverty we need to address the root causes in this system itself: capitalism.

Together, we can build a movement independent of the two parties for a world with good jobs, equal rights and dignity for all. We have a world to win, but we have to organize and struggle for it!