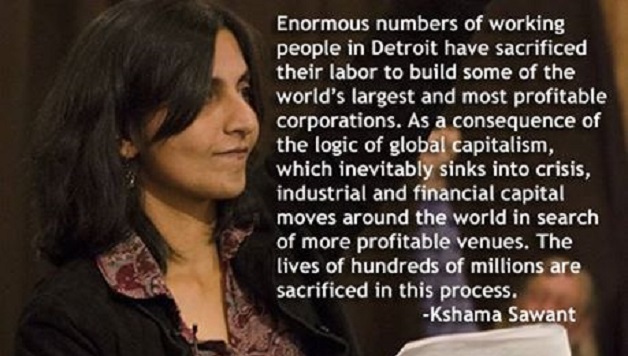 Last year, the Governor of Michigan staged a corporate takeover of the City of Detroit through his suspension of local authority and the appointment of an Emergency Manager. For the working people of Detroit, this experiment has been devastating.

Detroit is currently facing a war on water. Over 150,000 customers are late on bills that have increased 119 percent over the last decade. This inexcusable rate increase coincided with the worst economic crisis, and the greatest increase in income inequality, that we have seen since the depression. Instead of finding solutions, between 200,000 and 300,000 people face shut offs. That includes nearly half of Detroit’s minority population. This means mass humiliation and certain death for segments of the working poor and unemployed, especially children and the elderly, all because they cannot afford to pay monopoly prices for a resource that should be available to everyone simply by virtue of being a living being.

My office receives calls every week from Seattleites that are also struggling to retain their access to water. Detroit is not an exception, but just a more extreme example of the many crises and general insecurities the working class is forced to face under capitalism. Over the last three and a half decades, both Republican and Democratic politicians have worked hand in hand to undermine cities like Detroit through the promotion of so-called free trade policies. Enormous numbers of working people in Detroit have sacrificed their labor to build some of the world’s largest and most profitable corporations. As a consequence of the logic of global capitalism, which inevitably sinks into crisis, industrial and financial capital moves around the world in search of more profitable venues. The lives of hundreds of millions are sacrificed in this process. This is the very same logic which leads governments to strip water from a quarter of a million people in an age of massive corporate profits and excess.

From Detroit to Seattle, we have to organize and mobilize mass movements. We need to run independent, Left-wing, working class candidates who will fight back with a clear understanding of the situation and the struggle ahead.

I urge every resident of Seattle to check to see if they are eligible for the Utility Discount Program.

We also need to fight for measures like a millionaire tax to help address the deep inequality in Washington State.