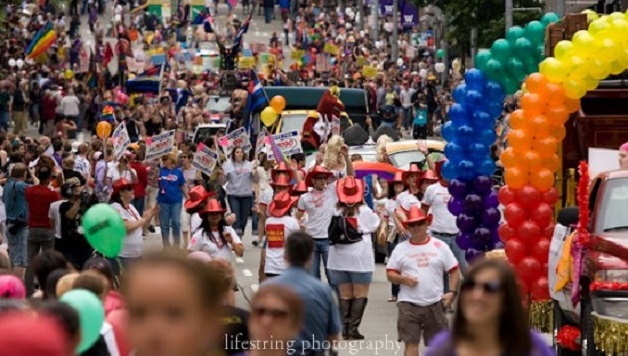 This year we march in our 40th Seattle Pride Parade, continuing the decades of heroic struggle by LGBTQ people for equal rights. Like all other victories for social justice, the strides made toward LGBTQ equality have been achieved not by a handful of politicians, but on the courage of millions of activists.

In recent years the movement has won marriage equality rights in 20 states and the District of Columbia. It has succeeded in outlawing discrimination based on sexual orientation in 21 states, including Washington DC and Puerto Rico, and discrimination based on gender identity or expression in 17 states. These legal victories were largely driven by a dramatic shift in public opinion which was achieved by years of grassroots activism and LGBT people demanding equal rights. The modern LGBTQ rights movement was born out of the Stonewall rebellion in 1969 in New York City when people successfully stood up against police harassment. Stonewall happened against the backdrop of the civil rights movement and growing radicalism, and it in turn inspired the birth of a massive gay liberation movement where hundreds of thousands of people came out of the closet and organized huge liberating marches across the country. The Gay Liberation Front founded in 1969 had explicit revolutionary socialist leanings and declared its solidarity with anti-colonial movements, the movement against the Vietnam War, and workers’ struggles.

However, a backlash developed that pressured the LGBT movement to moderate its demands to fit within the traditional social order and what was acceptable to the Democratic Party and its corporate backers. Today, more conservative elements have taken over the planning of Pride events in many cities.

Glen Greenwald documented this shift in an April 2013 article in The Guardian called “Bradley Manning is Off Limits at SF Gay Pride parade, but Corporate Sleaze is Embraced.” In the article, Greenwald discusses the role of corporate sponsors for San Francisco’s Pride events. Sponsors include AT&T, Verizon, Bank of America, Wells Fargo, Clear Channel, and Kaiser Permanente – all corporations that were either facing massive corruption charges, significantly responsible for the 2007-08 financial collapse, playing an important role in the U.S. security state, or spreading deeply conservative and homophobic views. Greenwald explains how the interlocking interests of these corporations, the military, and the Democratic Party set the agenda for San Francisco Pride, which led to the revocation of the invitation to Chelsea Manning to be a Grand Marshal at the 2013 Pride Parade.

The following year, intense public pressure ultimately forced the SF Pride Committee to back down, apologize to Manning, and invite her to be an honorary Parade Marshall this year – an important victory.

Despite the recent victories like marriage equality, there is still much to be done, particularly for working-class LGBTQ people and especially transgender people.

Recent studies belie the media stereotype of gay people as wealthy men. In reality, lesbian, gay, and bisexual adults are unemployed at a rate 40% higher than the national average (Center for American Progress); and LGBTQ youth make up over 40% of homeless youth (Huffington Post, Jan. 2013).

Socialists like myself have long supported the campaign for same-sex marriage rights, and we also see the importance of strengthening our movement by joining forces in demanding a society in which everyone has equal rights and all human needs are met. We need to demand reforms like equal hospital visitation rights for LGBTQ people, affordable housing for all, the closing of the gender pay gap, and a $15/hour minimum wage – reforms that will benefit not only LGBT people but all working people who we can ally with in a common struggle. LGBTQ people are regularly subjected to harassment and violence, even in Seattle. We’ve experienced a disturbing escalation of hate crimes in Capitol Hill. Despite our gay-friendly reputation, Seattle had the third highest number of anti-LGBTQ hate crimes in the U.S. last year (Seattle Times, 06/06/14).

Transgender people experience especially high rates of poverty, unemployment, and hate crimes, including murder. In 29 states, it is still legal to fire someone because of their sexual orientation. And in 33 states, people can be fired for being transgendered. And transgendered people are 28% more likely to experience physical violence, often at the hands of the police, than other lesbian, gay, bisexual and queer people (National Coalition of Anti-Violence Programs).

Despite all this, the major LGBT organizations, such as the Human Rights Campaign and the Gay and Lesbian Task Force, have focused on campaigns which do not ultimately challenge the fundamental causes of LGBTQ oppression, often failing to meet the needs of the majority of LGBTQ people who face constant economic and social injustice. These LGBTQ groups also rely on the Democratic Party and therefore limit their demands to what is deemed “achievable” by the corporate political establishment.

Socialists see LGBTQ oppression and sexism as rooted in capitalism, which promotes artificial, restrictive gender roles. Capitalist society needs to promote divisions among working people in order to preserve the extreme inequality on which it is based. It systematically attempts to marginalize and oppress LGBTQ people and movements, portraying them as threats to the patriarchal nuclear family. The politics of division are used cynically by a section of the establishment – the promotion of homophobia, sexism, anti-immigration sentiment and other prejudices serve to divert attention away from genuine anger at poverty and economic injustice.

We need a different kind of politics in order to target the root causes of LGBTQ oppression. While Republican politicians openly whip up homophobia, sexism, and racism, the LGBTQ movement needs to stop relying on the Democratic Party for modest piecemeal reforms. Instead, we need to build an independent political party that will unambiguously fight in our interests.

Obama and Democratic politicians have taken little initiative to fight for LGBTQ rights. Anti-discrimination policies implemented in states and by the Obama administration came only after LGBTQ activists led the charge over decades, built relentless mass pressure from below, and convinced a majority of Americans to support the basic rights of LGBTQ people.

We can multiply our collective power exponentially by uniting the LGBTQ movement with unions, environmental organizations and other social movements. We also need our own independent candidates and political representatives to challenge both the Republican and Democratic Party.