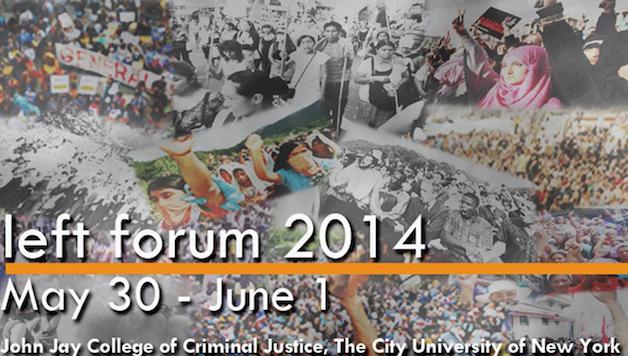 From May 30th to June 1st, activists, socialists and progressives from around the country will gather in New York City for the 2014 Left Forum.

This year’s Left Forum will likely be one of the biggest yet. Events over the past few years have radicalized thousands of workers, youth and students who have lived through the betrayals of the Obama administration, the dysfunction of the Congress, and the domination of big business while the economy sinks deeper into recession. This year is different because this radicalization is combined with both the lessons of past defeats and the energy of recent victories.

In 2013, we saw socialist ideas storm back onto the scene of US politics when Socialist Alternative ran candidates in cities across the country. We saw Ty Moore come within a few hundred votes of winning local office in Minneapolis, and Kshama Sawant defeat a 16 year incumbent for her seat on the Seattle City Council. In Seattle, we successfully transformed our campaign for local office into a mass movement to win a $15/hr minimum wage.

Just a few weeks ago, we saw the first major step towards victory in this campaign. On May 1st the Mayor of Seattle, buckling under the weight of this movement, moved a bill for $15/hr to the city council for a vote, the first of its kind in the nation. Though Socialist Alternative has some sharp criticisms of the Mayor’s bill, what is undeniable is that this turn of events has shattered the idea that bold working class demands are unwinnable. The fight for 15 in Seattle has shown that working class and socialist politics are not only effective, but vital.

The discussions that will be taking place at this year’s Left Forum reflect this turning point. The theme of this year’s Left Forum is “Reform and/or Revolution”. In their conference theme statement, Leftforum.org says, “As the system fails so many so badly, activists for democracy, sustainability, equality, and the abolition of oppression and exploitation increasingly grasp their shared demand for basic social justice. Fifty years of anti-communism, anti-radicalism, hesitant social criticism, and activists’ mutual suspicions are fading into irrelevance.” The theme of this year’s Left Forum echoes the burning desire of workers and youth to see a determined and independent mass force for social and economic justice enter into the fray.

Socialist Alternative’s presence will be bigger than ever at the 2014 Left Forum. We are leading and co-sponsoring numerous panels that reflect the scope and diversity of our work.

Kshama Sawant, Socialist Alternative City Councilmember in Seattle, will be speaking at two plenary sessions over the weekend. Kshama will speak on Saturday alongside Chris Hedges, and she will close the Left Forum on Sunday with Amy Goodman from Democracy Now!

Jess Spear and Phillip Locker, Socialist Alternative members from Seattle and leading organizers with the 15 Now campaign, will be leading the discussion on the Fight for 15 in Seattle and Beyond.

Workers today face a struggle for basic rights all across the country. Marty Harrison and Seamus Whelan, SA members and activists in nurses’ unions, will be discussing the fight for quality healthcare and union rights in their panel on Nursing, Unions, Healthcare and Socialism. Albert Terry and Grace McGee, SA members from Alabama, will be leading the panel on Fighting for Socialism in the Deep South.

The panels we are leading at Left Forum demonstrate the international character of our work as well. Alan Akrivos, SA member from New York and leading member of Occupy Astoria, will be discussing the struggle in Greece and the work of our sister organization Xekinima in our panel on Fighting Fascism and Austerity in Greece. Eljeer Hawkins will be discussing the recent election in South Africa and the events leading up to it in a panel about South Africa.

In the past year, our organization has seen the tremendous excitement that our campaign in Seattle has generated among working people who are hungry for an alternative. But we have also seen that big business is ready to fight back against any gains for working people. Join us at Left Forum, take part in the discussions, and find out how you can get involved in Socialist Alternative. Help us fight for an alternative to capitalism and a socialist future.