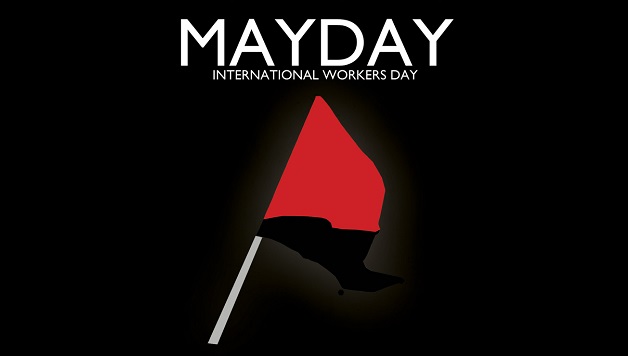 For a socialist world!

The first of May is traditionally the day of international workers’ solidarity, celebrated by class fighters around the world. Its origins lie in the 19th century struggles, mainly amongst manual workers in the United States and Europe, for the reduction of the working day to eight hours. The socialist Second International called for an international day of protest to be held at the beginning of May 1890 on the same date as the American Federation of Labor was planning to hold a demonstration on the issue. The May Day protest in London on the nearest Sunday to May 1st saw no fewer than 300,000 assemble in Hyde Park. Eight hours’ work, eight hours sleep and eight hours for leisure, family and cultural activities were inscribed on the banners of trade union, socialist and revolutionary organizations. A limit of eight hours on the working day was one of the first measures enforced by the revolutionary government in Petrograd after the October Revolution of 1917. It was seen as a vital measure not only to reduce the hours of toil but to give workers time to be involved in the democratic decision-making of the councils or ‘soviets’.

It is timely to remember this when capitalism in crisis has imposed in many countries working days without limit, and in some cases, the opposite – zero hours! In many countries laborers and landless peasants have always lived a precarious existence, not knowing if they will have work from one day to the next, let alone an income.

Now, because of the lack of fight from many leaders of workers’ organizations, saying there is no alternative, whole layers of the working class and some in the middle class, including in the so-called advanced economies, are paying the price of capitalism’s crisis and the rapacious greed of the bosses.

In the context of mass unemployment, those searching for work today, including even university graduates, find themselves thrown into the ‘precariat’. So-called contracts oblige them to be constantly ready for work, but they can find themselves not called (and not paid), for days and weeks, or working round the clock with no premiums, no safety provisions and sometimes also little or no pay!

The eight hour day and the minimum wage

The demands for a decent job for everyone in society and a 35 hour week, for wages that cover the cost of living, for free education, health and public transport are all modest when compared with the vast, extravagant spending of the super-rich. The gap between the 1% and the 99% is widening. In the campaign in Seattle, conducted by Socialist Alternative, for a minimum wage of $15 an hour, Councillor Kshama Sawant says the 1% is conducting an aerial bombing raid against the 99%. A fight-back is vital.

May Day is an occasion for socialists and activists to renew their pledges to fight for a different society – a socialist society. It is the day for honoring the founders of the socialist and trade union movement, the martyrs of the class struggle, the victims of wars and civil wars brought about by capitalist greed and exploitation. So it needs to be the day to step up the struggle against all forms of oppression and discrimination – class, caste, race, gender. It is a time to remember those who daily risk their lives in the factories, fields and building sites to create profit for their masters or to eke out a living for themselves and their families.

It is also the day to remember all those imprisoned for their beliefs by dictatorships and to demand the release of all prisoners of conscience world-wide.

As economists try to say that the worst of the world economic crisis is over, we see more and more millions of people driven into poverty – across Europe and the Americas, as well as in Asia and Africa. While in some countries, the number of strikes, general strikes and protests may be temporarily lower, there can be no doubt that anger is accumulating. Social explosions are inevitable in numerous countries.

In China, 25 years on from ‘Tienanmen’ and with a slowing rate of growth in the economy, the dictatorial regime is struggling to contain mass discontent. Significant work stoppages have been seen in the recent period, with the struggle over jobs, wages and workers’ rights gathering momentum. Mass demonstrations against pollution, for press freedom and other democratic rights continue to challenge the grip of the one-party state.

The urgency of building a political voice to conduct the struggle for genuine socialism in China and elsewhere grows apace. In countries where the traditional voice of labor has fallen silent, the need to build new workers’ parties increases by the day. The 99% in society – those who own and earn little or nothing – must make themselves heard through action and organization.

Socialist programs and internationalism are vital. Public ownership and democratic planning are the only way to provide jobs, homes and sustenance for all in society.

The Committee for a Workers’ International is celebrating its forty years of existence just as commemorations of the First World War begin. It is timely to remember that the leaders of the Social Democratic Parties who turned out on May Day, 2014, to sing the praises of workers’ internationalism, within months were supporting their own governments’ imperialist aims which entailed the slaughter of millions of workers, poor farmers and young people across the globe.

Among the small band of revolutionary socialists who met in Zimmerwald the following year and declared their total opposition to the imperialist war, were those who carried through the overthrow of capitalism in Russia in October 1917. Immediately after the revolution, May Days in Moscow, St. Petersburg and across the Soviet Union were joyous and colorful festivals celebrating the solidarity of the workers of the world. Buildings were festooned with decorations designed by revolutionary artists.

As Stalin and his clique usurped the revolution, and moved against workers who challenged their power – nationally and internationally – May Day was turned from a commemoration of the struggle for international socialism to a glorification of the might of the ‘soviet’ state machine. In many other countries, too – East and West –the revolutionary content of May Day was suppressed. In some countries like North Korea and China, it has become a travesty; in others, a mere commercial opportunity!

The task is starkly posed of restoring the real meaning of May Day and reviving the best traditions of the pioneers of the workers’ movement – internationalism and the struggle against war and oppression. The destruction of the environment which gathers pace as long as capitalism survives adds urgency to the struggle for a socialist world.

Members of the groups and sections of the Committee for a Workers’ International will be celebrating May Day 2014 in practically every time zone of the world. From Seattle to Sao Paulo, Stockholm to Berlin, Brussels to Bangalore, from London and Lagos to Johannesburg and Lahore, from Moscow and Melbourne to Tel Aviv and Warsaw, Santiago and Hong Kong to Quebec and Toronto, from Vienna and Cochabamba to Tunis and Lisbon, from New York and Kuala Lumpur to Glasgow, Dublin and Belfast, from Paris and Almaty to Athens and Nicosia, from Ankara, Amsterdam and Caracas to Barcelona and Madrid.

Greetings to all workers and socialist fighters! The most decisive struggles to transform the world on socialist lines lie ahead.