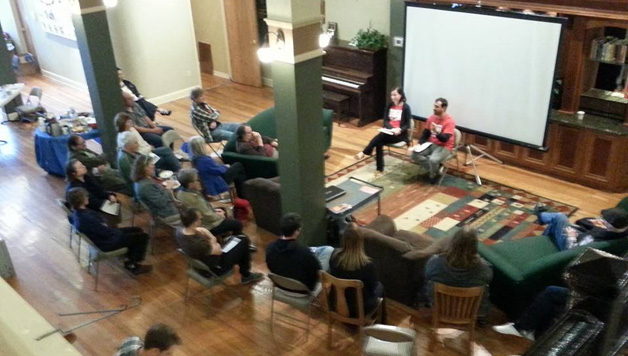 The event was the culmination of a month of organizing and action in Washington State’s second largest city, which began with a 15 Now! march and picket by 35 activists and workers on one of Spokane’s many “fast food alleys.” The march received support from local unions and a positive response from passersby as well as coverage from the local affiliate of a national TV network.

Then on April 2, Socialist Alternative Spokane members and others set up an informational table at the minimum wage “debate” organized at Gonzaga University by the right-wing Washington Policy Center. Ten people leafleted and engaged those arriving at the event while other pro-$15 supporters attended the event.

Socialist Alternative Spokane has been holding branch meetings since the beginning of the year, discussing core readings, analyzing world affairs, and planning actions. Next up? Members of the Spokane branch of Socialist Alternative and others will attend the crucial national conference of 15 Now on Saturday, April 26th in Seattle.

Socialist Alternative Spokane has sprung to life out of the town’s legacy of 19th century radical labor protests and in the midst of current concerns about coal and oil trains passing through the Spokane rail chokepoint, our endangered aquifer, the fight for police accountability, the role of Fairchild Air Force Base in global imperialism, and the numbers of workers suffering in the depressed climate of the post-2009 economic collapse. We call on all working people to join us to build the Spokane branch of Socialist Alternative and join us in Seattle on April 26th for the 15 Now campaign.