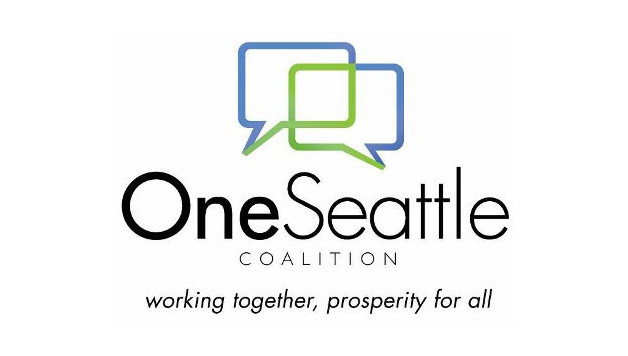 15 Now fights for a minimum wage of $15/hour plus full tips which belong to the workers – OneSeattle wants a tip deduction to reduce any minimum wage increase.

The people of Seattle are on the cusp of making history. Over 100,000 workers in Seattle – 24 percent of all workers – stand to be lifted out of poverty by the passage of a real $15 an hour minimum wage.

The implications of this have not been lost on big business, whose ability to influence political debate has been boosted by recent Supreme Court decisions allowing them unlimited spending on politics.

Now big business is rolling out a new organization called OneSeattle, designed to appear as a grassroots organization, yet run by Starbucks, Alaska Airlines, big grocery companies, and the Washington Restaurant Association (WRA).

Recently, The Stranger published a leaked email from OneSeattle that outlines their strategy: spread lies. “One bar owner reportedly said 20 bars and restaurants had a meeting with tipped employees to, according to the memo, spread the idea that 15 Now wants to get rid of tips entirely.”

This is a scandalous lie.

We say clearly to tipped workers: We support a full $15/hour minimum wage for you and all Seattle’s workers. We support you keeping all your tips, on top of the minimum wage, as Washington state law currently states. OneSeattle wants to take your tips by deducting them from your wages, a way of legalizing the widespread practice of wage theft.

We ask you to consider: who is really trying to take your tips?

At a city council hearing one of the owners of Pagliacci Pizza testified that if the minimum wage was raised for tipped workers “We would talk about removing the tip line from our receipts.” (kirotv.com, 4/9/14)

The WRA’s parent organization – the National Restaurant Association who represents McDonalds and other fast food giants – has spent millions to keep the federal minimum wage for tipped workers at $2.13 an hour. Tipped workers are twice as likely as other workers to live in poverty.

OneSeattle has hired a giant PR firm to craft their message: “prosperity for all.”

But who would believe big business supports prosperity for all at a time when corporations are making record profits and working people face record poverty? It’s big business that crashed our economy in 2008 and has stacked the deck against workers and small businesses.

When was the last time the state legislature had a special session to give $8.7 billion in tax breaks to small businesses like they did for Boeing? Boeing’s handout was destructive and divisive – it will be paid for by slashing funding for critical social services and raising taxes on working people and small business.

Don’t Let Them Divide Us

Big business is pushing their agenda of avoiding paying a $15 minimum wage. OneSeattle claims to be for $15 but at the same time advocates “unity” around deducting tips, healthcare costs, and other benefits from the minimum wage.

The true aim of OneSeattle is to divide and weaken the vast majority of Seattle that supports a real $15 an hour minimum wage for all, without exemptions or deductions.

We need unity, but not the fake unity around the interests of big business. We need unity of Seattle’s residents, workers, communities and small businesses for a real $15 an hour minimum wage that addresses the corporate-driven inequality in Seattle.

On April 26, hundreds of Seattle area residents will come together for a real grassroots conference of 15 Now. We will democratically consider a ballot initiative in the event the city council fails to deliver on the promise of a strong $15 an hour minimum wage. Join us in creating the kind of unity that can halt the greed and destructiveness of big business.