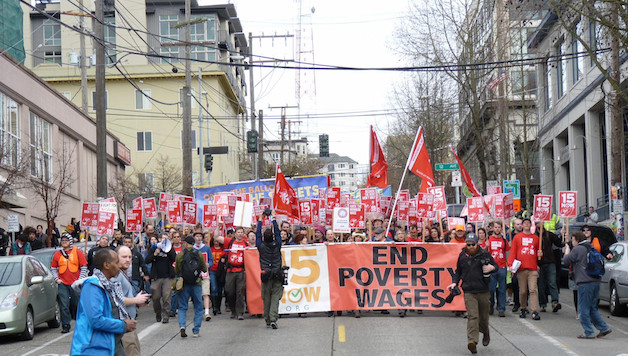 Reports from the national day of Action March 15th are pouring in from across the country, while in Seattle 750 protesters took to the street and made clear their strong support for a real $15/hr minimum wage.

Labor activists, 15 Now volunteers and low-wage workers rallied to chants of “Tip Credit? Forget it!,” warning against a proposal full of loop-holes and exemptions, such as lower wages for tipped workers or a so called “total compensation” package which would attempt to count everything from health benefits to bus passes toward a minimum wage of $15.

While the Mayor’s Income Inequality Advisory Committee continues to discuss what to recommend to the City Council, 15 Now insists on the need to prepare a back-up option of a ballot initiative to defend against business’s attempts to undermine minimum wage legislation.  The movement’s next big mobilization will be the April 26th conference “Onto the Ballot, Into the Streets”, which will launch the massive campaign to collect the 21,000 signatures required to put a robust $15 minimum wage on the November ballot, should it become necessary.

Paul Bigman of the King County Labor Council Executive Board emphasized the need for organized labor to fight for bold demands to raise the living conditions of all working class people, and that a $15 minimum wage is just the beginning.  Shaunie Saelee from WA Yell highlighted the need for young people to engage with labor struggles and Pat Scott, a striker with OUR Walmart, described her experience with workplace retaliation.  Paula Lukaszek spoke from WFSE Local 1488 on the effects of poverty wages at the University of Washington and announced that their local will be voting on donating $20,000 to 15 Now.

James Bible of the NAACP pointed to the movement’s successes in giving a voice to the growing anger against wealth disparity, saying “I have a new idea of what a thug looks like – a thug sits in a corporate office in a suit and thinks he’s earned the privilege to exploit you as a worker.”

The confidence and energy of the rally demonstrated a strong commitment to continue the grassroots pressure on the Mayor’s Income Inequality Committee to produce a robust $15/hr proposal, and to grow the movement of labor, low-wage workers and activists to push forward on a strong $15 ballot initiative out of the April 26th conference.

Philip Locker, representing Socialist Alternative, argued for an independent party for working class people, and called on the recent Boeing handout of $9 billion from the state of Washington as a symptom of the problem.  “If the politicians in Olympia and Seattle weren’t beholden to the super rich, to big corporations, we could implement taxes on these corporations to financially support non-profits and small businesses,” said Locker.  “We agree that small businesses need support, that human services need full funding — that support was the $9 billion that Boeing hijacked, with agreement from Washington state representatives.”

At the end of the rally Kshama Sawant, Seattle’s socialist City Councilmember, spoke and proposed a new policy proposal for a $15/hour minimum wage which she plans to introduce to the Mayor’s Income Inequality Advisory Committee on March 26.

Here are excerpts from the speech addressing her proposal:

“It’s time, my brothers and sisters, to understand that if we are to have a say in our own economic futures, we cannot be passive bystanders in the decision-making. Business has most of the seats at the Mayor’s committee.¨

¨The Mayor said this week that probably there needs to be a phase in for very small businesses. What should we conclude from that? Well, one would think that for the Mayor ‘very small businesses’ are his real concern. And if so then big business should pay $15 now. No questions. No more hollow discussion. Time is running out, we cannot forever wait for others to put their proposals forward. So let’s make this concrete.¨

“This is our proposal. We have responded to their stated concerns. Now we will see if the concerns about small business and non-profits are genuine. Without small business to hide behind, will big business show its face?”

“Time is short. We want the city council and the Mayor to act. But if they don’t, we need the backup option, the safety net, of a ballot initiative. On April 26th, we as a movement will be coming together again, this time for a conference. Our conference, “Onto the Ballot, Into the Streets” will assess the progress of the Mayor’s Committee and whether we need to begin collecting signatures for a ballot initiative.”

“The deadline to turn in signatures for a initiative to qualify for the November election is June 10. The City Council needs to take clear decisions by then, or else they are asking us to give up the option of a ballot initiative if they fail to deliver.”

“We can come together again in early June to decide whether to go ahead with an initiative. But first we will need to go Onto the Ballot and Into the Streets in May to make sure our options are open.”

“Let’s use the next two months to hit the pavement and build a grassroots movement like Seattle has not seen in a long time. Let’s get a firsthand experience of the power of working class solidarity – where we stand up for the interests of everyone – workers and the unemployed, the poor and oppressed, of all races and color, immigrants and American-born, elderly and disabled.”