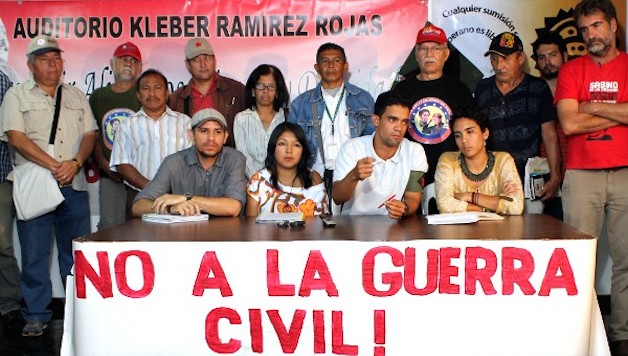 The Consejo Popular Revolucionario (CPR or Popular Revolutionary Council in English) is an new revolutionary autonomous grouping of around 30 different revolutionary organizations, diverse social movements, collectives and groups of activists that has been founded in response to the critical situation unfolding in Venezuela today. The urgent need for revolutionary organisation, to not only defeat the new right wing offensive, but to defend the gains of the Bolivarian Process and take them forward towards revolutionary socialism could not be clearer. During the launch, attended by over 100 people, many activists spoke about the critical need for decisive and bold steps to be taken in the current crisis.

Until now, 28 people have officially been killed as a direct result of the protests that have gripped the country for the last month. In some areas of the country, such as Táchira, Zulia and Merida states the infiltration of right wing pro-Uribe Colombian paramilitary groups from outside and within the country as well as the partial militarization of these areas by the National Bolivarian Armed Forces (FANB) gives the dramatic visual impression of a country in war-like conditions.

Activists at the assembly spoke of some municipalities in Táchira state, which are virtually controlled by paramilitaries and where it is necessary to pay exorbitant prices to them for the most basic necessities such as gas, water and food that are also extremely scarce. In many areas of the state the ’guarimba’ (road blocks organised by supporters of the right wing) have brought public transport to a halt as well as ordinary daily life. According to activists after 5pm the streets are like ghost towns and most people are too scared to go out on the street.

This situation is not unlike that in Merida, where a new rein of fear has emerged since the recent death of a Chilean student, Giselle Rubilar, who was tragically shot and killed as she, along with other residents, tried to clear a road, blocked by right wing students. In Carabobo state 3 people were shot and killed on the 12th of March as student protests took place to mark the one-month ’anniversary’ of the commencement of the protests. In Caracas two people were recently shot and killed by a sniper during a confrontation between a motor taxi collective and right wing supporters in a middle class residential area. These shootings are not dissimilar to those that took place in the lead up to the 2002 coup, which aside from the random appalling assassination of individuals, are aimed to generate an atmosphere of instability and terror in the country.

The risks of a further escalation in violence as well as pressure exerted by the right wing, supported by US imperialism, to overthrow the Maduro government and ’Chavism’ are clear to revolutionaries in Venezuela. This ’overthrow’, although highly unlikely to come in the form similar to the 2002 coup that was supported by a wing of the military, could take different forms. In the face of spiralling violence, the ongoing economic crisis, combined with a conscientious plan of sabotage by sectors of the far right and the more moderate right’s ability to coopt sectors of the working class and poor, among others things, could see an agreement of ’transition’ and the calling of new elections.

The action taken until now, by the Government has done little to prevent this. The government has invariably called for peace, reconciliation and negotiation as well as the mobilisation of the working class and poor to defeat the right wing. In recent weeks, while correctly criticising and rejecting imperialist offers of ’mediation’ and more recently rejecting the Obama government’s outrageous and hypocritical attacks, the Maduro government has contradictorily continually called on leaders of the right wing to come to Miraflores to talk and has gone as far to say he would welcome the right wing student leaders with a hug and a kiss! He also has repeatedly stated that this ’Christian-Humanist revolution’ will not be defeated.

Such a ’transition’ would be a defeat for the revolutionary left and the working class and poor both nationally and internationally. While the CPR defends the gains of the last 15 years and the legacy of Chavez, those participating agree that much more than peace talks and reconciliation is required to defeat the right and that the need for organisation and revolutionary socialism is an urgent task.

The organisations and individuals participating in the CPR are not the only ones around the country expressing the need for action and steps must and are being made to unite these forces. We, Socialismo Revolucionario (CWI in Venezuela) are calling on all revolutionary and left parties as well as left elected representatives and trade unions internationally to urgently send messages of solidarity to express support for the CPR and struggle against this new right wing offensive. Messages can be sent via email in Spanish or English to socialismo.rev.venezuela@gmail.com.

International supporters of the initiative must also be alerted to the recent threats of ’sanctions’ by the Obama administration and of the need to, if necessary, organise urgent pickets at embassies against such imperialist attacks, in defence of the gains of the Bolivarian Process and in support of revolutionary movements within the country who are fighting for socialism.

The first assembly of the CPR agreed the following statements and actions:

1) We consider that the recent events are aimed to create the conditions for a conflict in Venezuelan and put the Venezuelan state, its armed forces and the integrity of the nation at risk.

2) The starting point for this conflict is in the invasion of paramilitary forces from Colombia, supported by the Obama Government and the reactionary ex-Colombian president Uribe, and allied with the reactionary right wing of the Mesa de Unidad (Venezuela) namely the Primera Justicia and Voluntad Popular parties, who together currently control the state of Táchira. These forces are now attempting to move into Merida and Zulia state and plan to move further east as control is gained towards Caracas thereby unleashing chaos, road blockages leading to further food and goods shortages. Such action aims to create an environment that lead to the overthrow or transition of the Maduro Government and Chavism, which in such circumstances could create the conditions for civil war.

3) In the face of this threat we must unite all the popular, progressive, patriotic and revolutionary forces under the objective to restore our national territorial integrity through Integral Committees of Popular Defence in every state, municipality, sector, barrio, urbanisation, centres of production, health, food distribution and production and education.

4) We call on all progressive and revolutionary sectors to hold meetings and organise Popular Councils to organise the Committee of Defence which should have two objectives of action: citizens control of food production and distribution, control of public services including health, transport, gas, water, electricity, and education.

5) We propose dialogue with all sectors including the middle classes, who are opposed to handing over the sovereignty of Venezuela to imperialist and pro-Uribe forces and a right wing national government, which would be supported by these elements.

6) We call for mass national revolutionary action to free the states of Merida, Zulia and Táchira from the control of right wing paramilitaries through the establishment of the Defence Committees. The first part of such action will be a through actions and marches in every major city and town commencing on the 13th and April and culminating in a people’s assembly in the capital of Táchira, San Cristobal on the 19th of April.

Mass Revolt Against Regressive Tax Reform and the Right-Wing Government