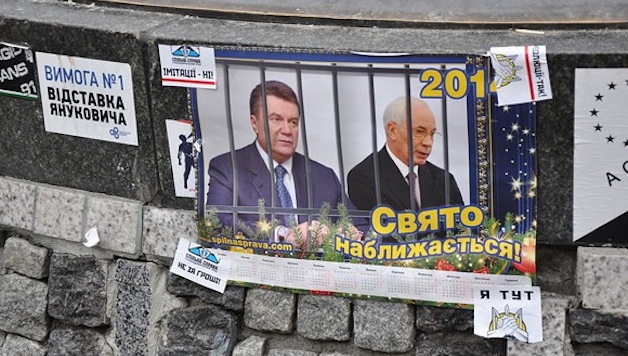 The latest developments in the Ukraine saw the dramatic overthrow of President Viktor Yanukovich and his flight from Kiev. Mass discontent at grinding poverty and a corrupt, brutal regime finally erupted into a revolt in Kiev and many parts of Ukraine last November.

But the lack of a working class alternative allowed reactionary forces, with western imperialist backing, to dominate the protest movement. As a new pro-western regime is being consolidated, ethnic divisions dangerously deepen among the 46 million-strong population.

Following bloody clashes between protesters and police in central Kiev, which saw over 80 killed and hundreds injured between 18 and 21 February, leaders from Germany, France and Poland negotiated a deal with the crumbling Yanukovich regime. The EU-mediated agreement envisaged forming a ‘national unity’ government, holding presidential and prime ministerial elections in November and re-instating the 2004 constitution, which would strip the presidency of some key powers.

But the agreement quickly collapsed as the right-wing opposition, which includes ultra-nationalists and fascistic elements, went on the offensive and pushed their advantage home. Parliament impeached Yanukovich and appointed the Fatherland Party figures, Arsen Avakov and Oleksandr Turchynov, as Interior Minister and Speaker of the Rada (parliament). Turchynov, a close ally of former prime minister Yulia Tymosehnko, who parliament released from prison on 22 February, is also Acting President. Turchynov is attempting to form a new coalition government this week and new presidential elections will be held on 25 May. Arrest warrants were issued for Yanukovich and other former ministers.

Even MPs from Yanukovich’s Party of the Regions voted for the measures, as his former party colleagues desperately tried to distance themselves from the deposed regime. The parliamentary leader of the Party of the Regions condemned the ousted president for having made “criminal orders”. Powerful oligarchs who until recently were close allies of Yanukovich, and who saw his alliance with Russia in their interests, have opportunistically swung to the new regime.

The Kremlin reacted furiously to events and denounced what it considers a western-backed “coup” lead by “armed extremists and pogromists”. The removal of Yanukovich represents a serious setback for the Putin regime, which regards Ukraine as strategically vital.

The Kremlin has made big efforts to bring its close neighbour into further economic and political alliance. Last November Moscow agreed a $15 billion package with Kiev after Yanukovich rejected an EU ‘association agreement’. This intensified the international struggle among imperialist powers for influence over Ukraine, which is also an important geo-strategic territory for the US and Nato.

The rejected EU deal sparked opposition protests in Maidan Square, central Kiev, which were, to begin with, mainly made up of middle class people and students. Many have illusions that closer association with the EU will bring prosperity and democratic rights, despite the fact that the November EU deal was linked to a harsh IMF austerity package, which Yanukovich correctly feared would have led to an explosion of mass protests.

It was riot police brutality against protesters that led to greater numbers taking to the streets in Kiev and Lviv and across the Ukrainian-speaking western part of the country. Unrest over the cancellation of the EU deal soon evolved into mass anger at poverty, economic stagnation and the corrupt, incompetent and authoritarian Yanukovich regime.

While working people have become increasingly impoverished, Yanukovich and the ‘Family’ of cronies that surrounded him became enriched. There were even anti-regime protests in industrialised, mainly Russian-speaking eastern Ukraine, which was Yanukovich’s political base.

The corrupt regime was quickly exposed as having very little popular support. This was underscored when protesters opened the gates of Yanukovich’s main residence and exposed his opulent lifestyle (although the western media chose not to shed light on the similarly obscene wealth of pro-western oligarchs and politicians).

But in the absence of strong workers’ organisations it was not possible to harness this mass opposition to Yanukovich for a united mass movement of the entire working class of Ukraine, that could straddle all ethnic, religious and language divides. Although many individual workers went onto the streets, the revolt – at root, against the brutal and corrupt Yanukovich regime and rule of the oligarchs – was not led by the working class, acting as a class for itself. The majority of working class opposed the regime and the oligarchs but they were largely passive. The working class did not leave its imprint on events in an independent and organised fashion.

Instead, from the start, reactionary forces were able to step into the vacuum, with western powers’ backing, and to cynically exploit the masses. Right wing, pro-capitalist opposition politicians, like Vitali Klitschko, the former heavy weight champion boxer, and Arseniy Yatseniuk, who is linked to the Fatherland Party, took the lead.

They closely allied themselves with ultra-nationalists, the far right and the neo-fascist groups. Over the last three months, the anti-Semitic Svoboda party and the far-right Right Sector played a key role in orchestrating street fighting and the occupation of government buildings.

The thoroughly reactionary character of the new regime and the fears it engenders can be seen by the call by Rabbi Moshe Reuven Azman for Kiev’s Jews to flee the city. The new interior minister stated that the Maidan ‘Self-Defence Forces’ will be incorporated into the new regime structures. Svoboda party leaders will expect to hold office in a new regime.

Parliament’s provocative decision to reduce the status of the Russian language led to more calls for secession in the Russian-speaking south and east of Ukraine. Thousands protested in Sevastopol, in Crimea, a crucial naval base for Russia’s Black Sea fleet, waving Russian flags. They voted to set up a “parallel administration” and “civil defence squads”.

Over the weekend, Susan Rice, the US national security adviser, warned Putin that it would be a “grave mistake” for Russia to intervene militarily. The head of Nato’s military command in Europe held talks with Russia’s top general on 24 February, as western countries tried to ease tensions with Russia.

Moscow has encouraged eastern Ukraine regional leaders to oppose Kiev’s rule and to move towards greater ‘autonomy’. It remains to be seen how far this process will go but if significant regions were to secede, the wounded Putin regime could well raise the stakes and carry out armed intervention.

Competing oligarchs and aggressive meddling by western and Russian imperialism have pushed Ukraine dangerously closer to a messy process of disintegration, if not outright bloody partition or ‘cantonisation’.

Putin retains powerful economic influence over Kiev. More than half of Ukraine’s exports go to Russia and Russia supplies Ukraine’s gas. The Moscow regime could cause real hardship to Ukrainians by revoking a 30% cut in gas prices within days.

Neither Brussels, with US backing, nor Moscow and its oligarchs, are acting in the interests of working people in Ukraine. Whether it is Yanukovich or the new pro-western regime in power in Kiev, they act to defend the interests of the super-rich, including by enforcing austerity policies on the mass of Ukrainians.

With Russia signalling it will freeze its $15 billion bailout for Ukraine, western leaders talk of putting together a financial “rescue deal” to save the country from bankruptcy. The new Kiev regime says it needs $35 billion over two years to stop the economy “heading into the abyss”. Economic growth in 2013 was zero and the currency, the hryvnia, lost more than 8% of its value in three months.

The Financial Times reported that the EU and US made clear that “no bailout would be agreed without a new government willing to commit to economic reform”. Jack Lew, US Treasury secretary, emphasised the need to “implement reforms that could be supported by an IMF programme” (synonymous with austerity and privatisation).

A striking feature of the last few weeks was that despite the ethnic divide working people everywhere expressed strong opposition to the entire political elite and their oligarch backers. Working people across the country want an end to mafia-regimes and the oligarchy and yearn for a different society, where they can have democratic rights and decent living standards.

Opposition leader, Julia Tymoshenko, was “received politely but by no means rapturously” according to a Guardian reporter, when she addressed crowds at Maidan Square, following her release from Kharkiv prison hospital. Many Ukrainians well remember that Tymoshenko, the hero of the 2004 ‘Orange Revolution’, went on to become prime minister in a corrupt regime that carried out cuts to their already low living standards.

The new pro-western capitalist rulers will hope for a honeymoon but sooner or later will come into collision with the interests of the Ukrainian working class. The crisis of the last few months brings home the urgent need for working people to build their own class organisations, including genuinely independent trade unions. This has proven to be a protracted and difficult process, so far. This is not surprising given decades of rule under Stalinism, which did not countenance any genuine working class self-organisation, followed by the collapse of the former USSR and the ‘shock therapy’ restoration of capitalism. Political consciousness among the masses is bound to be disorientated and confused under these circumstances.

Yet working people are drawing important lessons from events. They have gone through the deeply disappointing ‘Orange Revolution’ and the rule of Yanukovich. Now the likes of Turchynov, Klitschko and Yatseniuk and other pro-western big business politicians will be exposed.

Increasingly more sections of the working class will realise that only way forward is to build an independent mass, multi-ethic workers’ party that rejects reactionary nationalism, the oligarchy and all imperialist interference. A socialist party with mass support that forges the unity of all workers across Ukraine, would campaign for a workers’ government to take over the huge wealth of the oligarchs and to nationalise the big banks and corporations, as part of a democratically planned economy run for the benefit of the vast majority. Such a struggle would find a ready response from the workers of Europe, Russia and the region.