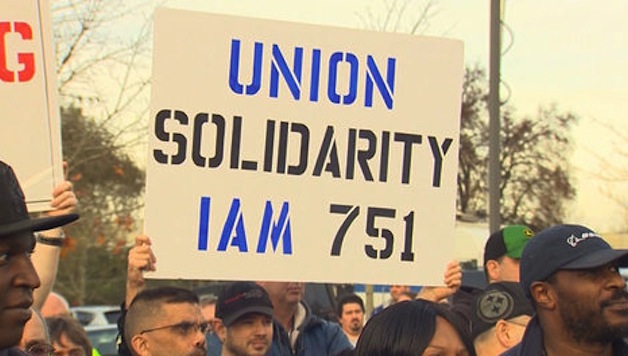 Boeing’s recent “economic terrorism” (Kshama Sawant) has fueled upheaval within the machinists’ trade union, the International Association of Machinists and Aerospace Workers (IAM). The company threatened to move part of the production for Boeing’s new 777x commercial jet out of Washington state unless workers agreed to give up their defined pension benefit plan for a much worse 401K plan, along with concessions on wages and healthcare.

Democratic Party governor Jay Inslee supported the blackmail with an almost $9 billion tax cut for the highly profitable, government-subsidized airplane monopoly. Despite strong opposition to concessions from the membership of the IAM, the international president of the union R. Thomas Buffenbarger used his position to push for machinists to approve the deal.

Outraged IAM members are now taking important steps toward reclaiming their union from what they feel is an entrenched leadership that has failed to defend their interests. IAM members at Boeing have launched a rank-and-file caucus, and for the first time in 52 years, the entire 500,000 strong membership of the IAM will soon have a direct election for the leadership of their union.

In that election, members will have the opportunity to vote for a slate of reform candidates lead by Jay Cronk, the former Transportation Coordinator for the international office (called the Grand Lodge). The reform slate won the support of more than 25 locals in nomination elections across the country on February 8, triggering the contest. The slate is calling for regular elections, more transparency, slashing the bloated salaries of officers, and ending expensive perks for union leaders.

Boeing is only the latest black eye for Buffenbarger, who pulled in a whopping $304,000 in compensation last year. The membership has declined more than 14 percent in the last ten years and IAM members’ benefits have been under a continued assault.

The challenge of the reform slate represents an important step toward democratic unions with real checks that hold union leaders accountable to the interests of the members. Meanwhile, the dispute at Boeing poses important questions over strategy for how jobs and benefits can be defended in the coming years.

Concern among members about the current leadership’s role in the new Boeing contract has spurred on the reform challenge. All four locals of District 751, representing 31,000 workers at Boeing in Washington state, endorsed the reform slate which includes Jason Redrup, a staff member of District 751.

Despite a record high stock price, Boeing demanded mid-contract concessions on pensions, healthcare, and wages from the IAM. The company proposed locking the union in with a 10 year contract and a no-strike pledge.

Boeing blackmailed the workforce with threats to move some jobs for the production of their new 777x commercial jet out of Washington state if the IAM membership did not agree. Virtually the entire establishment of Washington state intervened in the dispute and campaigned for a YES vote by spreading fears that the future of the state economy depended on machinists giving up their hard-won benefits.

Democratic Party governor Jay Inslee led the charge for Boeing and sweetened the pot with a historic $8.7 billion tax break. Only 13 of the nearly 150 members of the Washington state House and Senate voted against this corporate robbery, showing how both parties – including Democrats, Republicans, and Tea Party politicians! – are bought and owned by corporations like Boeing.

District 751 President Tom Wroblewski called Boeing’s contract offer “a piece of crap” and tore it up at a meeting of machinists. In a column titled “Anguish we can understand” Seattle Times columnist Danny Westneat responded, “[Wroblewski] could just as well have been anguishing for depressed workers everywhere.”

In November, machinists overwhelmingly voted down Boeing’s concession by two to one. The company put forward a new proposal in December, but it contained the same fundamental attacks on pensions, healthcare and wages.

The executive board of IAM District 751 opposed the second vote. But, president Buffenbarger went over the heads of District 751 and ordered a new vote to take place. He then sent in his own staff to campaign on the shop floor for a YES vote against the District 751 leadership.

The second vote passed. But, not without controversy. The vote was announced on December 21, four days before Christmas, and it was held on January 3, before many workers had returned from their holiday vacation. Workers say the turnout on January 3, was more than 7,000 lower than it was in November, and the contract passed by a narrow 600 votes.

The National Labor Relations Board in the Seattle area has since received more than 40 complaints against both Boeing and the IAM international leadership over how the vote was handled. Many machinists say the vote was purposely rammed through at a time when many senior workers were still on vacation to help boost the YES vote.

The NLRB is stacked against working people, and unlikely to overturn the vote. But, why should union members have to rely on the two-corporate-party-dominated government to address internal union grievances?

The reform candidates’ support for increased democracy, transparency, and accountability are getting a a big echo among some machinists. Socialists support the best democratic traditions of the labor movement including the right to recall union leaders, and limiting the pay of full-time union officers to the average wage of the workers they represent.

However, one questions raised by the Boeing concessions gets to the heart of a key issue facing the union: How can hard-won benefits be defended while also preventing Boeing from moving more production out of Washington state?

Boeing has already begun to move jobs out of Washington. Some of the 787 Dreamliner assembly is done at a new factory in the “Right to Work (for less)” state of South Carolina. Days before the second contract vote on January 3, Boeing announced plans to more than double their facilities in South Carolina with speculation that the new 787-10 might be built there.

Many machinists at Boeing had genuine fears that more jobs would be lost if they did not approve the contract, contributing to the support for the YES vote. Many machinists who voted NO say Boeing was bluffing. They point out that Boeing has already begun expanding the factory in Everett, Washington in anticipation of the new 777x.

The recent battle was over whether Boeing would produce the wing of the 777x in Washington. Boeing’s strategy is to bust the union by outsourcing some production, then using the fear of further lost production to leverage concessions.

There are limits to what Boeing can produce outside of Washington state. Boeing is reliant on a highly skilled workforce in an industry that requires precision work. Problems with the most-outsourced airplane produced by Boeing, the 787 Dreamliner, has underlined the limits to what can be done outside of Washington. The Seattle Times reported on February 3, that a “skills shortage” in South Carolina has set back deliveries of the 787 and lead to costly fixes that need to be done by IAM members in Washington state.

For the moment, the highly-skilled machinists in Washington have a big advantage. Boeing has a massive back-order of planes and will not be in the position anytime soon to produce what it needs somewhere else. However, while the skills of the Washington machinists are an advantage, it’s something that can be undermined over time as production moves forward in other areas and skills are developed.

In the coming years, Boeing is likely to continue to take the same approach with threats of expanding production outside of Washington state unless they get huge concessions. Even with the current contract in place until 2024, these issues could reemerge sooner as Boeing has already reopened an existing IAM contract twice to concessions since 2011.

Unite to defend jobs and benefits

Boeing workers are incredibly powerful when they are united. But the unity of Boeing workers has been weakened by Buffenbarger’s divisive strategy of making concessions to “save jobs.” Concessions are a dead end. Rather than appeasing Boeing, concessions only increase the bosses’ confidence to demand more concessions.

Machinists rallied against Boeing’s attacks throughout the dispute, despite the international leadership’s support for concessions or the massive campaign by the political establishment and the corporate media to accept the concessions. This showed the potential for a powerful resistance. The leaders could have refused to re-open the contract, which was legally binding for another two years, while developing a plan of action to powerfully transform the members’ instinctive drive to fight.

Boeing’s blackmail could have been answered with a “work-to-rule” campaign, a tactic employed by labor in the past where the existing contract is used to slow down production. This would have further back up Boeing’s enormous backlog of orders. Such a step could have put enormous pressure on Boeing, and the future of the factory could have been saved by linking such action to winning contract language outlining clear conditions for future production, with the right of the union to check any plans that potentially undermine the workers.

All-out mobilizations in support of the Boeing workers could have been organized with appeals to the wider labor movement and working class, linking the struggle at Boeing with the wider war against working people by the 1%. This is exactly what happened when the shipping conglomerate EGT tried to open up a non-union grain terminal in Washington state in 2011. The labor movement and the Occupy movement rallied support and planned a massive demonstration in solidarity with the International Longshore and Warehouse Union, helping force EGT back to the negotiating table.

But, we cannot underestimate the the ferociousness of big business. If workplace action is not enough to stop Boeing’s extortionist threats to move good jobs out of our communities, then we need a counter-threat.

Why should decisions over the economic future for thousands of workers and the whole region be left to massive, corporate behemoths like Boeing? If the 1% want to use their inordinate control over resources and jobs to devastate a whole area, then Boeing factories can be taken into public ownership. The skills of the workers and the machines can be used in the best interests of society, not the greed of a few.

Boeing workers have tremendous power. With a fighting leadership, workers at Boeing could not only defend jobs and hard-won gains – they could provide a powerful backbone to the struggle of all working people against the 1% and the crisis of their system, capitalism. That’s what’s at stake in this debate. This election is about more than getting rid of a union president that has surrendered to the blackmailing of the bosses. It’s about developing an alternative within labor to transform the IAM and the wider labor movement along fighting policies, and rebuilding a strong and powerful labor movement that can organize the fight back.

Boeing Puts Profits Before Safety: The Case for Public Ownership