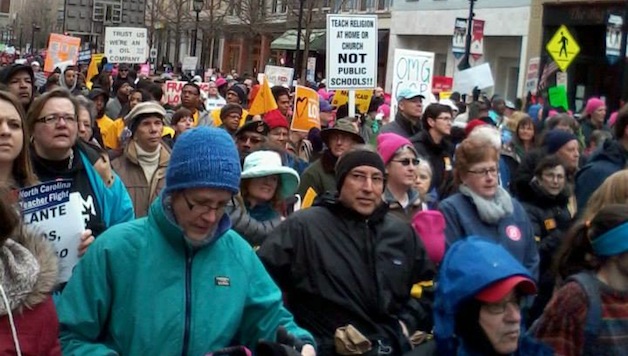 This past Saturday, tens of thousands of workers, activists and youth from across the Southeast traveled to Raleigh, North Carolina for the “Moral March” on the State Capitol. The march itself was a convergence of the annual Historic Thousands on Jones Street (HK on J) marches of the past 7 years called by the North Carolina NAACP – based on its ’14 Point Peoples Program’ and the “Moral Monday” movement of the last year.

“Moral Monday” is a movement of youth and workers, led by the NC NAACP and headed de facto by its president, Reverend William Barber that began in the spring of 2013, originally against attacks on labor rights in North Carolina.  The protests quickly grew into a much broader movement against attacks on women’s, immigrants’ and workers’ rights by the Tea Party-dominated North Carolina General Assembly (legislature) and Republican Governor Pat McCrory. These included the introduction of voter ID laws as well as cuts to unemployment, Medicaid and abortion access, among other things.

The movement earned its moniker being based on acts of civil disobedience in the State Capitol on Mondays of every week the General Assembly was in session in 2013, beginning in April. Over the course of 2013, Moral Mondays grew enormously to over 10,000 on the demonstrations and a total of 1,000+ arrested for acts of civil disobedience. Since that time, it has spread and spawned similar movements in Georgia and South Carolina.

Saturday’s rally and march was seen not just as a protest against the repressive political attacks being thrown down by the North Carolina legislature but was characterized by numerous contingents pushing causes to advance the position of workers and youth in the upper South. Most notable was the large organized force of low-wage workers from Raise Up North Carolina and Georgia calling for a $15/hr minimum wage.

Socialist Alternative mobilized from around the country – including members from Alabama, Tennessee, North Carolina and Massachusetts – to make a bold intervention in the demonstration. In contrast to conceptions of  “Southern exceptionalism” to the ideas of socialism, SA members were enthusiastically received – selling 100 newspapers in a couple hours. Also, scores of contacts signed up to get more information about socialist ideas and activism, with the seeds sown for potential new branches in both Charlotte and Raleigh, North Carolina as well as Johnson City, Tennessee.

Our success, only limited by our resources, lay in Socialist Alternative’s transitional approach to demands and political consciousness. This method, outlined most notably by Russian revolutionary leader Leon Trotsky in 1938’s “The Transitional Program,” seeks to create a bridge between the popular consciousness, or what people are thinking about in their day-to-day lives and struggles, and broader struggles and demands capable of winning the struggle of working-class people, and ultimately leading to the conclusion of the need to overturn the system of capitalism. Socialist Alternative was able to use this approach using slogans to create that bridge – such as ones surrounding the issues of low pay and fight for $15 and connecting them to broader appeals such as “Fight the Right! Build a Socialist Alternative to Capitalism.”

The “moral” movement is impressive with its direct action, diversity and spirit of ongoing struggle. However, it has the danger of being funneled into the election efforts of the Democratic Party. To withstand this pressure, a concrete alternative needs to be posed in terms of independent working-class candidates and a struggle in workplaces, streets and communities both against the assaults of the right and for a $15 an hour minimum wage.

The experience and success of Socialist Alternative members in relating the ideas of socialism to the everyday struggles of working people on the Moral March was an invaluable one for our organization and for the wider struggle of the Southern and U.S. working class. The coming social explosions, particularly around the fight for a living wage, can only be strengthened by the intervention of tried-and-true socialists able to argue for the way forward against the austerity and brutality of the ruling class in the U.S. and internationally. This is particularly acute in the U.S. South, a region wielded like a billy-club by companies such as Boeing to threaten the jobs and livelihoods of working people in other, more unionized areas of the country.  The Mass Moral March on Saturday was a start, but hard battles remain ahead, and Socialist Alternative will be there every step of the way!