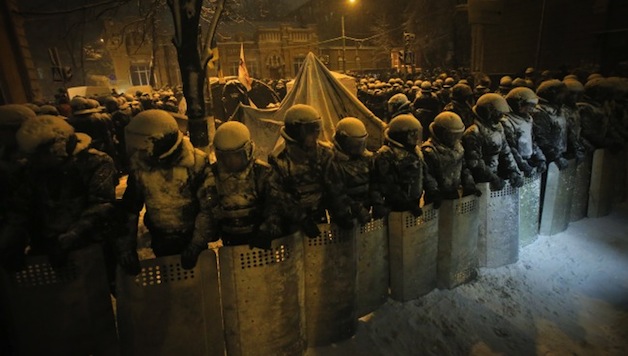 A violent stand-off between protesters and riot police continues in Kiev, with unrest spreading to other parts of Ukraine.

Crowds have stormed and occupied administrative buildings in Lviv, Lutskthe and elsewhere in the west of the country.

The protests have even spread to the east and south, which are traditionally Russian-speaking strongholds of President Viktor Yanukovich’s Party of the Regions.

Alarmed by these developments, Yanukovich made new concessions to opposition political leaders on 28 January.

He sacked his hard-line prime minister, Mykola Azarov, and the government. The president also promised to repeal draconian legislation criminalising protest and freedom of speech.

With the Yanukovich regime edging towards the brink and pro-government demonstrations taking place in Donetsk, the Crimea and other parts of the west and south – raising the spectre of a slide towards wider civil conflict – influential oligarchs publicly intervened as ‘brokers’ last weekend.

Ukraine’s richest man, Rinat Akmetov, released a statement on 27 January calling for an end to the “use of force” and for “peaceful action” to end the crisis.

Akmetov and Yanukovich’s fortunes are closely linked, with Akmetov making his billions as Yanukovich rose to power (Akmetov’s obscene wealth is also welcome in Cameron’s Britain – where he owns a £136 million luxurious apartment at One Hyde Park).

But according to the Guardian, quoting a Ukrainian political analyst: “The oligarchs keep good relations with the opposition as an insurance policy”.

It remains to be seen if Yanukovich can make enough concessions to satisfy the opposition leaders, the protesters and the oligarchs or if he will bring opposition figures into a new government.

Yanukovich also faces demands from the Russian government, which warned the Ukrainian president he faces a “creeping coup” unless he “quashed the rebellion”.

Moscow also said it will hold off buying $2 billion worth of Ukrainian government bonds until a new government is formed.

Klitschko and another opposition politician, Arseniy Yatseniuk – linked to the Fatherland Party of former prime minister Yulia Timoshenko (currently in jail) – both rejected joining a cabinet.

They said they would not abandon the protests until more demands were met. Opposition figures also rejected Yanukovich’s offer of a conditional amnesty for jailed protesters, as it is dependent on the ending of government building occupations.

Among protesters on Independence Square, in central Kiev, the main demand is for Yanukovich’s resignation and immediate elections.

This is a fate Yanukovich is likely to strongly resist, not least as he will fear a new regime would orchestrate his jailing, as he is accused of having done to Timoshenko.

At the same time, Yanukovich’s concessions were sharply criticised within his own party. The president’s subsequent temporary absence from office due to “illness” may well have been an attempt to gain tactical advantage among the intense competing pressures he faces.

Keen to push their advantage home, the opposition politicians, with the backing of the western powers, are demanding new elections and a new constitution.

Their aims are not in the interests of working people in Ukraine. They want to see the creation of a new pro-western regime that will defend the interests of the super-rich, including by enforcing austerity policies on the mass of Ukrainians.

The protests began in November last year after Yanukovich rejected a free trade and political integration ‘association agreement’ with the European Union (EU), seen as a move to eventual Ukraine membership of the EU.

Ukraine was facing bankruptcy, lumbered with a $15 billion debt. But the deal with the EU, with IMF backing, would have entailed carrying out deep austerity cuts.

Fearing an explosion of workers’ protests, instead Yanukovich forged a new deal with the Putin regime in Russia. President Putin offered $15 billion in loans and reduced energy prices.

Just like the western powers, the Putin regime is not acting in the interests of the working people of Ukraine.

While warning the EU to stay out of Ukraine’s affairs, the Russian president also stated that he expected to see Ukraine make “structural changes ” (meaning austerity cuts) to ensure the $15 billion loan is paid back to Moscow.

Twice in the last ten years the Moscow regime cruelly cut off gas supplies to Ukraine to force favourable energy deals from its smaller neighbour.

The Yanukovich-Putin deal intensified the international power struggle for influence over Ukraine, which is an important geo-strategic territory.

Putin is now pushing for Ukraine to join a customs union it has made with Belarus and Kazakhstan, as a forerunner to a ‘Eurasian Union’.

The Kremlin regards this as an important step to shoring up its regional position and to counter western imperialist influence.

The two months of mass protests saw many take to the streets of Kiev demanding an end to Yanukovich’s authoritarian rule, endemic corruption, poverty and economic stagnation.

In the absence of an independent working class political leadership, many, especially in the west of Ukraine, desperately look towards EU membership as some sort of salvation.

This is despite the economic and social misery the policies of the EU and IMF have brought upon countries like Greece, Portugal and Spain.

The brutality of the riot police, particularly the notorious Berkut militia, the killing of at least five protesters in Kiev, the video footage of police torture and humiliation of detained protesters and the regime’s planned anti-protest legislation, only inflamed wider sections of the population.

At the same time, many in the more industrialised Russian-speaking east oppose the protests, fearing the arrival of EU competition would decimate their livelihoods.

Without an organised working class alternative, the street protests were from the start dominated by reactionary, pro-capitalist opposition figures, like Klitschko, with western backing.

The protests have also seen significant influence from the far right, including fascist groups. The anti-Semitic Svoboda party, fascistic White Hammer and the ultra-nationalist Right Sector were instrumental in orchestrating street rioting and the occupation of government buildings in Kiev and elsewhere.

Since the collapse of the former Soviet Union in 1991 and the emergence of an independent Ukraine, the working class of the country has paid heavily for its lack of political representation and independent organisations.

The restoration of capitalism saw the loss of 50% of Ukraine’s national income in five years and the plummeting of workers’ living standards, while a tiny minority looted state assets and became extremely enriched. Today a handful of oligarchs own the bulk of the Ukrainian economy.

The ‘Orange Revolution’ in 2004 saw an outpouring of mass anger at the authoritarian rule of Yanukovich and economic stagnation but the Kiev protest movement was safely kept along pro-Western capitalist lines.

Yanukovich was forced from power but there was no real improvement in living standards or democratic rights under the subsequent rule of Yuschenko and Timoshenko. The resulting mass disillusionment allowed Yanukovich to return as president.

All these politicians are discredited in the eyes of most workers and youth. The same will happen with Klitschko and the other reactionary opposition leaders.

Whatever the differences between the pro-EU opposition politicians and the Yanukovich regime, they are hostile to the interests of the working class.

The most important lesson for working people from recent events, whatever their ethnic background, is the need to find their genuine political voice.

A key task is to build independent unions and a mass united workers’ party in opposition to the Yanukovich regime, the reactionary opposition forces and also their international capitalist backers.

This means a struggle for democratic rights and for fundamental social and economic change. It means taking the lead in the fight for jobs, a living wage, decent housing and a fully-funded welfare, health and education system.

It means the organised workers’ movement being in the vanguard of the movement, using the methods of class struggle, democratically organised by workers’ committees.

A powerful workers’ movement could sweep away the far right and fascists from the streets and put forward a socialist alternative to those sections of society attracted by their poisonous ideas.

Such a movement could also make a class appeal to the rank and file of the police, neutralising the forces of the state.

Instead of the current Rada (parliament), which is stuffed full of reactionary, corrupt politicians in hoc to oligarchs, an organised workers’ movement would demand the formation of a genuinely representative constituent assembly, and fight for a majority workers’ government.

With socialist policies, a workers’ government would expropriate the enormous wealth of the parasitic oligarchs and take the main sectors of the economy into public ownership, to be democratically planned by working people for working people.

Germany Takes over the Presidency of the European Union Council