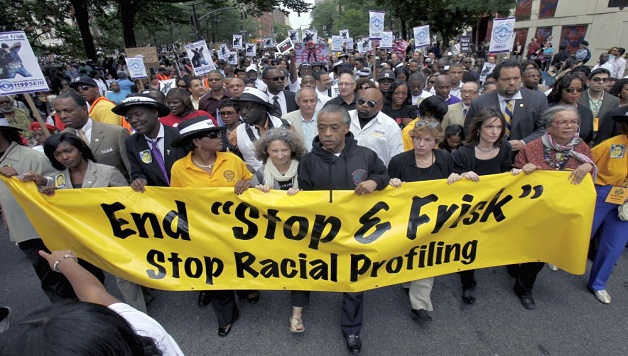 The Tale of “Stop and Frisk” in NYC

The Supreme Court’s decision in the 1968 Taylor v. Ohio case loosened the requirements for establishing “probable cause” for a police search. This decision eroded the Fourth Amendment right protecting against “unreasonable search and seizure” by extending the definition of probable cause for a legal stop to include the subjective “reasonable suspicion,” giving police officers wide latitude to determine what constitutes suspicious behavior. On this basis, the New York City Police Department (NYPD) has implemented its “Stop and Frisk” policy, devastating communities of color, terrorizing youth, and bringing unnecessary pain and suffering to the families who have become its victims.

The Record of Stop and Frisk

In New York, Stop and Frisk was originally implemented with a stated aim of taking guns off the streets and decreasing the number of victims from shooting incidents. However, the policy has failed miserably in its stated goal. As data from the New York Civil Liberties Union shows, “In 2002, there were 1,892 victims of gunfire and 97,296 stops. In 2011, there were still 1,821 victims of gunfire but a record of 685,724 stops,” (“Stop and Frisk Facts,” www.nyclu.org). Clearly, the policy isn’t working. Instead, the policy has criminalized youth in communities of color and led to more deaths at the hands of the officers who are supposed to be in communities to “serve and protect.”

Stop and Frisk began to be more aggressively used in 2003 at the same time that the process “development” (i.e., gentrification) accelerated in working-class communities of color.

In one of the few known recordings of a “routine” stop-and-frisk, taken by Harlem teen Alvin, the brutality of the policy can really be felt. While walking home from his girlfriend’s house, 18-year-old Alvin is stopped for the second time that night by three police officers. When Alvin asks why he is being stopped, an officer answers aggressively, saying, “Want me to smack you?” As the harassment continues, Alvin’s hands are placed behind his back while officers start patting him down. While holding Alvin’s hands behind him, an officer tells him, “Dude, I’m gonna break your f**king arm, then I’m gonna punch you in the f**king face” (“Stopped-and-Frisked: ‘For Being a F**king Mutt’ [Video],” www.thenation.com). This is how stops in New York are usually conducted. One NY Times analysis has found that more than 20% of these involve the use of force.

Growing public outrage at these policies led Judge Scheindlin to rule the practice unconstitutional in the Floyd v. City of New York case, which ordered an end to the use of the policy until reforms were made. This ruling was recently overturned by a panel of three judges from the Second Circuit courts following an appeal by exiting New York Mayor Bloomberg.

The anger in communities of color against the racist Stop and Frisk policy was exploited and co-opted by Democrat Bill de Blasio in his campaign for mayor. De Blasio has promised to drop the city’s legal challenge to the reforms of Stop and Frisk recommended by Judge Scheindlin.

The Architect of Stop and Frisk Returns

Mayor de Blasio was elected for his progressive and populist rhetoric, which tapped into the post-Occupy Wall Street mood and the anger built up over 12 years of the Bloomberg administration. One of his major platform points was ending Stop and Frisk.

Since his landslide victory, de Blasio’s rhetoric has begun to change. The mayor now speaks about “reforming” Stop and Frisk and implementing a “constitutional” stop-and-frisk policy. He has proposed to place an inspector general to oversee the NYPD while also increasing police resources and promising to maintain a police force of at least 34,000 officers – a number as large as some standing armies.

Now, Mayor de Blasio has chosen Benjamin Bratton as the new police commissioner – a decision that has received backlash from activists and New Yorkers. While serving as police commissioner during the Giuliani administration, Bratton actually helped to initiate Stop and Frisk in the city of New York. During Bratton’s appointment as police commissioner for the Los Angeles Police Department from 2003 to 2011, the number of stops increased from 163,000 to a record 685,000. A small group of activists, victims of NYPD violence, and their families have organized New Yorkers Against Bratton to oppose his appointment.

The Fight-Back against Stop and Frisk

We need to draw lessons from history to address the racism that is inherent to policing practices under capitalism. Racism is a necessary element of the U.S. capitalist system, a system based on amassing profits for the few. Capital’s rule can only be achieved by using the tactic of divide and conquer against the working class, poor, and communities of color. The Black Panther Party for Self-Defense challenged the system by organizing their own independent community patrols that sought to end police violence in the black community of Oakland.

Today we have groups like Cop Watch, in which Socialist Alternative members in New York are active participants. Cop Watch organizes nationally among communities of color to patrol their neighborhoods by filming police stops and informing and empowering communities by teaching them their rights while being stopped. Instead of resorting to harmful measures like Stop and Frisk, if we are truly dedicated to reducing crime in our society, the real reasons for crime need to be addressed. The working class, poor, and people of color in this country are forced to make hard decisions for survival due to poverty and lack of living-wage jobs.

A socialist program would address these issues by fighting for jobs with a living wage, a publicly owned health care system, affordable housing, free education from Pre-K to college, and community centers for recreation and job training for our youth in the inner cities. To address the issue of police violence, we need the creation of an elected, accountable civilian review board that will have the power to shut down police precincts that have a known record of police violence and corruption. This would provide an example of community control over public safety.

The only way to get our needs met is to build a movement that demands Stop and Frisk be abolished totally, as well as an end to all racial profiling. At the same time, we need to fight for a working-class alternative to the corporate policies that dominate City Hall. We need to create our own political party for the working class that will fight for our interests and not sell out to those at the top. We need to build a powerful socialist movement to dismantle the racist capitalist system.