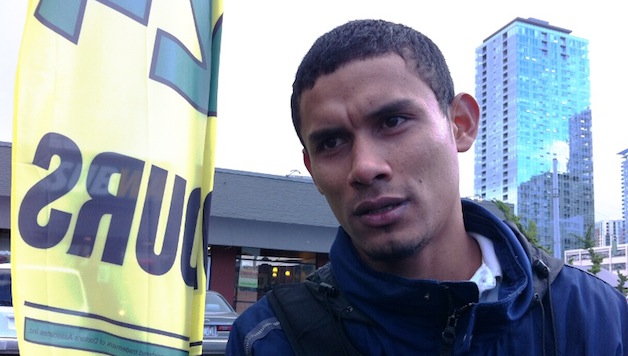 Socialist Alternative member Adam interviews a prominent fast food worker-activist Carlos Hernandez, who has become a leader in the struggle of low paid workers in Seattle.

Carlos: The working conditions are very bad. Workers are left completely unprotected. They don’t have the opportunity to live a dignified life, to pay the bills, to be able to provide for their families. The majority of workers are always paid the minimum. They aren’t paid overtime. It’s really sad. There’s a lot of wage theft. This happens in the majority of restaurants, but people don’t know it’s illegal and unfortunately people have to buy the necessities of life and they don’t have a way out.

Adam: What are the demands of fast food workers laboring in these conditions?

Carlos: One of the first things is health care, because most people don’t have it, and if they do have it it’s very expensive. So people want health care. There should be more regulation of working conditions, on the employers, in order to be sure that working conditions are okay, that workers have protection, and that they are not exploiting the worker. Workers need more protection.

One of the most popular demands is for $15 per hour. The biggest companies have the ability to pay $15, which would then give workers the capacity to improve their lives and go to school, because they wouldn’t have to work two or three jobs. We are the ones that make this industry move. We are the ones who open the restaurants, attend to the customers, clean, and make the food. But the bosses don’t care about all this. They don’t care about our wages. They just care about making money.

As long as they’re making money the people are recyclable – throw away. When someone gets sick, they’re out. We’re struggling for $15 per hour so we have more control over the industry and so there’s more protection for workers. So there’s no more wage theft. Right now less than one percent of fast food places have unions. It’s very important that we have them in the fast food industry.

Adam: How have the fast food companies responded?

Carlos: The employers are responding exactly as we expected them to. What they care about is how much money they make, their profits. They’re doing whatever they can to make this fail. They have the power of money, unfortunately. A lot of workers are afraid because they have to pay for necessities. They have families and they don’t want to lose their jobs. Intimidation is a very powerful weapon. They can shut people up. So right now they are using intimidation a lot. In my case, I have been fired twice from my job for trying to improve conditions. The first time was Chipotle and there I didn’t have so much support. The second was Subway.

As a worker I don’t like injustice. I don’t like to see people get treated poorly. I don’t want conditions at these jobs to stay the same forever. It’s not just me or the others who are working now. A lot of new workers are going to come and start working there, and it’s going to be the same. If nobody tries to change things, then nothing is going to change. Things will stay the same. Owners will become bigger and bigger millionaires on the backs of the people who are working there, on the backs of their necessity, and that’s not right. They have the ability to treat the people better and treat them with respect. But they don’t want people to try and change the conditions.

Adam: Tell us more about that.

Carlos: After I went to my first strike and started talking to other workers about their rights, they started segregating me from other workers, Spanish-speaking workers especially. I’m a good worker so it was difficult for them to fire me. They knew that if they fired me people would be all over them. So they looked for a legal way to fire me. They fired me for giving a cookie to a kid. Unfortunately, there are no regulations and they are able to do that. They were always monitoring me with the camera waiting for me to do something “bad”. At the time I felt really sad, because whenever somebody does something against injustice it always carries with it those kinds of consequences. Society teaches you to ignore injustice, because otherwise you will face consequences. And you have your family which you have to help. I am a student. I have a family in Honduras. I have to help them.

Adam: So what was your response? What actions did you take to try to recover your job or at least draw attention to this injustice?

Carlos: Just trying to speak up. Speak up about workers and make myself heard, make a change, and not give up. Because that’s what they want. They want people to stop struggling. But if we stop struggling things will stay the same. It’s important that we get organized and that we realize that we are people. It doesn’t matter where we come from, if we are legal or illegal, black or immigrant, we have to do something because if we don’t things will stay the same. We will continue to be treated like garbage, like we were worthless.

Adam: Talk about the immigrant experience in the struggle?

Carlos: They play a very important role. The majority are people who need work and are afraid of being sent back to their country. So it’s really easy to exploit them and for the employer to make them work in poor conditions, to not give them the respect they deserve, and to exploit them and their fear. They feel like they don’t have a voice and like they have to accept whatever they get. For the employer, they are like objects – cheap labor, cheap workers. So it’s easy to exploit them. There are a lot of Latinos. They’re the ones who move the fast food restaurants in this country. I’ve worked in a lot of them and I’ve had the opportunity to meet a lot of Latinos and they always work very hard, but are the ones they pay the least. They play an important role. But for the employer they’re just cheap labor. As long as they’re making money they don’t care. They can treat immigrants as they like.

Adam: How can the struggle move forward?

Carlos: It’s not so easy but it’s also not impossible. There are a lot of people putting their hearts into this struggle so things can change, not only for immigrants or Latino, but for the majority who are fathers or mothers working in this country. The goal is to win better working conditions, win a wage that allows us to provide for our family and have a more dignified life. Not every luxury in the world like some people think. It’s not like that. It’s about survival in this country. We need to survive and we can’t. We are just a step away from the streets. Our kids are just a step away from drugs. All this affects our children.

One of the goals is to improve conditions and create programs and organizations so that workers themselves can get organized. The goal is to win better wages, better conditions and let the public know what’s happening. It’s really important for the people, the communities, the churches, and the politicians to be aware of the conditions, how much they pay the workers and the exploitation that’s occurring. In that respect, I think we are succeeding, and people are becoming more and more aware of the conditions in fast food.

Another of the goals is to get organized so we can win better conditions and win $15 per hour, because they have the ability to pay that. And they always try to scare people saying that the price of the food will rise and that the economy will suffer, but the economy is already very bad, the economy is already weak and it’s for that very reason. People don’t have enough to support themselves so a lot of people depend on the government.

The majority of fast food workers depend on the government to survive, with food stamps or childcare. That’s another one of the goals, for workers to be able to survive on their own, but the companies don’t want that. They want to scare people into thinking the economy will fail or that they can’t pay, but they do have the ability to pay and the price of food won’t have to raise much maybe 5 cents or so for places like McDonalds, Subway or Wendy’s. These are places that make millions. They could pay their workers more and stop exploiting the worker. But they don’t want that. They just want to keep earning more and more thanks to the exploitation of their workers.

Adam: You’ve supported Kshama Sawant’s campaign with a lot of enthusiasm. Could you explain why?

Carlos: As a worker and student I think we need politicians who have had the same experiences and faced the same obstacles as us. Especially poor people who don’t have the resources, like minorities, there are very few people who represent us, who speak out in support of change. We need people who represent this part of the population, which is the majority. The majority in this country are poor, workers who barely survive and many are people of color. Their voice isn’t heard.

It’s really important that there are leaders and people like Kshama who want to struggle for these people and who want a change in society, who want better education, who want to create programs so people can have better education, so their parents have enough to feed their kids and so workers at a company are treated with dignity. The politicians who supposedly support workers, Democrats and Republicans, go to the pickets and rallies, but then don’t do anything when there are no longer cameras. At almost every picket I see somebody who represents Kshama and I think we need people who are aware of things like her, who want to help the poor population, those who are most needy, most likely to suffer injustice, minorities.

Adam: Thank you Carlos for talking with us. We wish the best for you and fast food workers in their struggle.