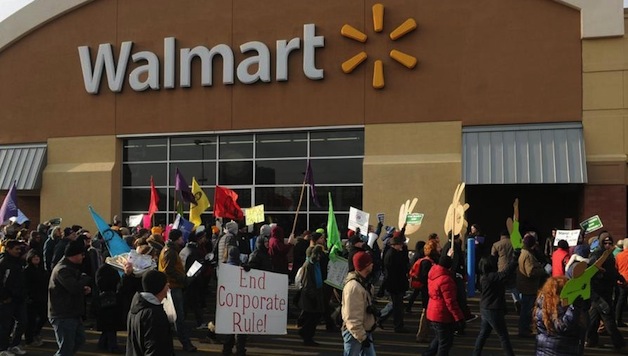 Low-wage workers, from fast food to retail, have protested, picketed, and gone on strike multiple times this year to demand higher wages and rights on the job. As we approach the holiday shopping season, there is an opportunity to build the movement of low-wage workers on “Black Friday.”

Dubbed “the busiest shopping day of the year,” Black Friday is the culmination of capitalistic voyeurism, resulting in near riots among consumers as they scramble to purchase cheaply made imported goods. Meanwhile, employees are forced to work longer hours in hectic conditions at wages that make it impossible to support themselves. Additionally, conglomerates such as Walmart engage in shady scheduling practices that result in an estimated one-third of its 1.2 million U.S. employees unable to access health benefits or earn a living wage.

Though Black Friday sales entice shoppers with outrageous savings, the cost of operating retail stores like Walmart falls heavily on taxpayers. Working in the second-largest employer in the country, the average Walmart associate earns $8.86 an hour, with an average annual salary of $17,841. Lack of benefits, sick leave, and a sufficient salary force many employees to rely on public assistance to ensure they will have access to basic necessities such as food, shelter, and health care. Recent research has found that the average Walmart “associate” receives $5,000 in public aid annually. This amounts to about $1 million public dollars being allotted per store. Meanwhile, Walmart rakes in profits projected at $15 billion dollars.

Fast-food corporations such as McDonald’s engage in similar exploitative practices. A study conducted at UC Berkeley found that more than half of low-wage workers in the fast-food industry rely on some form of public assistance, amounting to $7 billion dollars in aid. McDonalds alone is estimated to cost taxpayers 1.2 billion. Like Walmart, profits in the fast food industry reach into the billions, while forcing the public to foot the bill for their irresponsible and reprehensible business conduct. While public assistance is an important and necessary part of organized society, it is ridiculous that some of the largest employers in the country force their workers to depend on social programs so they can eat and pay their rent.

The demand for a $15 minimum wage is a direct result of companies like McDonald’s and Walmart hoarding profits while ignoring the needs of its workers. Fast-food workers have organized in major cities across the country, participating in one-day strikes and walkouts. City council campaigns by Socialist Alternative members have embraced the struggle for a living wage as part of their political platform, insisting that corporations take responsibility for their employees.

In 2012, 400 Walmart workers walked off the job in the midst of the Black Friday chaos. Despite the anti-union policies of the global conglomerate, employees have managed to organize another Black Friday strike, scheduled for November 29. This is an important opportunity to engage with a massive workforce that could potentially aid in propelling the $15 minimum wage into reality.

While the importance and necessity of one-day strikes should not be overlooked, it is essential to expand the movement’s approach. Citizens of SeaTac, WA are voting on Proposition 1 in their upcoming election, hopefully leading to a citywide raise with a $15 minimum wage. In nearby Seattle, Socialist Alternative city council candidate Kshama Sawant is demanding an implementation of a similar $15-an-hour initiative. Furthermore, the right to organize and form unions without retaliation must be fought for. It is through these types of efforts that the movement will proceed effectively.

As Black Friday approaches, consider which side of the crowd you want to be on. Will you join the throng of eager shoppers or stand in solidarity with the millions of underpaid workers in the United States? Please be sure to check in at socialistalternative.org for more details about Black Friday demonstrations.

Socialism: How Would a Planned Economy Work?