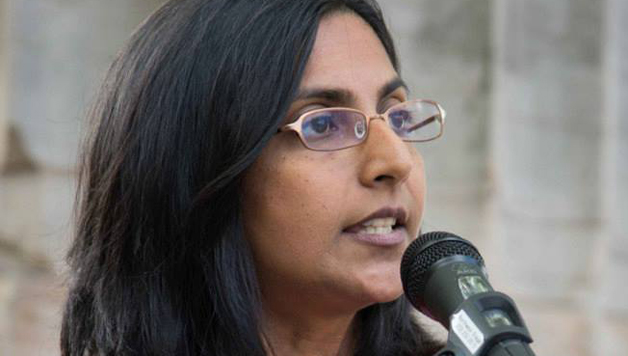 As Socialist Alternative goes to print, Kshama Sawant is set to make history, becoming the first open socialist elected to a major city council in many decades. This likely victory will send shock waves through both the establishment and the left by showing how much of an impact socialist ideas can make. While Sawant is at present in the lead, and the trend is in her favor, there are thousands of votes still to count. There could also be a recount or court battles by the Seattle establishment to dispute our dramatic success. Please follow votesawant.org and socialistalterantive.org for updates. The article below describes how the campaign made this all possible.

In the August primary election for Seattle City Council, Socialist Alternative candidate Kshama Sawant won a stunning 35% of the vote in a three-way race against two Democratic Party candidates. This was the best showing for a socialist in decades, and our campaign picked up tremendous momentum as we entered the final stretch of the general election. The final weekend of the election season, we held “100 Rallies for Sawant,” supported by a growing coalition of labor activists, Greens, immigrant community leaders, and socialists.

Kshama Sawant’s campaign translated a socialist program to the immediate pressing concerns of Seattle workers and youth. We put forward three main demands and connected them to the need to build a working-class political alternative while holding our socialist banner high. The three key demands were a $15 an hour minimum wage, a rent control ordinance to make housing affordable, and a tax on millionaires to fund transit, education, and other public services. This message gained a tremendous echo.

Our demands resonated so well that we completely shifted the debate. “The election isn’t for 10 days,” wrote Seattle Times columnist Danny Westneat in late October, “but we can already declare the big winner in Seattle. It’s the socialist. . .[W]hat’s most notable about Seattle politics this year is that nearly [Sawant’s] entire agenda has, over the course of the campaign, been embraced by both candidates for mayor,” (10/26/2013).

Both mayoral candidates vaguely said they support a $15/hour minimum wage. Other parts of our platform, like rent control and taxing the super-rich to fund mass transit and education, have been the continual focus of debates in all the city races. In August, the Seattle Times dismissed the Sawant campaign as “too hard left” for Seattle. But now they acknowledge the resounding impact of our campaign!

In October, Sawant was featured twice on the front cover of Seattle’s second-largest newspaper. Our active volunteer base surged to more than 300 people, with dozens of high-schoolers and immigrant workers getting involved. Six unions have endorsed us, and Seattle Weekly labeled Sawant as “Seattle’s Best Politician of 2013.”

Support came from musicians such as Tom Morello from Rage Against the Machine and Serj Tarkian, formerly of System of a Down. The local hip-hop community rallied around Sawant with a successful fundraiser with the best-known local performers participating. Obafemi Martens, a local and Nigerian soccer star, prominently endorsed the campaign. The Seattle Somali community as well as disaffected basketball fans were also campaign supporters.

Seattle has been controlled by Democrats for decades, and there was no Republican challenger in this race. Without any of the pressures of “lesser-evilism,” this openly socialist campaign has become a pole of attraction for many people disillusioned with the Democratic Party.

Cheryl Bersch, a lifelong activist and a volunteer with the campaign, shared this message with us when she joined our organization:

“I’ve been a Democrat and a member of other activist groups such as the National Organization for Women for 47 years. Paid my dues in many, many protests, letter-writing to representatives, and money,money, money only to watch the Democratic Party move further and further to the right. I have recently found the answer: it’s the system itself. The problem is Capitalism.”

Divisions among the Democrats

The real opening for socialist politics is exemplified by the way our campaign has strained ties between long-time allies and the Democratic Party. For example, the county-wide labor council, which has consistently endorsed our opponent, voted 28-21 in favor of a dual endorsement for Sawant.

Unfortunately, this did not reach the two-thirds majority needed for an official endorsement. Dozens of top labor and environmental leaders have told us privately that they are supporting Sawant even though the organizations they lead have endorsed our opponent.

Groups like Labor for Kshama Sawant and Small Business for Kshama Sawant worked hard to break the unconditional support that the Democratic Party often receives from these constituents. But the most striking example of strained relationships – and political confusion – is the formation of Democrats for Sawant. We accept the support of Democratic Party voters and activists, but we are clear about our socialist ideas and the need for independent working-class politics while we refuse to take a single dime in corporate donations. This patient approach combined with a positive alternative can effectively break the base of the Democrats away from the party’s corporate masters.

We have popularized socialist ideas, further exposed the Democrats as beholden to big business, helped build local movements from below, and demonstrated the huge potential for independent politics in local races. We hope this victory inspires others to run independent left challenges all across the country in 2014 and 2015, as an important step toward the formation of a new, genuine political alternative for the millions, not the millionaires.