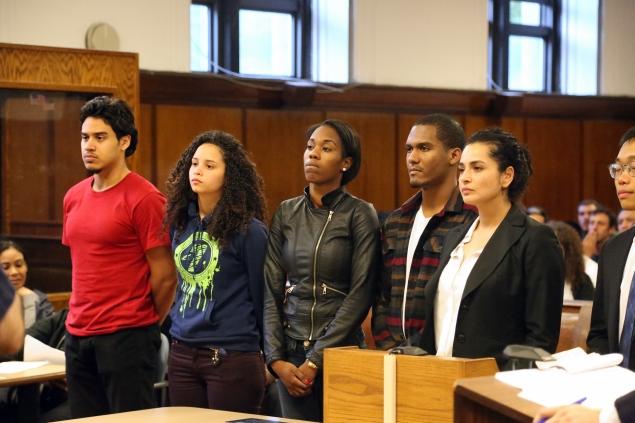 “We live in an era in which there is near-zero tolerance for democratic protest and infinite tolerance for bankers and government embezzlers which affect the lives of millions.” – Professor Henry Giroux

On Tuesday, September 17, at a star-studded fundraiser that included billionaire Mayor Michael Bloomberg and former CIA director and ex-General David Petraeus, the democratic rights of assembly and free speech for City University of New York (CUNY) students and activists were brutally attacked by police as they peacefully demonstrated outside a special gala event for the Petraeus.[http://www.youtube.com/watch?v=Q4cbtknsJu0]

The Militarization of CUNY

Ex-General Petraeus’ military career spans over 30 years, and his role as former commander of the coalition forces in the Afghanistan and Iraq Wars, as well as his connection with the drone program, has cemented his legacy as a “war criminal.” The war and occupation in Afghanistan and Iraq have led to the misery and death of thousands of workers, youth and families in the name of oil, and to the re-asserting of the dominance of US imperialism in the Middle East.

The appointment of Petraeus by CUNY to teach a semester at Macaulay Honors College has advanced the fossil- fuel industry agenda in CUNY. The title of Petraeus’ class is: “The Coming North American Decade(s)?” It will highlight pro-fracking research, papers from entities like the industry-funded National Economic Research Associates (NERA), and former Massachusetts Institute of Technology (MIT) research professor Ernest Moniz who today heads the U.S Department of Energy (DOE) study titled: “The Future of Natural Gas.”

Petraeus’ appointment further demonstrates the increased militarization of CUNY. This is shown by the intervention of Mayor Bloomberg’s private army, the NYPD, on CUNY campuses and the reintroduction of Reserve Officer Training Corps (ROTC) on a number of campuses like York, Lehman, City College, Medgar Evers, and College of Staten Island. These colleges reside in communities that are predominantly working class, poor, and with people of color.

This is an insidious way to implement a poverty draft. Many CUNY students are drowning under mountains of debt, with limited Pell grants awarded, yearly increases in tuition, and the predominance of the low-wage service industry job market. As the promise of military benefits entice students to join the military, we must say no to the militarization of CUNY and ROTC and hands off our youth and students.

“This was completely unprovoked, as demonstrators made clear that they were there to defend our university in a peaceful protest.”- City College student, Yexenia Vanegas

The Ad-Hoc Committee against the Militarization of CUNY consists of a number of left organizations and even student groups like Students without Borders at Queens College and the Internationalist Group. The Committee is centered on these key demands: 1)”CUNY Must Not Be a War College” and 2) “War Criminal Petraeus, ROTC, Military Contracts, and Military Recruiters Out of CUNY.”

On September 9, 40 to 60 students, activists, and professors had protested Petraeus’ first day of classes. The protest’s highlight was shown on YouTube video (http://www.youtube.com/watch?v=geU2S8ve1y8), which resulted in subsequent news coverage showing Petraeus walking by himself on the streets of Upper Manhattan as CUNY student activists serenade Petraeus with chants of “War Criminal.” The committee then prepared to protest an upcoming special gala event for Petraeus who originally was to be paid $200,000 for his semester at CUNY. His salary was met with so much widespread outrage that CUNY reduced it to one dollar.

The brutal and unprovoked attack on the CUNY students and activists on September 17 was meant to answer for the protest on September 9 and give a warning message to other CUNY students who might join future protests. If you organize and speak out, you will receive batons and brute force. In the wake of the police violence on September 17, CUNY students (Luis Henriquez, 25, Jose Disla, 25, Denise Ford, 24, Angelica Hernandez, 18, and Rafael Pena, 24) were charged with obstruction of governmental administration, riot, resisting arrest, and disorderly conduct, enduring 28 hours in a cell after being already beaten and bruised.

The ruling elite has shown again that they will answer dissent and organizing with surveillance, violent force and prison, as evident through the programs of stop and frisk and their national coordinated attacks two years ago on Occupy protesters.

With the recent statement by the Ad-Hoc Committee and a signed resolution supported by student-professor unions like the UC Student-Workers Union Local 2865 – which represents over 12,000 academic professors, students and union officials across the United States – we must organize and broaden out this campaign against the militarization of CUNY and the arrival of Petraeus.

The students and workers of CUNY have a rich history of organizing, protesting, student occupation, and social struggles. The ROTC was ousted from CUNY in 1971 due to mass student mobilization and protests. CUNY is attempting to become an elite institution by pushing out working class, poor, and people of color. The student activists and overall left groups on our campuses are much smaller than in previous years, which is why we need to reach out to workers, community organizations, and city unions. The support of unions like the Professional Staff Congress is a good first step. Organizing to defend the interests of students and workers is needed more than ever with daily protests throughout the CUNY system.

In order to defeat the agenda of big business, we must organize among the wider student body on every CUNY campus. We must link up with the struggles of low-wage workers for a 15 dollar minimum wage and with environmental activists organizing against fracking. We must use the tactics of teach-ins, non-violent civil disobedience, sit-ins, daily pickets, and strikes.

The Ad-Hoc Committee has done great work to expose the ROTC and Petraeus in CUNY. October 17 will be the first court hearing for the CUNY 6. We must aim to pack the courtroom to give them our full support. The police attack against students on September 17 demands that we accelerate our organizing, outreach and strategy to end the “Militarization of CUNY” and drop the charges of the CUNY 6!

Socialist Alternative members and supporters in New York are putting forward the following program to fight back against the militarization of CUNY: