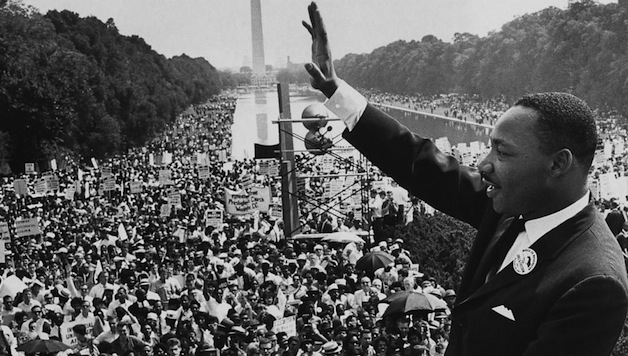 Socialist Alternative members will be handing out hundreds of these leaflets at the rally tomorrow to commemorate the 50th Anniversary of the “March on Washington” led by Dr. Martin Luther King, Jr.

This August 28 marks the 50th anniversary of the historic March on Washington for jobs and freedom.

This commemoration is taking place in a period of unprecedented attacks on democratic and social rights fought for and won by militant, mass social struggles of working people, youth – and particularly black workers and youth. These can be seen most clearly in the recent acquittal of George Zimmerman in the killing of 17-year old Trayvon Martin, the racial profiling policies like ‘Stop and Frisk’ and police violence in working-class and people-of-color communities. There are six million people under “correctional supervision” in the U.S. today and half of the 2.3 million prisoners are black and brown. The recent Supreme Court decision effectively gutted the enforcement of clause section 4 and 5 of the Voting Right act of 1965 which – at least legally – safeguarded against voter discrimination and voter suppression particularly in the South. The establishment of voter I.D. cards and more restrictive voting rules will eliminate poor, immigrants and people of color from the voting rolls, further strengthening the power of corporate power over politics.

Black workers and youth face a bleak reality fifty years after the march on Washington as seen in healthcare disparity, housing and education segregation. The economic crisis of 2007-08 resulted in the “greatest loss of wealth for people of color in modern US history,” according to the report “Foreclosed: State of the Dream 2008.” According to the Bureau of Labor Statistics, the official national unemployment rate stands at 7.6%, while for African Americans it is 15% – much higher if those who work part time or have dropped out of the labor force are counted. Today, “in the midst of a vast ocean of material prosperity,” according to Bread For the World, “14.5 percent of U.S. households – nearly 49 million Americans, including 16.2 million children – struggle to put food on the table” and “more than one in five children is at risk of hunger. Among African-Americans and Latinos, nearly one in three children is at risk of hunger.” The capitalist system has failed black America.

The First Black CEO of Empire

African-American scholar and author Cornel West, described President Barack Obama as a “black mascot of Wall Street oligarchs” and a “puppet of corporate plutocrat.” Commenting on the continuation of the war policies of empire and the use of drones across the globe he said, “Obama is the head of the American killing machine and is proud of it.” West’s characterization speaks volumes about the interests that the first black president supports, defends and advances. President Obama has expanded and accelerated the Wall Street agenda proposing devastating cuts to Social Security, nationwide budget cuts to vital social services, vicious attacks on public education, reduction of food stamps and automatic spending cuts this past March, which have increased the misery of millions of unemployed, poor and people of color. Instead of using the spirit of struggle and resistance of Dr. King to launch a new movement against injustice, the organizers of the march today are attempting to contain and smother struggles against racial and class oppression. This can be seen most clearly in inviting President Obama to give “the keynote” address on August 28. In reality, Obama and the corporatized black misleaders are the exact opposite of the powerful radical history of black freedom movement and Dr. King’s legacy.

This is why Malcolm X once said, “You can’t have capitalism without racism.” Racism is a divide-and conquer strategy by the ruling elite to cut across workingclass unity and solidarity turning our rage against one another instead of the real criminals: Wall Street, corporate politicians like President Obama and the capitalist ruling elite as a whole. If we want to fight racism we have to take on the whole system – capitalism! We must draw our inspiration from the tremendous “Moral Mondays” movement in North Carolina, the low wage workers’ campaigns around the country for a living wage, the struggle of the teachers across the country, the Dream Defenders and the protest rallies after the Trayvon Martin verdict. We must see our struggle as apart of the international working class struggles from Brazil to Portugal, Greece, Tunisia and South Africa. The black freedom movement tore down the walls of legal segregation in the ’50s and ’60s. The time is now to construct a new multi-ethnic mass movement that will fight back against racial and class oppression across the country. Our rallying cry must be today ‘Enough Is Enough.’ We have to rise up for justice and equality with the aim of dismantling the entire system of American capitalism and racism, and fighting for a democratic socialist future based on solidarity, economic justice and freedom. As Dr. King said, “We are dealing with class issues. Something is wrong with capitalism… Maybe America must move towards democratic socialism.” We also must end the abusive relationship with the corporate two-party system of both Democrats and Republicans. As Malcolm X stated, “You put the Democrats first and they put you last.” The running of independent working class candidates with the aim to build a party of the working class can begin to break the dominance of the two-party system and provide an alternative to the agenda of Wall Street. We need a fighting program to address the main challenges we face today: