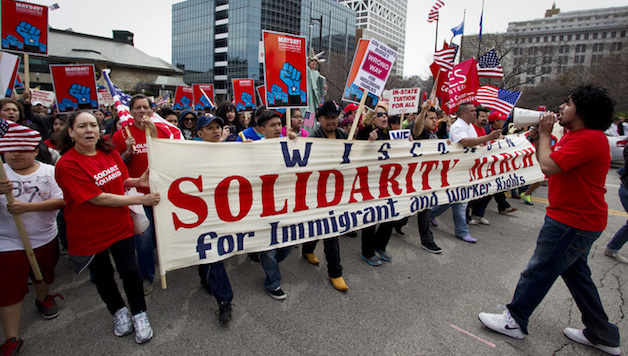 Last year, working people produced historic profits for corporations and their investors while being compensated with stagnating wages and gutted benefit packages, if they were awarded at all (Economic Policy Institute, 3/2013).

Meanwhile, immigrant workers toil for even less and are subject to wage theft and debt servitude. Plus, they aren’t covered by even basic L&I insurance (Southern Poverty Law Center, 2/2013). Big business and their politicians stave off the threat of a massive movement of working people by dividing the working class, sowing lies about immigrants. Working people from every country share common interests: good wages, healthy food, safe shelter, accessible health care, and quality education for children. Corporations, with their thirst for profits, stand squarely against those interests. So working people, wherever they live, whether they have papers or not, must unite and fight shoulder-to-shoulder if, as workers, we hope to reap the fruits of our labor.

How is it that the minority, the 1%, can slash wages, lay off workers, and demand austerity without provoking a revolt of the millions that suffer from their system? One tactic they use is making us fight over crumbs. They whisper in the ears of native-born workers that immigrants “steal jobs and use social services they don’t pay for,” aiming to pit workers against one another. But let’s look at the numbers. The unemployment rate in the United States is hovering right around 7% (Bureau of Labor Statistics, 6/2013) and there are about 11.1 million undocumented immigrants living here (Pew Research Center, 4/2013). Yet in 2007, unemployment was at a 10-year low of 4% and, at the same time, there was a spike in the number of undocumented immigrants, at 12 million (Bureau of Labor Statistics, 6/2013). More immigrants does not mean more unemployment. In fact, a Center for American Progress study found that granting citizenship to those 11.1 million undocumented immigrants would create an estimated 159,000 jobs (3/2013).

Another common lie is that immigrants are a drain on the system and that they don’t pay taxes. However, a recent study by Harvard Medical School found that payroll taxes deducted from the paychecks of immigrants in 2009 alone generated a $13.8 billion surplus for Medicare (Health Affairs, 6/2013). The study’s authors point out that, as Medicare is currently funded, the surplus from taxes paid into the system by immigrants is a key factor in sustaining health insurance for the elderly in the United States (Health Affairs, 6/2013). Not only that, the IRS reports undocumented immigrants paid close to $50 billion in federal taxes from 1996 to 2003, yet federal law makes them ineligible for the services their tax dollars fund, like Medicaid.

Immigrants are often at the forefront of struggle. The early days of the labor movement in the United States were greatly influenced by immigrants pouring into the unions, bringing the fighting traditions from the labor movements in their native countries. Since then, there has been a long history of immigrants organizing and demanding change, from the Braceros in the Pacific Northwest to the East LA high school walkouts of the ’60s, from the Justice for Janitors campaign to the nationwide immigrant boycott and strike in 2006.

This proud history is despite the risk of deportation faced by undocumented immigrants who stand up to the bosses. And that threat is only growing: Obama has deported more immigrants than at any other time in history (Forbes, 7/2012). And it has since come out that, under his administration, Immigration and Customs Enforcement (ICE) is setting targeted “quotas” for deportations (colorlines.org, 2/2013). Imagine just how bold these workers could be in fighting against the bosses and big business if they were all awarded papers!

For the last 40 years, wages in the United States have remained below a peak reached in 1972, despite a doubling in productivity over that same period (whitehouse.gov). We’re working harder than ever, and for what? Pensions slashed, health insurance premiums jacked up, and unions busted. All so corporations and the ultra-wealthy can amass fortunes the size of which have never been seen in the course of history.

Don’t be fooled, corporations like immigration. When it’s combined with the constant threat of deportation, they have a never-ending source of cheap, submissive labor from which to profit. But it’s more than that: They use immigrants to threaten native-born workers, as well. They say, “Not willing to accept our terms? There’s plenty willing to work for less.” They use the immigrant workforce to drive down wages and degrade the living standards of all working people. This is why native-born workers must also demand full rights for immigrants; their fight is our fight.

History has shown that working people and the poor only win gains when they unite to fight. That’s how the eight-hour workday, the weekend, a minimum wage, child labor laws, and pensions were won. ICE aims to terrorize immigrant communities to keep undocumented immigrants in fear and limit their ability to organize and fight back.

Right now, the strongest way to fight for better wages and working conditions is for workers, including unions, to oppose second-class status, demanding full rights for immigrants. The politicians propose militarized borders and guest worker programs. Instead, we must organize immigrants and undocumented workers into the unions and, together, wage struggles for better jobs, pensions, and free universal health care for all! Until workers replace capitalism, we can expect the corporations and corporate politicians will continue to drive down our working and living conditions in the pursuit of profit. Brothers and sisters, it’s time we unite, immigrant and native-born worker, to oppose the corporate agenda and their race to the bottom!