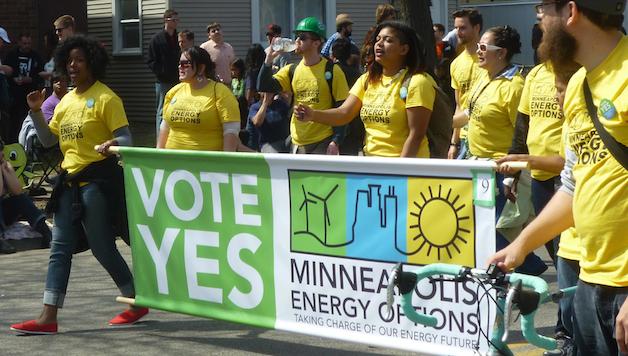 As the national debate over climate change and the role of the energy industry rages, Minneapolis voters may be asked this November to decide whether to empower the city to take their energy providers into public ownership. A ballot initiative to allow the City Council to municipalize the for-profit electricity and natural gas utilities – Xcel and Centerpoint – is setting the stage for a major showdown between the energy industry and a coalition of climate activists and community groups. Socialist Alternative and our Minneapolis City Council candidate, Ty Moore, will be at the forefront of this nationally significant debate.

As energy companies are ramping up fossil fuel exploration and turning to ever-dirtier means of extraction, the question of what to do about climate change looms large. All hope of mitigating the climate change crisis rests on rapidly transitioning our energy infrastructure away from fossil fuels and replacing them with renewable sources like solar, wind, and geothermal power. Yet energy companies, fixated on the enormous profits in oil, coal, and gas, refuse to make the switch and are even disinvesting from renewables. A few years ago, Shell sold off nearly its entire solar business (Chris Williams, Ecology and Socialism 93), and this year BP said it was selling off its wind business (Climate Connections, 4/5/13), citing lack of profitability as the reason.

As Bill McKibben pointed out in a recent article for Rolling Stone, energy corporations now hold in proven reserves five times the amount of fossil fuels it would take to send climate change into an irreversible spiral of truly catastrophic dimensions. These reserves are the assets on which these companies’ wealth is based, and they will not be convinced to simply write them off, no matter how dire the consequences of extracting and burning them. The only way to force the energy industry to shift their vast resources toward huge investments in renewable energy infrastructure is to take them into public ownership and run them to meet public need rather than to maximize profits.

This coming year, Minneapolis’ 20-year contracts with Xcel and Centerpoint – our electricity and natural gas providers, respectively – are up for review. A new group called Minneapolis Energy Options (MEO) is building a coalition of environmental and community organizations to push the city government to consider municipalization, and Socialist Alternative’s candidate for City Council in Minneapolis, Ty Moore, is making public ownership of the city’s energy a central demand. With this as a first step, our campaign is calling for a clear goal and workable plan to move rapidly to 100% renewables for Minneapolis electricity and heating.

With the help of Socialist Alternative and other community groups’ efforts to build public support, MEO appears set to succeed in convincing Minneapolis City Council to approve the ballot initiative which, if passed by voters in November, would authorize the city to municipalize. We expect a vigorous “Vote No” counter-campaign financed by Xcel and Centerpoint. In 2011, when Boulder, Colorado voters were given the choice to municipalize, Xcel spent a million dollars on advertising and canvassers, nearly defeating the measure (Utne Reader, 9/12). A massive public education and get-out-the-vote campaign is required to ensure the measure passes.

Building an effective campaign in Minneapolis means linking the struggle around utilities to the crucial question of jobs. Historically, the environmental movement has had a hard time connecting with working-class people because of energy industry propaganda – loudly echoed in the corporate media – that environmental reforms will mean eliminating skilled, high-paying jobs. This is a false choice presented by the ruling class to undermine the movement. In reality, the demand for a major green jobs program to rapidly build, operate, and maintain a renewable energy infrastructure could mean full employment for everyone.

Socialist Alternative and the Ty Moore campaign are calling for the City of Minneapolis to initiate a major green energy jobs program to build windmills, solar parks, and other renewable electricity sources, and to retrofit existing houses for energy efficiency and geothermal heat. Such a program can be linked to other demands such as raising the minimum wage to $15 per hour and closing the racial jobs gap. The Minneapolis-St. Paul Metro Area has one of the worst racial employment gaps in the country, with figures for 2011 showing 18% unemployment for African Americans, more than three times the number for whites (MPR News, 6/10/13).

Our demands point to a much larger picture than simply municipalizing utilities in one city. Working-class people are struggling across the nation, and climate change requires immediate emergency responses on a global scale. The technology to implement a transition to 100% renewable energy exists (Scientific American, 4/15/13), and the money to do it is there. Currently, Xcel reaps $450 million in revenue annually from Minneapolis alone. Taking control of our utilities would divert that money back into our local economy and make it available for a transition to renewables.

Since corporate politicians prevent city governments from implementing most forms of progressive taxation, our program would require an infusion of state money, provided by raising taxes on the super-rich. Nationally and globally, there are trillions of dollars in corporate coffers sitting idle, due to a lack of profitable areas of investment. But putting this money to use for the good of all will require taking public ownership of Wall Street and big business, meaning a shift to a socialist, democratically planned economy.

Taking our utilities into public ownership in Minneapolis is only a beginning. Nationalizing the energy industry is a necessary step toward any hope of a sustainable future on Earth. Ultimately, only nationalizing all major industries under democratic workers’ control will put an end to the environmental degradation and human exploitation created by capitalism. Challenging the power of big business will require a movement that dwarfs, in size and scope, all of the vital struggles in human history. Let’s make the fight to take Minneapolis’ utilities under public control into a model for the future and a flashpoint for the coming global revolution.