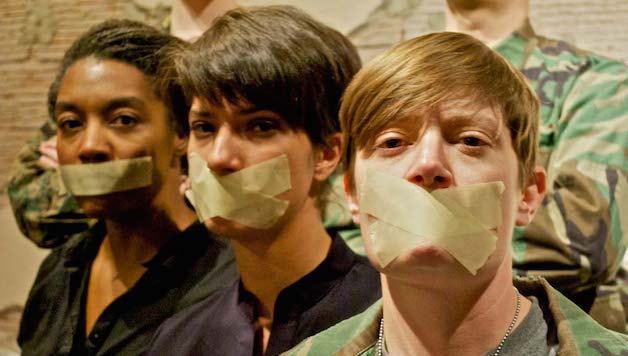 In the United States military, fighting wars abroad is the soldier’s primary duty. However, recent scandals within the military have exposed a different type of war in which service men have been increasingly engaging: the war on women.

A 2011 report revealed that women in the military are more likely to be sexually assaulted by a fellow soldier than they are to be killed in combat. In fact, the Pentagon released an annual report revealing a 35% increase in sexual assault incidents over a two-year period. According to this report, there were approximately 26,000 reports of sexual assault in 2012, compared to 19,300 in 2010, (NY Times, 5/8/2013). However, despite this shocking number of incidents, in the last yearly reporting period only 1,108 troops filed for an investigation, and of those cases a mere 575 were processed. To make matters worse, only 96 of the cases processed went to court-martial (npr.org, 3/21/2013).

Recent reports of violence against women in the military include the ongoing investigation of 30 Air Force instructors for assaults on trainees at Lackland Air Force Base in Texas (Huffington Post, 5/6/2013). As though these statistics aren’t horrifying enough, it was recently revealed that the U.S. military officer charged with overseeing sexual assault prevention at Fort Hood in Texas is currently himself under investigation for sexual assault. The allegations levied against him include the maltreatment of subordinates, sexually assaulting two subordinate service women, and forcing at least one service woman into prostitution. The officer’s name has yet to be released, and charges have yet to be filed (rt.com, 5/15/2013). This announcement came shortly after Lt. Col. Jeffrey Krusinki, the officer in charge of the Air Force’s sexual abuse prevention program, was arrested for groping a woman while intoxicated.

History of Abuse and Rape Apologists

Unfortunately, violence against women in the military is not a recent phenomenon. In 1991, more than 100 U.S. Navy and U.S. Marine Corps officers allegedly sexually assaulted at least 83 women during the course of a four-day Tailhook Association Symposium in Las Vegas. As a result of these allegations, 300 service men were disciplined or denied promotion, much to the chagrin of conservative leaders who believed that the reaction to the scandal was politically motivated and overly harsh. John Lehman, Navy Secretary during the Reagan Administration, noted that, “Those attributes of naval aviators – willingness to take intelligent calculated risks, self-confidence, even a certain swagger – that are invaluable in war time are the very ones that make them particularly vulnerable in today’s zero-tolerance Navy,” (Washington Times, 9/18/2011). While this is a clear example of rape apologetics at its finest, the very nature of the military, with its emphasis not only on “swagger” but also on power and domination, sets the stage for collateral damage in the form violence against women.

Despite the fact that the U.S. government and mainstream media use misleading statistics and fear-mongering to perpetuate the notion that the military exists to protect U.S. citizens from various forms of attack, this is not its primary function. The military’s primary function is to protect the economic interests of the 1% through intimidation and violence, both at home and abroad. Therefore, the attitude, mindset, and behavior that prevail in the military are not born out of a culture of defense and security but are products of a culture based on power and domination. Rape culture is not so different. Numerous studies have shown that rape is rarely about sexual gratification and more about male dominance, power, and control.

Men are not naturally prone to committing acts of violence against women. Rape and sexual assault are, instead, byproducts of a culture that promotes male dominance on a systemic level. The military is not struggling with this crisis because men are incapable of working in close proximity to women without being driven to sexually assault them. Military culture includes unquestioning obedience, strict hierarchy, macho posturing, and, of course, a glorification of violence and dehumanization of “the enemy.” The military is struggling with this crisis because it is the most concentrated manifestation of capitalist sexism. This dangerous culture within the military has only been exacerbated by the military’s complete and utter failure to justly deal with reports and allegations of sexual assault.

The aforementioned statistics from the last yearly reporting period revealed that only 96 of the 1,108 reported sexual assault cases in the military were brought to court-martial, and the unjust way in which the military handles these reports is largely at fault. Service members must report incidents of assault to a commanding officer before any further steps can be taken. These commanding officers frequently dissuade the accuser from taking further steps in order to protect the careers of service men who commit assault. Several victims of sexual assault in the military report that their own military careers were threatened or ended.

In some cases, these victims are ordered to undergo mental health evaluations and then discharged from the military with a “personality disorder” diagnosis (Business Insider, 5/25/2013). Even if the report makes it past the commanding officer, it must be evaluated by a military body before it will ever be brought to a civilian court. Often the military internally “disciplines” perpetrators rather than bringing the case before a civilian court.

Obviously this is not justice, which serves to partly explain why a paltry 1,108 troops filed official reports in the last reporting period while an estimated 26,000 service members were sexually assaulted in the same period. This trend, again, is an extreme reflection of a broader systemic problem, a problem for which present military officials and lawmakers representing the parties of big business have been able to provide few viable solutions.

Rape culture is firmly embedded in our present system. The top-down, authoritarian structure of the military, which works to divide service men and women to maintain control and achieve its aims, mirrors the broader capitalist system under which we live. Under capitalism, the 1% actively seek to divide working men and women along the lines of race, ethnicity, gender, and sexual orientation to maintain power. As a result, it is estimated that one in five women in the U.S. have been raped or sexually assaulted (NY Times, 12/15/2011). Less than half of these victims ever report the incident, and of those cases reported only 3% result in the perpetrator spending even a single day in prison (rainn.org). Through the lens of rape culture, women are often blamed for provoking sexual assault and rape, whether it’s due to clothing choice, the consumption of drugs or alcohol, or just not being careful enough in certain settings.

In order to end sexual assault in the military, not only should perpetrators of sexual assault and rape be tried in civilian courts, but working men and women should build a broader movement against rape culture, which has informed the military’s attitude towards, and response to, violence against women. In order to fight back against this culture of power and domination firmly entrenched in the military, we should demand an end to all imperialist wars and call for the immediate return of all troops deployed to fight in these wars. In addition to this, the $682 billion (statistica.com) allocated to military spending each year should be slashed, and these funds should be reallocated to pay for quality health care services, child care, and education for all working women and men.

Further, working people need to fight for economic equality for women, who still only make 81 cents for every dollar men make. Only when working women and men join together to promote economic equality and better living standards for all oppressed people, including women, will we see an end to rape culture and the victimization of not only women in the military, but women everywhere.