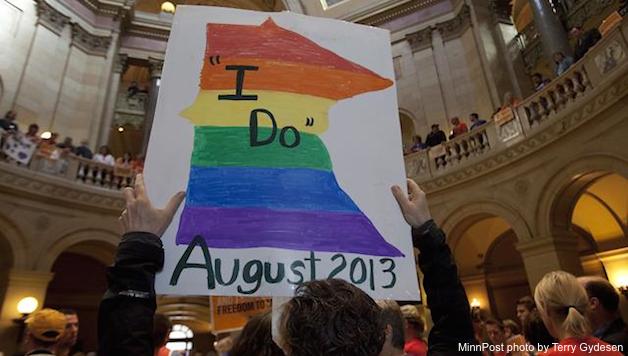 Originally posted on TyMoore.org on May 13th, 2013

Today marks a tremendous victory in the fight for LGBTQ rights as Minnesota becomes the 12th US state to legalize gay marriage. On August 1st 2013 same-sex couples across the state will be able to become legally recognized partners. The legal equality of same-sex marriage comes with a total of 1,138 benefits that were previously withheld: families can adopt and have children with full rights granted to both parents, partners from other countries will be able to get green cards, legal processes for things such as inheritance will recognize their family, benefits in the workplace will be extended to all families, and transgender people will no longer be limited by the sex legally listed on their record in order to marry whomever they love – along with the basic and crucial right of legal recognition.

And as we celebrate, let’s be clear – these rights were won not by electing Democratic majorities into the state house and senate, but by the immense pressure that LGBTQ communities and activists have built for equality. There has been a seismic shift in public opinion on gay rights across the country, with a growing majority supporting marriage equality. These changing attitudes and recent legal victories are due to grassroots organizing, militant activism, and greater visibility of LGBTQ people.

Grassroots organizing turned Minnesota voters out in November to show their support for the right to marry by voting to keep marriage discrimination out of our state constitution. But little did the far right expect that this momentum would build into an offensive fight for marriage equality in Minnesota through petitions, call-ins to legislatures, education and mobilization through social media, and demonstrations for equality. Through this movement it’s become politically dangerous for DFL politicians to oppose gay marriage in Minnesota.

We must use this win for the LGBT movement as powerful momentum to fight for full legal equality for LGBTQ persons. While the legal recognition of same-sex couples will help dismantle homophobia, the structural economic inequality that LGBTQ persons experience remains. It is still legal to fire someone for being homosexual in 29 states and for being transgender in 34 states, LGBT youth homelessness rates are far above those of heterosexual peers, one in five transgender individuals have been turned away from healthcare (National LGBT Cancer Network), and 90% of LGBTQ students have been harassed (Gay, Lesbian and Straight Education Network). We need to keep fighting through demonstrations in the streets and organizing solidarity actions within our workplaces, schools, and communities until we have a truly just society where no forms of hatred and discrimination are tolerated.