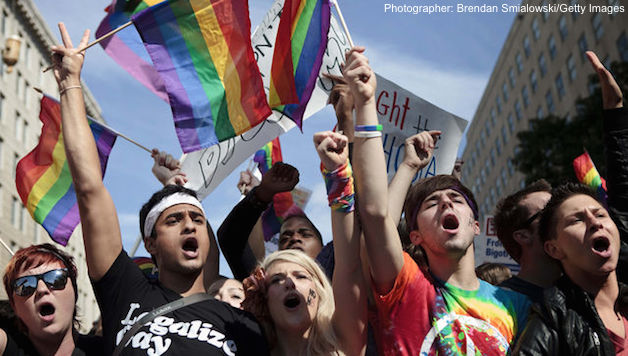 On November 6, voters in four states delivered a historic defeat to the right-wing agenda of legalized hate and discrimination against Lesbian, Gay, Bisexual, Transgender, and Queer (LGBTQ) people.

For the first time in U.S. history, a majority of voters came out in favor of same-sex marriage rights. Maryland, Maine, and Washington state passed ballot referendums to legalize same-sex marriage. Minnesotans voted down an amendment that would have banned same-sex marriage in the state’s constitution.

Same-sex ballot referendums passed despite a well-funded media scare campaign by right-wing and big business forces, and strong opposition from the hierarchy of the Catholic Church.

Support for LGBTQ rights has surged in recent years. A May 2011 Gallup poll showed 53% of Americans believe “same-sex marriage should be recognized by the law as valid, with the same rights as traditional marriage.” Changing attitudes and recent legal victories are due to grassroots organizing, militant activism, and greater visibility of LGBTQ people.

Since Vermont became the first state to allow same-sex civil unions in 2009, a string of important victories for LGBTQ rights have been won. Even before November 6, eight states and the District of Columbia had legalized same-sex marriage and ten states recognized civil unions.

In May of this year, a federal appeals court ruled the federal Defense of Marriage Act (DOMA) to be unconstitutional. DOMA codified non-recognition of same-sex marriages in federal law. Then in June, a federal appeals court ruled California’s Proposition 8, which banned same-sex marriage, to be unconstitutional. Both of these rulings are likely to be appealed to the Supreme Court and – if the Court agrees to review the rulings – it could be a watershed moment in U.S. History.

In years past, Republican strategists initiated ballot initiatives to ban same-sex marriage to increase turnout of conservative voters and distract from their anti-worker policies. This year, that strategy blew up in their face.

In fact, while the Democrats essentially ignored same-sex ballot battles in previous years, with growing support for LGBTQ rights, they poured millions into the 2012 ballot battles. Democrats used same-sex marriage as a cultural wedge issue to turn out their voting base in the same cynical manner as the Republicans before them.

In Washington state, where the Democratic Party has controlled government for years, they finally moved to legalize same-sex marriage now that it is politically expedient for them. The Democrats needed a left cover to shift attention away from their unpopular budget cuts to vital social programs.

Obama himself has waffled on marriage equality and LGBTQ rights in general. Not until October 25, desperate to turn out voters for his re-election, did Obama finally call for the repeal of DOMA and endorse the same-sex state ballot initiatives. This only came after surveys confirmed a majority of Americans support marriage equality.

The victories for marriage equality represent a major step forward. Yet bread-and-butter economic issues, which more significantly impact the lives of working-class LGBT people, remain off the Democratic Party’s agenda.

LGBTQ people face rampant discrimination in employment and housing, increasing levels of violent assaults, and police brutality. A report by the UCLA Law School shows much higher poverty levels for LGBTQ people, and especially for lesbians and transgender people.

According to a study by the scholar/activist Richard Juang cited in the Transgender Workplace Diversity blog, the nationwide unemployment rate for transgender people is eight times higher than the general population, and 60% of trans people earn less than $15,300 per year. A survey by the National Center for Transgender Equality found that 90% of trans people experience harassment, mistreatment, or discrimination on the job.

In 29 states, an LGBTQ employee can be legally fired on the basis of sexual orientation or gender identity. Since 1994, Federal Employment Non-Discrimination (ENDA) bills banning LGBT (and sometimes transgender) employment discrimination have been repeatedly introduced in Congress, including times when Democrats controlled both Houses, but are consistently rejected.

Mainstream LGBTQ groups like the Human Rights Campaign fail to confront the structural inequalities inherent in capitalism. They remain tied to the Democratic Party, and therefore limit their demands and tactics to what is deemed “achievable” under the corporate-dominated political system.

But history has shown that all important concessions – including same sex marriage – granted by the ruling class is the byproduct of struggle and pressure from below. Now is the time to step up the movement for full equality for LGBTQ people, linked to a program to end all forms of hate, bigotry, and oppression under capitalism.

Equality Act Passes the House – Can It Stop LGBTQ+ Discrimination?