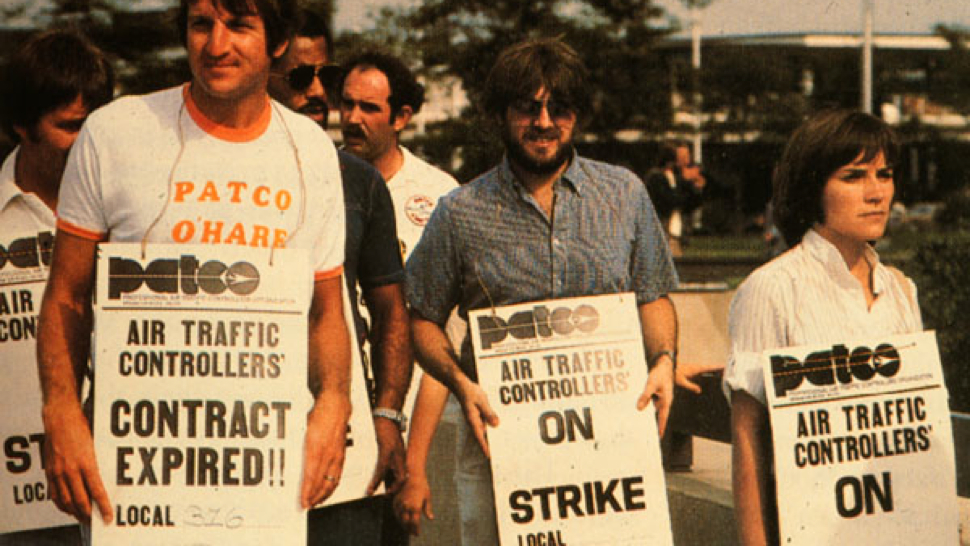 This August will mark 30 years since President Reagan ordered the firing of 11,359 striking air traffic controllers. During the massive workers struggle in Wisconsin, Governor Scott Walker bragged that this was going to be his PATCO moment. He was referring to President Reagan’s 1981 firing of air traffic controllers, which in turn was the opening shot in a massive anti-labor offensive by the employers to demand huge concessions on wages, benefits and working conditions.

It is not just Walker who is looking for a “PATCO moment,” but the ruling class as a whole. Once again, there is a concerted offensive by Republicans and Democrats, as can be seen by the anti-union drives against public workers in Indiana, Ohio, Michigan, Massachusetts and vicious budget cuts across the country.

The fear has also been expressed among labor activists that if we do not act decisively we will be confronted with another “PATCO moment.” What does this mean? Why is the U.S. Trade Union Movement haunted by the ghost of a strike that took place 30 years ago? What lessons can todays labor activists learn from the events of August 1981?

On August 3, 1981, the Professional Air Traffic Controllers Organization (PATCO) struck against the Federal Aviation Administration, and walked off the job. Immediately the full force of the state apparatus was turned on the strikers. President Reagan issued his infamous ultimatum invoking the Taft-Hartley Act: return to work within 48 hours or be terminated. Two days later on August 5, Reagan fired the 11,345 striking air traffic controllers who had ignored the back to work order. Federal Marshals and the FBI were used to hunt down strikers. Their phones were tapped and their families were harassed. Strikers were arrested, fined, and jailed. The unions strike fund was seized by the courts and Reagan declared the strike “over.” The union was decertified in October 1981 and forced into bankruptcy by the courts. In the depths of the terrible 1981 recession 45,000 replacements applied for the 12,000 open PACTO jobs.

And as union workers across the country held their breath waiting for the call to action, the AFL-CIO national labor leadership was largely silent. Corporate America on the other hand, took the opportunity to launch a full out assault on labor. The Federal takedown of PATCO was a green light to big business to take on the unions. The revived doctrine of “Permanent Replacement” was used to break strike after strike in the 1980s and ’90s. During this anti-labor offensive, workers and local unions were left to face the combined forces of big capital in their own isolated struggles.

Despite the heroic resistance of many local unions in a series of bitter strikes, faced with the combined attack of anti-union injunctions, armies of scabs, police and the National Guard, they were defeated. The names read like a list of the fallen after battle: PATCO, Hormel P9, International Paper, Caterpillar, Staley, Detroit News, Pittston, Greyhound, Eastern Airlines, and many more. Today we see the results, unions have been driven down to under 7% of the private sector workforce. Wages and working conditions for the broad mass of workers have collapsed while the rich have gotten richer and richer. The national labor leadership of the AFL-CIO failed to mobilize and counter the offensive leading to further attacks and decline in workers rights and union density.

A Brief History of PATCO

Through the late 1960s and early ’70s, a core of activists had built PATCO from a loose federation of company unions and professional organizations into a fighting union. In its 12 years of existence, PATCO had developed a reputation as a union that was aggressively defending its members working conditions, public safety and the reform of air traffic control practices. Through a series of militant job actions, sickouts, and slowdowns they had won union recognition, serious gains in wages and working conditions, and engaged the FAA and the Airlines in a public discussion about air travel safety and regulation. One of the key demands of the union in 1981 was relief from the Civil Service Reform Act which would give them full recognition as an industrial union and the legal right to strike.

Despite its militancy there were problems. PATCO was hamstrung by a lack of internal democracy and a failure to build solidarity with other unions in the industry. The great majority of the members came out of the military, and military culture and tradition was carried over into the internal life of the union. Highly skilled, well paid, confident in their strength and their ability to shut down air travel, they were seen as prima donnas, similar to the pilots, and had crossed the lines of other airline unions in the past. In the final analysis, PATCO was relying on an overconfident assessment of its own strength, and its faith in the promises that President Reagan had made to the leadership of PATCO during the 1980 campaign.

The FAA and the airline industry were taking things very seriously. Alarmed by the rising strength of PATCO through the 1970s, the Airlines and the FAA increased pressure in the workplace and viciously fought PATCO on every front. This was 1980 and Big Business was on the offensive. They could not tolerate the solidification of a new militant fighting union at the heart of its critical transportation infrastructure. Under Democratic President Carter, The FAA formed a Management Strike Contingency Force. The legal strategy was outlined in advance. Lists of activists were drawn up with injunctions and arrest warrants already drafted.

As management tightened the screws, pressure was building from below to resist. The work environment in the late seventies was characterized by speed ups and mandatory overtime. Short staffed and working without breaks while aging obsolete equipment failed around them, controllers were often reduced to tracking planes with bits of paper taped to inoperative radar screens. Because of these conditions 89 percent of controllers left before retirement age and about 40 percent of these collected disability. This was reflected in PATCOs main demands which centered on safer working conditions, a 32-hour workweek, updated computer equipment and retirement after 20 years of service.

The Airlines smelled blood. The FAA challenged the union for control of the shop floor, provoking militants, and handing down excessive discipline for minor offenses in the workplace. As bargaining broke down and workplace anger intensified, the PATCO leadership was close to losing control of the situation. The FAAs final offer was voted down on July 30, 1981 with 95% voting against. It looked like the most militant locals were going to wildcat with or without approval, while a significant minority of PATCO members were unsure and opposed to strike action. Caught between a rock and a hard place, their failed strategy collapsing around them, the leadership took one last strike vote: 86% of the membership voted to strike, and on August 3, 1981 PATCO began its first and last official strike.

Despite having the backing of a determined, militant, majority of workers the strike showed significant weakness. 15% of the controllers crossed the picket line on the first day. After Reagans back to work order another 8% crossed the line. By using supervisors, scabs, and military controllers, the FAA was able to keep traffic at 60% of pre-strike levels and moved steadily to restore full service. In order to break the union, the FAA kept the planes flying without regard for public safety. It was 10 years before staffing levels approached normal conditions.

The most significant factor in the defeat of the PATCO strike was the refusal of the AFL-CIO to come out in support of the strikers. The leadership failed to recognize the decisive nature of the situation and that Reagans firing of the PATCO strikers was an open declaration of war on the American working class. It was imperative that the unions counter the attack with a national shutdown of air travel and organizing mass demonstrations across the country against Reagan and the bosses.

Instead the AFL-CIO leadership hid behind their lawyers and continued to try to placate the employers with concessions and partnerships which only led to new attacks. The massive, half-million strong Solidarity Day rally in Washington DC in 1981 was largely symbolic, and despite pressure from below, there was no further action against the union-busting offensive that continues to this day. It is important for the workers movement to draw the correct lessons from the PATCO debacle of 30 years ago in order to educate and prepare a new generation of activists and to defeat this new offensive by the bosses. The great struggle of the Wisconsin workers has revived the ideas of the need for labor solidarity and militancy and shown the potential power of labor to defeat the bosses offensive.