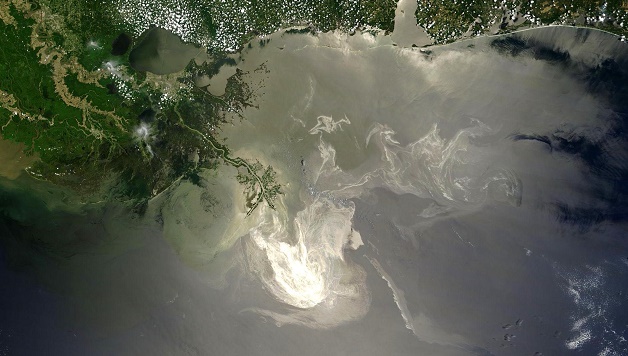 Published in The Socialist, publication of Socialist Party England and Wales

An environmental catastrophe threatens the U.S. coastline surrounding the Gulf of Mexico following an explosion and sinking of the BP leased Deepwater Horizon oil rig on 20 April.

As 240,000 gallons of oil each day gushes out of the destroyed oil well and with no immediate prospect of capping three major leaks, then the environmental and economic effects in the region will be severe and long lasting. The shrimp breeding grounds and fragile coastal wetlands will be ruined for years if a significant quantity of oil comes ashore.

In the state of Louisiana (where America’s second largest fishing fleet is based with annual sales of $1.8 billion), one in five of the population are already living in poverty. This number can only increase as the disaster unfolds.

U.S. president Barack Obama has been determined not to be caught napping during this crisis as his predecessor George Bush was when Hurricane Katrina devastated the region in 2005.

Obama, much to the dismay of his environmentalist backers, had recently announced the auction of new offshore oil drilling licences on the eastern U.S. seaboard to big oil corporations. He has now suspended his previous announcement and instead his administration has rounded on the oil giant BP – a relatively easy target given the company’s non-U.S. base and dreadful environmental and safety record (see box).

Obama has accused BP of only taking clean-up action over the spill four days after the explosion sank the oil rig. Unfortunately for BP’s rich owners, the Gulf of Mexico disaster coincides with the posting of the company’s massive £3.6 billion profit in the first three months of the year — mainly due to rapidly rising petrol pump prices.

The Gulf of Mexico disaster is being compared to the Exxon Valdez catastrophe in Alaska in 1989 when 11 million gallons of crude oil spilled from the grounded, single-hulled supertanker.

People are demanding answers from BP, and from the U.S. authorities, as to why the oil rig’s supposed ‘fail-safe’ mechanisms did not work.

But accountability for the disaster (and not just BP paying the estimated and inadequate $1 billion clean-up bill) would only come from having control over production. This in turn requires having public ownership of the oil industry, something that western capitalist governments who enjoy a close relationship with ‘big oil’ recoil from.

However, in the oil and gas producing countries of Bolivia and Venezuela elected left-leaning governments have part-nationalised their oil and gas industries. These populist measures have served as a blow to the interests of western imperialism in South America.

A socialist government that fully nationalised its hydrocarbon industries under democratic workers’ control and management – as part of an overall plan of economic production – would not only allow the safe production of energy but importantly, would move away from dependency on fossil fuels towards renewable energy supplies.

BP is the fourth largest company in the world. Its size and wealth have been built at great cost to workers’ lives and the environment. Eleven people are missing, presumed dead, after the Deepwater Horizon platform, hired by BP and owned by U.S. firm Transocean, caught fire and sank.

In 1991, BP was cited as the most polluting company in the U.S. According to PIRG research, between January 1997 and March 1998, BP was responsible for 104 oil spills.

Five years ago 15 people were killed and 180 injured at BP’s Texas City oil refinery. An investigation blamed the company’s global management for failing to heed warnings of catastrophic safety problems, aggravated by a “cheque-book mentality”.

This article first appeared in The Socialist, weekly newspaper of the CWI in England and Wales.