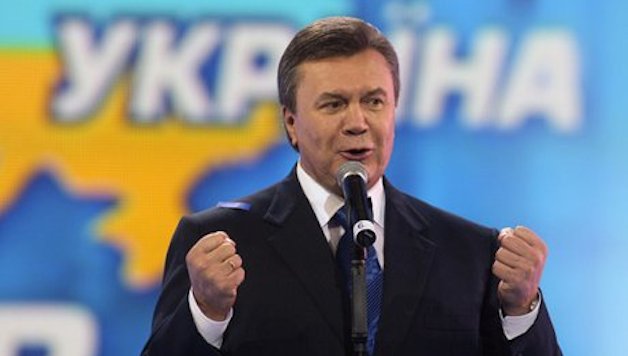 The new Ukrainian President Viktor Yanukovich is due to be inaugurated this week. He won the election two weeks ago, with just under 49% of the vote, beating his opponent, Yulia Timoshenko, by just 3.5% of the vote.

On the face of it, Yanukovich’s victory marks a comeback following his defeat by the ‘Orange Revolution’, 5 years ago, in which Timoshenko and outgoing President Viktor Yushenko mobilized a mass protest movement against apparent election fraud by Yanukovich.

The 2010 election campaign was dirty. With little to differentiate between the candidates on policy, much depended on personal attacks. In one speech, Yushenko complained that the choice was between two former convicts (Yanukovich spent time in prison for thuggery in his youth, Timoshenko for financial misdemeanors in the nineties). On another occasion, Yanokovich’s Party of Region’s MPs turned up at the parliament buildings, without neckties, as they intended to blockade proceedings and experience had already shown that ties can be used by opponents during a physical confrontation!

Timoshenko again claims that there was vote rigging. This is denied by election observers from organisations such as PACE (from the Council of Europe) and the OSCE. This is not an unexpected observation. One of the key representatives on the PACE delegation was Sergei Markov, a member of Putin’s Party, and one of the key spin doctors behind Yanukovich’s campaign in 2005.

For now, however, Timoshenko remains prime minister. This is the result of the agreement made after the Orange events, which transferred significant powers from the President to the Verkhovnaya Rada (‘Supreme Soviet’ or ‘Parliament’). Now the struggle for power has transferred from the presidential arena to that for control of the parliament, and the outcome is far from clear.

No side has a majority within the parliament and vote outcomes are determined by blocks or coalitions that develop around each issue. Deputies switch parties at the drop of a hat, depending who offers the best inducements. The continuation of the current stalemate, however, is blocking the implementation of a deal for a $16.4 billion bailout programme from the IMF, suspended at the end of last year because the government was not prepared to make the necessary budget cuts before an election.

The IMF has also insisted on another condition; the restoration of political stability in Ukraine. How this can be achieved however is difficult to see. When it appeared that Yanokovich would win by a larger margin, he promised to call early parliamentary elections assuming that his party would be strengthened. Now this is not certain. On the contrary, it is more than likely that a new party formed by the third-placed candidate could gain a significant presence in the Rada. A further consequence, following the collapse of Yushenko’s vote mainly amongst hard-line nationalists, could well be the emergence of a more significant right wing nationalist/neo-fascist block, getting most support in west Ukraine. Up to now, Ukraine is almost the only central-east European state with no large far-right block.

So, whatever decision Yanukovich now makes, he has a problem. If he does not call an early election, he will face opposition within the parliament. If he calls an election, an even firmer opposition block could result. If he takes a risk, calls an election, and wins a firm majority he would move to reverse the constitutional reforms of 2005 and strengthen presidential powers. This threat is an important given the current situation in the Ukraine. The depth of the economic crisis, the disappointment of the population following the restoration of capitalism and the results of the ‘Orange revolution’, means that opinion polls have been showing significant support for “a firm hand”. More and more, Yanukovich echoes these calls. This raises the possibility that the Ukraine could move away again from ‘democracy’ and end up with a regime more akin to that in Russia today. Timoshenko could then be forced into a more open non-parliamentary opposition.

This would be very dangerous. Although the main election candidates toned down their nationalist rhetoric, to a degree, during their campaigning, the final results demonstrated a more marked polarisation of the Ukraine on national lines than that seen even in 2005. Timoshenko won every region in the west and central Ukraine, including a 65% majority in Kiev whilst Yanokovich won every region in the east and south Ukraine. In 2005, the central belt saw mixed results. This time it was clearly for Timoshenko and she has already discussed openly whether she or a member of her party should stand for mayor of Kiev and use the post to undermine Yanukovich’s power base.

It is clear that the working class of the Ukraine, battered by the current economic collapse, has, once again, ended up the loser from this election. Only when the working class begins to organise its own political alternative can we see any possibility of an end to this political and economic chaos and the squabbling of the different sections of the ruling elite over power and wealth. Only a united working class resistance and a socialist programme would see the Ukraine t genuinely determine its future and fight for a socialist Ukraine, as part of a socialist federation of the region.