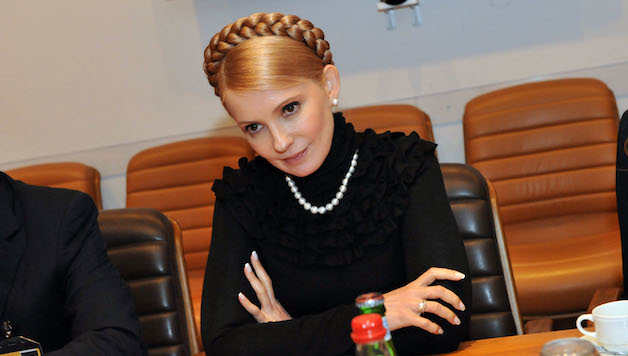 As economic crisis engulfs Ukraine, the country’s prime minister, Yulia Tymoschenko, and the president, Viktor Yushchenko, are engaged in a fierce power struggle, centered around a wrangle over whether early elections will be held on 7 December.

The two leaders’ governing alliance fell apart, last month, after Tymoschenko lined up with the opposition Party of the Regions to cut back the president’s powers, which was subsequently repealed. Tymoschenko and Yushchenko also clashed over the recent Georgia/Russia war, with Yushchenko accusing Tymoschenko of siding with the Kremlin.

Yuschenko dissolved parliament and called early elections but Tymoschenko went to a Kiev court to oppose the president. Reflecting the deepening divisions within the state machinery, pro-Yushchenko police and pro-Tymoschenko riot police reportedly squared up to each other outside the court house.

The court agreed with Tymoschenko and froze election preparations. In response, Yushchenko invoked his considerable powers. Not happy with the court findings, Yushchenko simply ordered the court abolished! He then summoned the National Security and Defence Council, which ordered Tymoschenko’s government to allocate around US$85 million to finance an early election campaign. Tymoschenko resists, stating that in the middle of an economic crisis this is no time to talk of new elections.

Yushchenko accused Tymoschenko of destroying the ‘Orange’ coalition that arose from the so-called 2004 “Orange Revolution”. This saw mass protests in central Kiev against election fraud and the authoritarian rule of former president Yanukovich, who was allied to Russia. The Western-backed Orange movement swept Yushchenko and Tymoschenko to power but the following years were marked by a series of highly unstable government administrations. These reflected the competing interests of different sections of the Ukrainian ruling elite, as well as the involvement of outside big powers, particularly the US and Russia.

In all of this, the key players and political blocs have shown there is no such thing as permanent allies or principles, as far as Ukraine bourgeois politicians are concerned, just permanent interests. Previously, Tymoschenko was a public hate figure for the Kremlin, when she was the Orange co-leader and darling of the West. Tymoschenko now appears to have won Russia’s most favoured politician status in Ukraine, following recent gas and oil deals she helped broker between the two countries.

Tymoschenko struck a triumphant note when she returned to Kiev from Moscow, earlier this month, announcing a new gas deal with Russia that outlines a three year transition from discount to market prices, with the exact cost yet to be worked out. This follows years of tensions between Russia and Ukraine over gas prices and supplies, which at one point led to Russia cutting supplies during the winter period, provoking hardship for working people and crisis in the Ukraine government.

The new Tymoschenko-brokered deal establishes direct relations between Russia’s Gazprom and Ukraine’s Naftohaz, cutting out ‘middle’ companies from the lucrative gas market. Tymoschenko will argue it brings stability and that Ukraine will still pay less than Western European prices for Russia’s natural gas. Naftohaz said it will pay around $250-300 per thousand cubic metres, up from the present $179.5, while Europe pays around $500.

However, Tymoschenko almost did not make the visit to Moscow. After the presidential plane supposedly developed “engine trouble”, Yushchenko used this as an excuse to commandeer the plane reserved for Tymoschenko. This left Tymoschenko’s aides having to charter a private Slovenian plane to make the trip to Moscow. Following the gas deal in Moscow, Putin referred to Yushchenko as a “pick-pocket” in reference to the planes farce, which brought barely concealed laughter from Tymoschenko, standing at the Russian prime minister’s side.

Despite Tymoschenko’s sales pitch, the gas deal the price hike will mean Ukraine’s hugely energy inefficient economy could find itself facing a $16 billion bill, next year, to pay for an estimated 55 billion cubic metres of gas imports. This is out of a Gross Domestic Product of about $140 billion.

Tymoschenko’s rapprochement with Moscow has brought her political backing. “’The Russians are saying that they are ready to support the premier [(Tymoschenko)],’ said Oleksandr Todiychuk, president of Q Club, an international energy think tank based in Kyiv. ‘The president is being completely ignored while [ex-Prime Minister and Party of Regions leader Victor] Yanukovych has fallen out of favour.” (KyivPost, 8 October 2008).

Tymoschenko has a checkered business history, to say the least, which illustrates the rapacious and corrupt character of the competing gangster-capitalists that came to power in Ukraine following the break-up of the Soviet Union. In the 1990s, her company, United Energy Systems of Ukraine, resold Russian gas to Ukraine. Following a contract with the then Ukraine prime minister, Lazarenko, and Tymoschenko made huge fortune. However, her business and political ally later fled the country and ended up in a US prison after conviction for money laundering. It is estimated that Lazarenko siphoned off $1billion from Ukraine’s reserves. He is also accused of fraud, extortion, embezzlement and even conspiracy to murder.

On 25 September 2008, Yushchenko’s government threatened to extradite Lazarenko to Ukraine. This is seen as a none-too-subtle warning to Tymoschenko that the president will use the Lazarenko case to try to destroy her political career. Worried by this threat, Tymoschenko indicated she would try to work with Yushchenko’s Our Ukraine political block. On 3 October she signed the joint European Union-Ukraine declaration affirming Georgia’s ‘territorial integrity’, to try to signal independence from Moscow, which recognises Georgia’s breakaway Abkhazia and South Ossetia as “independent”.

Notwithstanding this, the divisions and tensions within the Orange bloc have only grown deeper over the last few weeks, leading to Yushchenko’s dissolving of parliament and call for December elections.

However, should Yushchenko force through an election, his polling chances looks very bleak. Latest opinion polls show Yanukovich’s Party of Regions and Tymoschenko’s bloc would get most votes between them, up to 25% each, with Yushchenko’s Our Ukraine struggling to get over the 3% threshold needed to enter parliament.

This is a startling turnaround for the ‘Orange Revolution’ leader, who was hailed as a ‘great democrat’ reformer in the West. Even in western Ukraine, the mainly Ukrainian-speaking part of the country, and Yushchenko’s traditional base, the president’s support has plummeted. A university student in western Ukraine told KyivPost: “’During Kuchma’s and Yanukovich’s time, prices were stable. Russia was not at our throat,’ said Ihor Barvinkov. Now it seems that we are living in a gas gulag because of Yuschenko’s Westernization efforts.”

Yushchenko’s Our Ukraine won majority support in western Ukraine in 2006 parliamentary elections but fell behind Bloc of Tymoschenko in 2007. A poll in September 2008 showed over 40% of voters in western Ukraine would vote for Tymoschenko for president, and only 14% would back Yushchenko. For parliamentary elections, the news is even worse for Yushchenko – he would gain just 9% support in the west of the country.

This bitter disillusionment was predicted by the CWI in articles written during and immediately after the Orange Revolution in November-December 2004, when masses came onto the streets of Kiev in the desperate hope that the Orange leaders would bring greater prosperity and democratic rights. We warned that Yushchenko’s pro-capitalist and pro-Western policies were no solution: “A new Yushchenko regime will most likely soon come into conflict with workers and youth in the industrialised east and will also bitterly disappoint those in the west, who are desperately looking for EU-style living standards.” (‘’Orange Revolution’ in Ukraine – An eyewitness account’, 22 January 2005, socialistworld.net).

Whoever presides over the Ukraine government in the next few months will have to deal with an economy deteriorating fast. On 14 October, Tymoschenko announced emergency measures to try to deal with bank failures, turbulent markets and rapid inflation, which hit 31% last May, compared with the same month the previous year. The only countries with a higher rate are Zimbabwe and Venezuela. The Ukraine government managed to bring the figure down to (still high) 16% in September. The latest world financial crisis caused the hryvna currency to fall by nearly 20 %, as investors pulled money out of Ukraine. Over $1.3 billion left the Ukraine banking system at the start of October. The stock market has fallen by nearly 70% since the start of 2008.

To kick-start the main sectors of the economy, Tymoschenko announced that the government will freeze transport costs, lower natural gas prices and plans to cap electricity costs for the steel and chemical industries. But many of the countries most vulnerable to the current global crisis are the ‘young democracies’ in the former Soviet Union and Eastern Europe, which following disastrous economic collapse in the 1990s saw some growth, only to collide with the new global financial crisis. The ‘medium sized countries’ like Ukraine, Poland and Hungary do not have the “deep pockets” to bail out banks and shore up economies. Over the last few weeks, Estonia’s real estates prices dropped 40%, stocks have plunged in Poland, and Hungary’s currency went down by 20%.

The deep political crisis and struggle for control of parliament is aggravating the dire economic situation. Tymoschenko wants to maintain her support and avoid a disruptive third parliamentary election in three years. She has her eye on the 2010 presidential elections. But Yushchenko believes he has no choice but to force through new parliamentary elections now.

Neither of the former Orange allies or Yanukovich’s Party of The Regions can offer a solution to the deep problems facing working people in Ukraine, either in the Russian speaking east or Ukrainian speaking west. Working people need a party that represents their class interests and which is not tied to Russian or American capitalist interests.

For the millions in Ukraine and throughout the former Soviet Union and Eastern Europe who managed to claw their way out of the worst aspects of 1990s ‘shock-therapy’ capitalism – which saw mass closures, job losses and a huge fall in living standards and life expectancy – the new financial and economic crisis is a cruel turn of events, which will have far-reaching effects on mass consciousness.

A mass socialist party in Ukraine would be a clear alternative to the corrupt capitalist parties and their poisonous nationalist rhetoric. During the ‘Orange Revolution’ events, in 2004/2005, opposing politicians, Yushchenko and Yanukovich, played the ‘national card’. Yushchenko openly sided with leaders from the Tartar minority in predominantly Russian-speaking Crimea. Yanukovich whipped up Russian nationalism in the east, where local leaders threatened to hold referendums on ‘autonomous rule’. These cynical, reactionary politicians will use nationalism to further their interests and to divide the working class. In times of extreme social, economic and political crisis, and in the absence of a powerful, united working class movement, unleashed nationalism can threatened to split the country into two and to provoke civil war.

Today, the majority Russian-speaking Crimea, in south Ukraine, is currently a hotly contested area, between Russia, which also historically uses Crimea for military purposes, and Yushchenko and his Nato friends. Possible Ukraine Nato membership is also a running sore.

The Committee for a Workers’ International (CWI) in the former Soviet Union calls for the creation of genuine independent workers’ organizations in Ukraine, to resist cuts and job losses and to fight for decent wages and conditions. Moreover, socialists call for the main banks and big industries to be taken into public ownership, under workers’ control and management, out of the hands of the greedy oligarchs, and for the benefit of all the people of Ukraine. A socialist federation of the region, on a voluntary and equal basis, is the only way to end poverty and crisis and the rule of oligarchs.