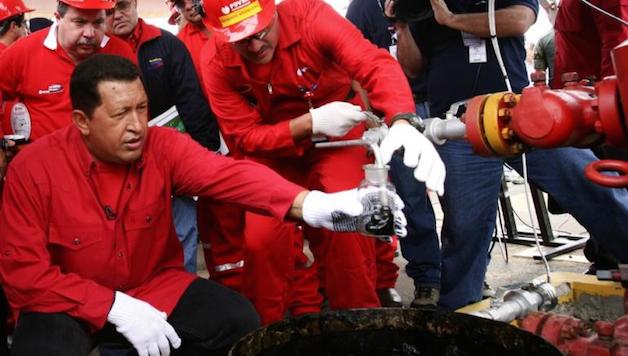 Since winning re-election to a third term with a commanding 63% of the vote, Venezuelan president Hugo Chavez has taken important steps towards fulfilling his campaign promise to take the country’s “Bolivarian Revolution” in a more radical direction.

In a January speech, Chavez declared, “We are moving towards a socialist republic of Venezuela … We’re heading toward socialism and nothing and no one can prevent it,” adding, “All that was privatized, let it be nationalized.” He even proclaimed himself a proponent of Leon Trotsky, who co-led the Russian Revolution with Vladimir Lenin saying, “I am very much of Trotsky’s line – the permanent revolution”

He then announced the nationalization of Venezuela’s largest private electricity company, Electricidad de Caracas, and the telecommunications giant CANTV (Verizon), two firms privatized in the 1990s.

Chavez has also replaced conservative cabinet members and announced the formation of a new party, the United Socialist Party of Venezuela.

These changes represent an important leftward shift for Chavez and reveal the extent to which the popular masses of Venezuela have embraced socialism as an alternative to neo-liberalism.

Against this background it is worth remembering that not too long ago, with the collapse of the Soviet Union, the capitalist media was proclaiming that socialism was dead. Not for the first time, the obituaries for socialism seem to have been a little premature!

In the early 1990s the CWI explained that while the collapse of Stalinism would throw back socialist and class consciousness for a time, socialist ideas would inevitably re-emerge on the basis of huge events and the experience of capitalism itself.

This has been borne out over the past few years with the beginnings of a socialist consciousness among important sections of workers in Latin America. This confirms how the ideas of socialism are rooted in the experience of the working class, and will inevitably develop and grow internationally in the next period, including in the U.S. With the huge obstacle of Stalinism (and Social Democracy) largely removed, the road will be much clearer for a new generation to find the ideas of genuine Marxism, i.e. Trotskyism.

The radical new turn by Chavez – after years of resisting calls for public ownership – is a reflection of pressure from below. Workers and the poor are pushing for the government to take more decisive measures to advance the revolution, reflecting frustration and anger at the persistence of extreme poverty and inequality.

While Chavez’s growing emphasis on socialism and his announcement of nationalizations are welcome steps, the reality is that the nationalization measures are relatively limited. Rather than seizing the assets of these giant companies and putting them under democratic workers’ control and management, the government is buying the controlling share of the company stock.

Venezuela will pay Verizon $572 million for a controlling share of CANTV. For Electricidad de Caracas, the U.S. based AES Corp. will receive $750 million. Purchasing 60% control of the Orinoco oil projects will cost an incredible $17 billion. When announcing these “nationalizations” Chavez was careful to add that he does not “…want the companies to go. …We just want them to be [minority] partners.”

Following the backwards logic of capitalism, billions that could be spent on job programs, health care, education, food, and housing for Venezuela’s poor will instead go to some of the world’s wealthiest corporations, including Exxon Mobil which earned $39.5 billion ($180 million/day) in 2006, the largest annual profit in American history.

Chavez’s references to Trotsky and his theory of permanent revolution have put these ideas on the agenda for the discussion for an audience of millions in Venezuela and throughout Latin America.

Trotsky’s “permanent revolution” explains that in the modern, imperialist, period of global capitalism the fundamental tasks neo-colonial countries face in order to break out of poverty and backwardness – economic development, land distribution, a stable democratic parliamentary political system, and independence from imperialism – cannot be fulfilled within the social and economic framework of capitalism or carried out by the native capitalist class, as was done historically in the 18th and 19th centuries in the U.S. and other industrialized countries.

As was proven in the Russian revolution, only the working class was able to break the chains with which backward Russia was bound to imperialism abroad and landlordism at home. This was only possible by passing over directly to the tasks of the socialist revolution, of overthrowing capitalism and spreading the revolution internationally.

Venezuela is an illustration of Trotsky’s theory. The weak Venezuelan capitalist class is economically dependent on foreign capital and cannot act independent of imperialism. Imperialism, in turn, craves the cheap natural resources and labor provided by neo-colonial countries like Venezuela, and organizes to keep them in a subservient, underdeveloped state.

At each stage we have seen the Venezuelan capitalists ferociously oppose even the most timid of Chavez’s reforms, while the working class and the poor masses have rallied to defend Chavez.

However, while Chavez is now speaking about socialism and “permanent revolution,” he has failed so far to take decisive measures to overthrow capitalism. Instead, he has carried radical reforms from above which limit the private market and strengthen state intervention and regulation of the economy.

Chavez has implemented many progressive reforms which have benefited the poor, such as the massive expansion of healthcare and education. But by refusing to organize the working class and peasantry to expropriate all major industry and large privately-owned farms, Chavez is leaving the door open for a right-wing counterrevolution to eventually reverse the reforms of the last eight years.

Venezuela’s economy remains largely in the hands of the capitalists, leaving the revolution susceptible to economic sabotage. Nor has there been a fundamental democratization of the police and army, leaving reaction with many agents within them.

Latin American history is full of left-wing leaders who tried to walk the middle ground between socialism and capitalism with disastrous results. Chavez’s reforms and nationalizations have already angered U.S. imperialism and Venezuela’s capitalist class. The Venezuelan masses have rescued him three times: in 2002 against a U.S. sponsored military coup, in 2003 against a bosses’ lockout, and in 2004 against a recall referendum. The further Chavez moves in the direction of socialism, the more intense the attacks from the right will be.

The reforms and social programs created by Chavez provide a glimpse of what’s possible under socialism. But to defend these gains and truly utilize Venezuela’s vast human and natural resources, capitalism needs to be overthrown completely by taking the economy from the hands of the elite minority and placing it under the democratic control of workers, peasants, and communities who are armed to defend the revolution and who can run Venezuela’s economy based on the needs of the majority.

A voice from the struggle

In January, during the World Congress of the Committee for a Workers’ International Kristofer Lundberg interviewed Johan Rivas of Socialismo Revolucionario (CWI Venezuela). Here are some excerpts:

Socialismo Revolucionario was active in the election campaign for Chavez. What did you do?

Our work was mainly within the unions. We organized public meetings and demonstrations. For example we had a meeting about “What is socialism and the task for the working class”…300 workers attended the meeting and 700 took part in a demonstration we initiated.

How are Trotsky’s ideas important to Venezuela?

The Venezuelan revolution confirms Trotsky’s theory of the Permanent Revolution. Trotsky explained that the workers and poor couldn’t stop halfway; in order to complete the revolution, capitalism has to be abolished. When Chavez first came to power in 1998, he advocated a so-called middle way, not socialism but capitalism with a human face. But there is no such capitalism. This, together with the pressure from below, explains why Chavez has gone further to the left.

What is Socialismo Revolucionario’s position towards the new United Socialist Party?

We welcome that Chavez has called for a new socialist party, but…it has to be a party based on the ideas and methods of class struggle…rooted in the trade unions, the committees in the barrios, and amongst the millions mobilized in Chavez’s election campaign. It has to be a democratic and fighting party; giving room and freedom for different trends and organized tendencies … We will fight to make it a party armed with a revolutionary program.