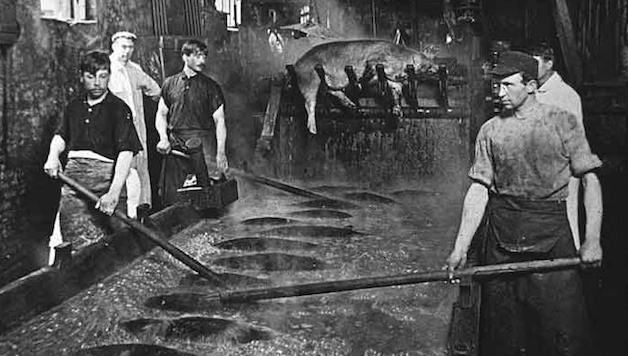 It is 100 years ago since the publication of The Jungle by Upton Sinclair. His devastating exposé of the meat packing industry in Chicago initially couldn’t find a publisher but on publication its success was instant.

Translated into 17 languages within months, The Jungle sold 5,500 copies in just one day.

To commemorate the anniversary, the socialist reprints this review by Alistair Tice which first appeared as part of a series on ‘Books that inspired me’. US president Theodore Roosevelt, it is said, choked on his breakfast and turned vegetarian when reading an advance copy of Upton Sinclair’s expose of the meatpacking industry. The Jungle‘s graphic account of the presence of chemicals, diseased meat and rodent excrement in sausages is enough to turn anybody’s stomach!

Appearing at a time when the practices of the “Beef Trust” were already under investigation, Sinclair’s book, which quickly became an international bestseller, helped force through Congress the long-stalled Pure Food and Drug Act and the Meat Inspection Act which became laws in June 1906.

Sinclair was one of the school of journalists and authors known as “muckrakers” who developed in the late 19th and early 20th centuries, exposing corporate and political wrongdoing in American society. He was introduced to socialism in 1902 and wrote The Jungle following the defeat of the 1904 Chicago stockyards strike.

The novel is based around the Lithuanian immigrant Rudkus family who come to America yearning a better life but instead find the wage slavery and misery of the mill, factory, sweatshop and slum.

Sinclair’s description of the slaughterhouse makes you, the reader, feel as though you can smell the warm, sweet, sickly stench rising from the blood and guts you are standing in! And the suffocating stink of the fertilizer plant makes your guts wretch as you are reading about it.

It is this ‘jungle’, these inhuman working conditions, that break the spirit of the novel’s central character Jurgis (pronounced Yoorghis). He arrives in America as a strong, hopeful young man, marries his true love Ona in the first chapter, and optimistic to build a better life for his family.

He overcomes each adversity by working harder and determining that he will not be beaten. But within a few years he loses his job, his home, his wife (who dies unattended in childbirth), his son (who also dies), his freedom (he is jailed for beating up his wife’s foreman who had raped her) and finally his hope (turning to drink, and abandons what’s left of his family)!

You’re reading the book thinking things can’t get any worse, then they do! But as this tragic story unfolds, the capitalist system of the “Beef Trust” and corrupt politicians is laid bare.

Sinclair doesn’t ram the political conclusions down your throat- indeed Jurgis, whilst seeing the injustice of it all, still gets trodden further and further down. With his spirit broken, he survives only by sinking into graft and corruption, and then works as a scab foreman during the stockyards strike.

Sinclair started writing The Jungle as a serialisation for the socialist newspaper Appeal to Reason but he didn’t know how to finish the story. He was writing the novel to propagandise for socialism but had, in damning capitalism, taken Jurgis so low, ‘lumpenised’ him, that such a conclusion could not flow from his demoralised, broken state. So the ending is contrived and socialism has to be brought in from outside.

Jurgis, taking shelter in a meeting hall, finds himself at a socialist election rally and becomes aware of the speaker who appears to be directly addressing him. Through the orator’s evangelical speech, Sinclair expounds his case for socialism. As he admitted later: “I went crazy at the end of the book and tried to put in everything I knew about the socialist movement.”

Jurgis is converted, a bit like a religious conversion, reflecting Sinclair’s recent discovery of socialism and the strong Christian influence in the American socialist movement at that time. Even so, it is powerful, passionate and persuasive, and provides an optimistic rallying call of: “Chicago will be ours!”

Sinclair remained active in the socialist movement for over 20 years but in 1933 he registered as a Democrat, and leading the End Poverty in California (Epic) coalition, won the primary and then narrowly lost the election for state governor. He continued to write well into his eighties winning a Pulitzer Prize in 1942.

The conditions Sinclair raged against have been spread by capitalist industrialisation to sweatshops around the world. Workers still lose their jobs, their homes and their families. Food is still adulterated. The current US president could have choked to death on a pretzel – but we still need socialism.

From The Socialist, newspaper of the Socialist Party, cwi in England and Wales