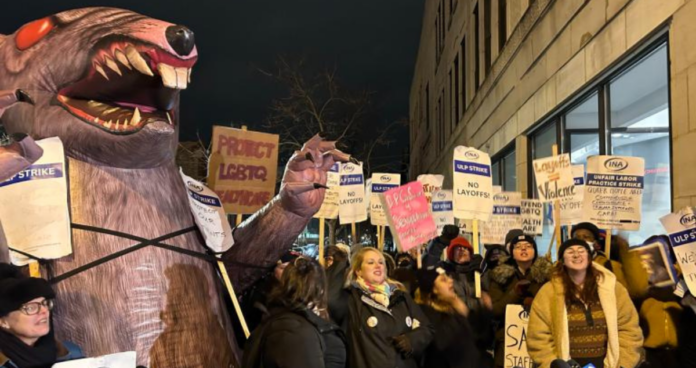 On Tuesday, January 2, workers at eleven Howard Brown Health Clinics and affiliated organizations across the Chicago area walked off the job in a three-day strike. Employees and supporters from other unions including CTU, AFSCME, AFT, and SEIU as well as community and socialist organizations joined the lively picket lines in solidarity with the striking workers.

Howard Brown Health Workers United (HBHWU) is the name of the union affiliated with the Illinois Nurses Association (INA). The union charges that Howard Brown Health illegally laid off 60 union employees and four non-union employees on December 30, after failing to bargain in good faith with the Illinois Nurses Association over the first contract. The union has filed an unfair labor practice charge against management.

The union was formed in August 2022, when employees voted to join the Illinois Nurses Association to address understaffing, long hours, low wages, high turnover, and workplace retaliation by management. In 2019, INA organized the Howard Brown Nurses Union, but after the vote in August, the union expanded to represent all of the several hundred employees in the eleven clinics, the three Brown Elephant Resale Stores, and the Broadway Youth Center.

The union is one of the largest healthcare unions organized in Chicago in the last decade. Members include retail workers, nurse practitioners and other practitioners, social workers, patient support staff, behavioral health teams, and some administrative workers.

During negotiations in the fall, management claimed a $12 million operating deficit and proposed a “voluntary separation agreement” – in other words, a layoff – for 100 of the unionized employees. In addition, management offered one week of severance pay for each year of employment and one month of health insurance coverage.

INS responded to Howard Brown Health management by requesting the 2022 financial records to justify the proposed layoffs. Management refused and proceeded with the illegal layoffs. On December 30, 61 employees received notices of job terminations and were locked out of access to emails and other work software, and phone calls with patients were cut off.

ProPublica reports Howard Brown Health CEO, David Ernesto Munar, received a salary of $300,000 in 2021. He gave himself a $100,000 raise during the COVID-19 pandemic, while employees providing services to the public received no additional compensation. CFO John McElwee got a salary of $247,835. Records also show Howard Brown Health took in $30 million more in revenue then it spent in 2021.

Erik Roldan, Director of Marketing and Communications at Howard Brown Health, publicly stated the $12 million shortfall for the July 2022-July 2023 fiscal year is the result of changes in the federal 340b Drug Pricing Program which allows pharmaceutical companies to keep a larger share of federal savings. Roldan also pointed to the end of federal funding for COVID-19 relief as a factor in reducing income.

Howard Brown Health is a federally-qualified health center, and receives federal funds to provide services to low-income patients. The clinics are nonprofit and also financed by grants, donations, and sales at their three Brown Elephant Resale Shops.

Howard Brown Health Clinics are the largest provider of health care and support services in the Midwest for LGBTQ people and for people living with HIV and AIDS disease. It also is an internationally-recognized center for Hepatitis B and AIDS/HIV research.

Howard Brown Health Workers United questions why management needs to layoff healthcare workers when it is expanding from serving 30,000 clients a year to 60,000 and opening a new facility. How can the organization afford to build a new clinic, but not afford to staff the clinic?

Striking union members on the picket line outside a Brown Elephant Resale Store reported to Socialist Alternative that they are concerned Howard Brown Health management is creating a for-profit health care system for the LGBTQ community in Chicago. Over a period of time, Howard Brown Health has evolved from a grassroots organization into a management-controlled financial enterprise.

The three-day strike in Chicago by Howard Brown Health Workers United is a rallying cry for unions, community, and civil rights organizations to come together to build working-class opposition to attacks on our standard of living from the bosses and pharmaceutical companies and attacks against oppressed groups from the right wing. We need to unite behind economic demands like universal single-payer healthcare paid for by taxing the wealthiest corporations. Healthcare should be non-discriminatory, gender-affirming, and include access to reproductive healthcare and abortion, and the people providing that healthcare should not just be barely getting by. But the bosses and the political establishment won’t give us that world – we need to build a movement and fight for it ourselves. Solidarity with Howard Brown Health workers!