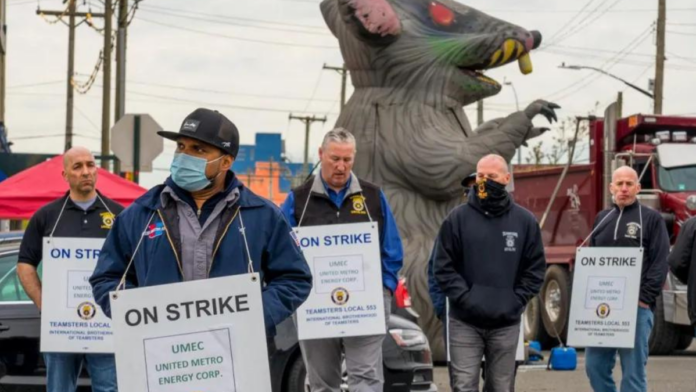 The labor movement is faced with unprecedented opportunities and challenges.  Inflation continues to get worse and a looming economic collapse threatens workers’ already meager living standards. Corporations consistently use economic downturns as opportunities to make cuts to benefits and wages on the job. These attacks can radicalize working class people, giving unions a historic opportunity to organize.

Support for unions is at historic highs. Polls show that 71% of people in the U.S. are in favor of labor unions. It will be on labor leaders across the country to step up and fight against the corporations demanding working people pay for the next crisis.

In March 2022 the new leadership of the Teamsters took office. For many Teamsters, Sean O’Brien and Fred Zuckerman represented a changing of the guard away from the corrupt Hoffa-led regime that sold out members contract after contract.  The O’Brien/Zuckerman slate won on the promise of a “…team dedicated to rebuilding the Teamsters as a militant fighting union from bottom to top.”

This new leadership will be tested on one of the most important battlegrounds in the U.S. economy: logistics. They will be tasked with negotiating a new contract for the 350,000 Teamsters that work at UPS. Unfortunately, the Teamster leadership is already showing signs of buckling against the enormous pressure from the political establishment and big business.  The only check on this would be to build a rank and file force capable of taking on both UPS and anyone else that stands in their way to get the best contract in decades in 2023.

Change We Can Believe In?

O’Brien and Zuckerman were voted into office with the support of the reform caucus “Teamsters for a Democratic Union” (TDU), but O’Brien has deep historic ties with the corrupt and bureaucratic Hoffa leadership dating back to 2006. In 2013 Hoffa rewarded O’Brien for his loyalty by making him responsible for the contract supplements for the UPS contract that year.

Members were overwhelmingly dissatisfied with the contract gains, or lack thereof, and voted nearly split with 53% in favor to 47% against. O’Brien negotiated 18 additional “mini contracts” that were later voted down by members.

Zuckerman and O’Brien only joined forces when O’Brien began to get blocked by Hoffa after wanting to reach out to locals about issues in the upcoming contract. O’Brien saw this as an opportunity to join forces to take out Hoffa and form an alliance not on mutual, principled program of fighting demands to create a more democratic and militant union, but to stop himself from getting iced out by Hoffa.

Today the O’Brien/Zuckerman alliance is built on a house of cards. Only 14.4% of the union voted in the election of the slate, which was the lowest turnout since 1991. Many old guard Hoffa loyalists are present throughout the Teamsters. There has been no signal, for example, that the O/Z slate will continue the fight into every local, which is a critical task in reestablishing any militancy in the Teamsters on a national level.

Organizing Amazon is the Key to UPS

There’s been a few signs that O’Brien does not actually plan to launch an all out fight against UPS or big business as he’s promised. Organizing Amazon, something the Teamsters have eyed for years now, has been put on the back burner in favor of focusing on the upcoming UPS contract. The Teamsters have hired about a dozen or so staffers to begin the organizing project at Amazon.  Although this is better than putting no resources into the campaign, it is totally insufficient for the scale of operations that would be needed to organize solid union drives at facilities across the country.

Where they have taken initiative, there’s a mistaken approach to organizing. Most importantly a failure to organize around bold, clear demands for the workplace. In a recent statement O’Brien said:

He’s framing a campaign to unionize Amazon as more about making Amazon a good company to invest in, rather than making it about workers needing to fight for $30 per/hr to make Amazon a workplace where you can actually make a decent living.

Many labor leaders take a similar approach to organizing. They prioritize having a relationship with the bosses and following their lead rather than fighting for what would most benefit workers. At the recent TDU conference, O’Brien told the room of hundreds of Teamsters that the future of logistics, particularly UPS, is a seven day work week. In order to “keep up” with the times, members should be prepared for that reality.

Unions helping the boss, and in this case UPS, to stay competitive i.e. reduce UPS wages to those of its often non-union competitors, is a race to the bottom for workers. When big business believes the union won’t fight, they become bolder in their resolve to drive down wages, ignore the contract, and retaliate against workers that stand up for themselves. It’s an ominous sign for the new O’Brien and Zuckerman administration, and should be a warning that rank-and-file workers will need to get organized.

The recent interference of the Biden administration into the railroad workers strike should be a warning shot for the Teamsters and others that may want to fight for a better contract in the coming year. The question here is will O’Brien and Zuckerman be willing to stand up to the Biden administration if they attempt to interfere with negotiations? The answer is it’s looking less likely by the day.

A national strike at UPS would have enormous implications for the U.S. and global economy. Approximately 3% of U.S. GDP goes through UPS and 6% through the Teamsters as a whole.  With 1.2 million members, a shutdown of that size would become a political crisis for the U.S. ruling class, and politicians from both parties. With the contract expiration happening in July of next year, the political pressure to cave in negotiations will be put squarely on the O’Brien leadership.

The leadership is talking out of both sides of their mouths already. In a recent post, Zuckerman was quoted saying “We want to go to UPS and kick the shit out of them.”  However, when the Biden administration forced the Teamsters into arbitration to stop a strike of railroad workers, O’Brien “welcomed” Biden’s intervention, even though the vast majority of workers voted against the rotten compromise.

The greatest barrier to rebuilding a fighting labor movement is the union leadership’s reliance and ties with the Democratic Party – and this could be a key stumbling block for the new Teamster leadership in gearing up for a fight against UPS. Unions spend hundreds of millions of dollars in dues money each election cycle supporting big business candidates. Socialist Alternative members have been arguing that union dues should instead go to organizing the unorganized at Amazon, Starbucks, and other workplaces, and into strike funds to support workplace actions.

TDU Is The Key – Who’s Co-Opting Whom?

Teamsters for a Democratic Union supported O’Brien and they have not acted as though they have any issues with his political ideas or former ties with Hoffa. Joe Allen and two TDU presidential candidates thought endorsing O’brien was a mistake. This highlights what is the most troubling trend in Teamster politics, the long decline of Teamster reform caucuses, most notably the political retreat of TDU. It is one thing to critically support candidates, it is another to uncritically throw your lot in with them as TDU has done with O’Brien.

To keep a check on the business-union politics of O’Brien, a political transformation would need to take place inside the ranks of TDU. TDU could start this process tomorrow if they wanted. This should include making TDU much more open to new membership and adopting a clear program of demands to bring especially new members around them. This needs to include mobilizing members of TDU to union meetings, putting forward ideas for the next UPS contract fight, such as $10per/hr raises, an end to the two-tier system, and an end to part-time work.

At the TDU convention last month, members of Socialist Alternative were there putting forward the need for TDU to become a fighting and political force in the Teamsters. This means ending ties with Democratic politicians that never deliver, fighting for bold, clear demands, and preparing now for a strike in 2023. UPS and Amazon are used to getting their way because union leaderships across the country don’t believe their members can fight and win. We need to strengthen TDU to become a real opposition to business-union politics by forming a socialist wing in the TDU.