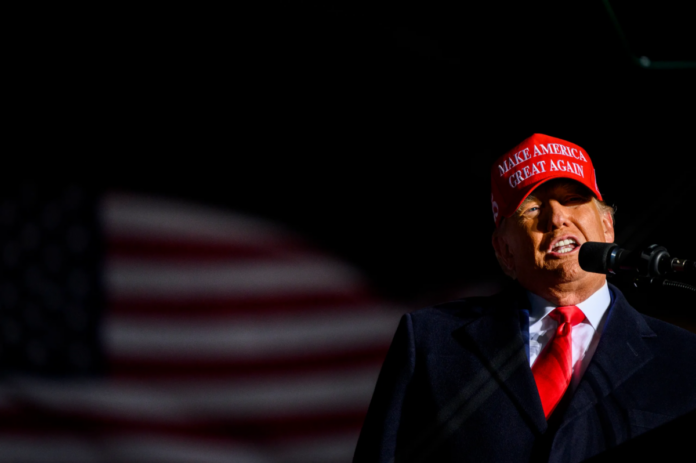 Though a “red wave” never materialized in this year’s midterms, the narrow majority won by the Republicans in the House means that the extreme-MAGA wing of the Republican Party will have more leverage than ever. In this context, the question of whether Trump could win a second term in 2024 seems straightforward: yes, he could still win. But this poses only more questions. What would a Trump victory and second term look like? And, perhaps most importantly, how can we fight back against a renewed offensive from the right wing?

For some Democratic pundits, the answers are simple: people aren’t smart enough or informed enough to know what’s best for them, and the solution is “voting blue no matter who.” This simplistic analysis is exactly what got us here in the first place, and we need to look deeper to find the answers that can equip working and young people to fight back against Trumpism.

Nearly two years into the Biden presidency, things have gotten worse for working people and the oppressed. Inflation is at a runaway pace, rising interest rates put home ownership further out of reach for a generation of workers, abortion right have been gutted, gun violence is on the rise, and Biden is building “Trump’s” anti-immigrant wall along the southern border. Especially with the “Squad” becoming apologists for Biden, most people get no inspiration from the Democratic Party.

No amount of attacks on Trump’s character will trick people into thinking the Democrats have done a good job in power. Now, with Republicans making gains in the midterms – limited as they may be – the gridlock in Congress will only get worse, and the Democrats will fail to deliver. It didn’t have to be like this, but the Democrats are fundamentally controlled by big business, and their leadership continues to move to the right despite all the performative “woke” rhetoric.

While avoiding the central question of the economy, Democrats focused on abortion rights in the midterms. Cynically, Democratic candidates made fundraising appeals in the aftermath of Roe being overturned instead of mobilizing mass protests to defend reproductive justice. The Democrats had many opportunities over the course of decades to write abortion rights into federal law or to “pack the courts” to prevent overturning Roe, but they chose to keep the threat alive, likely for short-sighted electoral consideration. In 2024, a Democratic focus on abortion and/or the January 6th attempted coup will be less effective than it was this year.

The Democrats are not only overseeing runaway inflation, but we are also on the cusp of a renewed recession and the possibility of a global depression. Working people want solutions for the economy that neither big business-controlled party can provide.

The Republicans have the advantage in posing as an opposition even though they have no real answers either. Democrats won’t deliver Medicare for All because they’re beholden to their insurance and pharmaceutical company funding. They won’t tax big business to create an environmentally sustainable program of quality union jobs because they depend on corporate backing. More than this, Democrats can’t overcome the boom and bust cycle that is inherent to capitalism. We can’t depend on billionaires or their political servants for solutions.

Why Does Trump Control The GOP?

Despite his 2020 election defeat and non-stop scandals, Trump controls the GOP now more than ever. While Trump’s frenzied endorsement of 300 candidates in the midterms, many of whom hold extreme and offensive views, cost the Republicans the expected “red wave,” this does not fundamentally change the balance of power in the party. In fact, with a narrow majority in the House, the extreme Trumpist representatives will have increased power to disrupt business-as-usual. They could become a major thorn in the side of Republican leaders like Speaker of the House Kevin McCarthy.

Trump’s message combines anti-establishment rhetoric against “free trade” deals that drove millions into dead-end jobs and “isolationist” foreign policy rhetoric that contrasts with decades of warmongering political consensus. All while playing on rural and suburban voters’ racist fears, hate of city-dwelling elites, and “strong man” attacks on Democrats. The raw material for this political polarization existed without Trump, and the covid “culture wars” intensified the situation. Given the Democrats’ regular practice of gaslighting poor and working people, for example insisting inflation isn’t that bad, the Republicans are far better positioned to make gains as the economy goes into further decline.

Trump and the Republicans have also gotten more support from people of color than they’ve enjoyed in decades. This opening is left due to the Democrats offering nothing more than rhetoric as institutional racism gets worse on many fronts.

While leading Democrats also use their power to enrich themselves through “insider trading” scams, they attack Trump’s very real corruption and anti-democratic maneuvers. But just focusing on the threats to democracy likely won’t be enough to mobilize a base that can decisively defeat Trump, and the consequences could be quite severe for working people and the oppressed. We can already see under Biden that the far right is growing, and the tragedies of right-wing political violence could become something much more organized and threatening in the coming years.

Seeing this terrible situation, many hope that Trump will get sick and be unable to run. While it’s tempting to wish for this given what a repugnant individual Trump is, the political polarization underlying his rise is inherent in this period of capitalist disorder. There’s also a danger that a more effective, younger Trump-type could emerge with even more dangerous politics. On top of this, some in the ruling class have floated the idea of trying to legally prevent Trump from running, but this would likely backfire, whip up Trump’s base, and motivate them to vote in larger numbers than even 2020’s high turnout.

It isn’t inevitable that Trump wins in 2024. As he emerges back into the spotlight, he could commit big blunders. However, due to the undemocratic electoral college, he could again lose the popular vote and gain back the White House. More than this, Republicans have worked hard in the last two years to disenfranchise voters and put Trump loyalists into key positions with the 2024 elections in mind. Socialists will need to be prepared to defend democratic rights and mobilize working people against any attempt to steal the election. At the same time, we should recognize that the January 6th debacle was a deep embarrassment for U.S. capitalism that they won’t want to see repeated.

Trump entering the White House in 2024 would be overseeing a world in crisis. This would have the potential to undermine him, but it would also create more polarization and the potential for global chaos. Which wing of the ruling class has power does affect the world situation, but movements from below have a decisive impact. History has instructive lessons on this.

Richard Nixon was a deeply right-wing, racist person. Still he ruled from 1969-1974, a high point for Black power, women’s liberation, and labor organizing in the U.S. Under his watch, Roe became the law of the land, union power increased tremendously, and progressive legislation was passed on numerous issues, including the environment.

Compare this to Bill Clinton’s rule in 1993-2001, a low point for struggles in the U.S. Under Clinton, horrendous free trade deals gutted union jobs, welfare was severely undermined, and the criminal injustice system took on policies of mass incarceration. The key difference was the strength and weaknesses of movements.

In the coming two years, strong movements based on a working-class program could cut across support for Trump. Recent union drives and strikes are a key factor that can push back against right-wing populism. Transforming unions into fighting organizations that also put forward a political alternative to both parties is a crucial task for socialists. We also need vibrant street protests, direct action, and ongoing organization for movements against oppression, from anti-racism to women’s liberation to trans rights and beyond. The Democrats and the bureaucrats connected to them try to push our struggles into “safe” channels, and we need to resist this through strong worker organization from below with socialist ideas and methods.

Still, many people will ask, “can’t we organize in our workplaces and communities while still voting Democrat to stop Trump?” Problem is, electing Democrats only creates more breeding ground for right-wing populism, and it’s urgent for working people to have our own voice in politics. With looming environmental and economic devastation, we need to make steps in this direction now, even if it spoils hopes of corporate Democrats. Socialist Alternative’s work in Seattle is a model for combining independent electoral politics with a working-class movement-building approach.

Many on the left say that a new mass party of working people isn’t possible because of our electoral system. However, times of crisis, like the one we’re in now, opens up new possibilities. The Republicans themselves rose rapidly in the context of a looming Civil War. That new party helped overthrow slavery less than 160 years ago, and we urgently need a working-class party today that helps to end all exploitation and oppression.