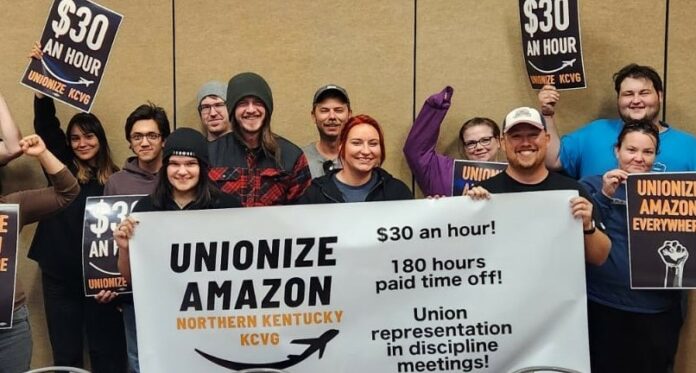 In late September, Amazon announced that workers company-wide would not receive the expected $2 per hour “Peak Pay” increase during the period of breakneck pace over the holiday season. Since then, we’ve also learned that Amazon squandered billions on stock buybacks and failed investments.

In response, thousands of workers around the country took to Amazon’s “Voice of the Associate” board in outrage over Amazon’s insulting ‘cost-of-living’ raises, which were as low as $0.40/hr in some areas, essentially amounting to a pay cut given inflation. Workers here at the Cincinnati/Northern Kentucky Air Hub, known to workers as KCVG, immediately started petitioning our coworkers for the raises we deserve.

We found that hundreds of our coworkers felt the same way, and in addition to the peak pay issue, workers began raising other demands about our workplace. On November 3, Amazon management assigned workers a weekly mandatory overtime (MET) shift from November 27 to December 23 during Peak Season, with only three weeks’ notice, leaving many workers to scramble over alternative plans for necessities like child care, second jobs, course schedules, etc.

A growing group of workers at the Northern Kentucky Air Hub, a $1.5 billion facility where Amazon packages are sent by plane across the country, began talking about how the only way to win any lasting change at Amazon would be by forming a union.  We met almost daily after work to discuss the key demands, make decisions democratically, decide the next steps in the campaign, and formalize our independent group of coworkers.

The next step is to put forward our demands, launch our campaign to unionize our workplace, and begin seeking an existing union that is willing to collaborate with our organizing committee to collect union authorization cards.

Our most popular demand is for a $30/hr starting wage. Amazon workers have made Jeff Bezos the third-richest man in the world. On top of that, inflation has sent prices of basic necessities like gas, groceries, and rent through the roof. Winning $30/hr at Amazon KCVG would allow us to afford a better standard of living, and raise the expectations for all workers to fight for more.

In addition, workers are calling for 180 hours of paid time off, without a cap on accrued time. KCVG Learning Ambassador Steven Kelley said, “We’re working to live, not living to work. Amazon’s annual turnover rate is 150% because we’re running ground support equipment (GSE), supervising planeside operations, and training our coworkers without a real pay incentive. We deserve to be paid for those responsibilities and have real time off for ourselves and our families.”

Workers are also fighting for union representation at all disciplinary meetings. “Management selectively enforces the rules in our workplace to intimidate us,” said Annie Gilb, a ramp worker at KCVG. “With a union, we will have clear disciplinary standards, representation in every meeting with HR or management, legal resources, and a transparent process to address grievances.”

There are many other important demands around seniority, transparency, and safety that workers democratically discuss at our weekly meetings. We understand the importance of continuing to identify issues, especially from KCVG workers of different genders, ethnic or racial backgrounds, and job categories.

These demands are included in the campaign’s initial trifold leaflet, which includes Spanish and French translations to be accessible to the widest possible layer of workers at the facility, many of whom speak English as a second language. “In order to win a union, we have to act like a union,” said Griffin Ritze, a cargo tug driver at KCVG. “Unions are built on clear demands like $30/hr, a basis of mutual respect and solidarity with our coworkers, and a willingness to take collective action to win.”

Taking On Amazon, A Union-Busting Giant

Amazon is well aware of the public opinion polls that show 71% of workers support unions. That’s why the only way Amazon can succeed at stomping out a unionization effort is to lie, manipulate, and intimidate workers to vote against their own interests. Their union-busting apparatus pushed them to victory in the union elections in Staten Island, NY at the LDJ5 fulfillment center and in Albany, NY at ALB1.

KCVG workers know we need to get out ahead of Amazon’s union-busting operation. “Amazon won’t explain that dues make our union strong by giving us the resources we need to win our demands and defend us from retaliation,” said Braeden Pierce, a ramp worker at KCVG. “We vote on the amount, which will always be much lower than the raise we win in a contract.”

Amazon can spend endless amounts of money on union-busting. We push back against this by pointing out that our union’s messaging and strategy at KCVG is decided democratically by workers ourselves. Amazon’s high-paid, professional consulting firms who come up with misleading anti-union lies are the real “third party.”

While Amazon viciously opposes unions, Amazon couldn’t operate without unionized labor. Amazon Air pilots are members of Teamsters 1224. Union labor builds Amazon’s warehouses. Unionized workers at UPS and the USPS handle a third of Amazon’s deliveries. These workers can directly support the struggle by refusing to cross picket lines and handle Amazon’s packages in the event of pickets, walkouts, and strike action.

“The second I learned about the organizing at the Air Hub, I immediately donated $1000 of my own salary to the cause,“ said Ryan Timlin, the President of Amalgamated Transit Union Local 1005 and member of Socialist Alternative. “The rest of the labor movement needs to put real resources into supporting these workers too.”

Amazon Air was flying 187 daily flights as of March of 2022, doubling in size over the last two years. A third of the newest conversion of the 737 cargo jets have been purchased by Amazon. The development  of major Air Hubs in Leipzig/Halle (Germany), San Bernardino, and Cincinnati / Northern Kentucky has positioned the company’s air freight network within 100 miles of 73% of the U.S. population and expanded their distribution in Europe.

Jeff Bezos personally broke ground on the KCVG Air Hub in 2019. The facility is intended to become the epicenter of Amazon’s air freight operations where their Network Control Center is headquartered. Through completion of the site’s first phase of development, its current capacity is 33 planes, though it will eventually have enough aircraft parking for 100 cargo planes. For reference, the UPS Worldport in Louisville Kentucky has capacity for 125 planes.

New flights are being added every week. Currently, this facility alone processes upwards to 35% of freight in Amazon’s network, with further development bringing the site’s share of volume upwards to 80%. The work we do here constitutes a huge amount of Amazon’s profits; this in turn gives us enormous leverage in organizing to win what we deserve.

“Being able to successfully win this campaign would give us the ability to help our fellow workers get the benefits they deserve. It would give the workers the right to decide what is best for them,” said Jordan Martin, a ramp worker. “A victory at KCVG would inspire Amazon workers everywhere. We need as much support in this endeavor as possible and that’s why we’ll work as hard as we can to represent our coworkers.”