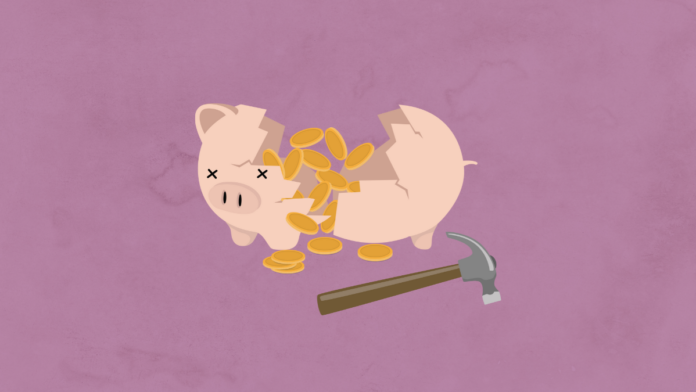 Just about every young person has asked themselves this question in the more stressful times in their lives. You’ve budgeted your paycheck and will barely afford your bills just when a dreaded “check engine” light appears on your car dashboard. Your rent went up and you need to find a new place, which means bracing to come up with first and last month’s rent, application fee, and security deposit. In the constant stress of scraping by paycheck-to-paycheck, we can’t help but ask: why is it like this?

“The cost of living.” It’s a common phrase that gets increasingly dystopian the more you turn it over in your head. Most of the time we try to keep our heads down and not think about it too much. It’s depressing and you can’t afford to sink into a nihilist gloom when you’re juggling your rent, utilities, car payments, gas, phone bill, and insurance payments. And that’s just for necessities, to say nothing of the countless monthly subscriptions required nowadays to access TV, movies, and music to make it all slightly more bearable.

That said, these days the “cost of living” is getting harder to ignore. With the price of common consumer goods and services shooting up, you can hardly go outside without bleeding money.

It’s not like most of us are asking for luxury mansions or superyachts. Let’s say you want a one-bedroom apartment in the city where you work. Rents in the first half of 2022 increased by 13% from last year – a double digit increase that’s brought housing costs to all-time highs. For too many young workers, this basic desire for a stable and accessible roof over their heads is aspirational.

Inflation is at a 40-year high and pandemic-era cash assistance is long gone. We’re all having to tighten our budgets because we simply can’t afford to spend as much. Average savings are plummeting, with even top earners making $200K salaries increasingly strapped and reporting living paycheck-to-paycheck. Nearly 40% of consumers can’t afford to put any money aside for savings – to say nothing of the quarter of American households with no emergency savings to begin with. As interest rates are creeping up, twenty percent of Americans are scared to check their credit card statements.

This state of deprivation is a fundamental condition of the working class under capitalism. If we’re not in desperate need of cash, we’re less desperate for work. The threats hanging over our heads are why the bosses are able to offer us jobs with low pay, no benefits, and awful workplace conditions and still find workers.

While the capitalists can pile up the money that pours in, ours is immediately eaten up by our basic necessities. Our paycheck starts to disappear as soon as it lands in our account. We even get charged money for not having money – from overdraft fees, to late fees on bills, to fines for broken tail lights.

When we have to work for a wage to get by, we’re not just “selling our labor” as some refer to it in shorthand. We’re selling our skills, our capacity, and the time in our day – the capitalist class has ultimate control over our time and our lives.

“…Labor-power is a commodity which its possessor, the wage-worker, sells to the capitalist. Why does he sell it? It is in order to live…He works that he may keep alive. He does not count the labor itself as a part of his life; it is rather a sacrifice of his life. It is a commodity that he has auctioned off to another.”

This explains why living paycheck to paycheck doesn’t always feel like living at all. So much of our lives revolve around earning money for ourselves by creating wealth for our bosses and then shelling it out just to survive. We’re even pressured to turn our hobbies into “side hustles” so that no time that could have been spent earning money goes “to waste.”

The entire capitalist system is built around making the most money for the bosses. Our very means of survival like food and healthcare are built around this same profit motive. Our unconscionable for-profit healthcare system, run by massive corporations and insurance companies with the sole aim of raking in money, has raised countless young people for whom a surprise infection or dental emergency is their worst nightmare – not because of the pain, but because of the cost.

It’s intolerable, especially now when our day-to-day lives are being impacted by global crises completely out of our control in a fundamentally unstable system. But the same ruling class that created these crises depends on keeping us in this situation.

Between 1979 and 2020, workers’ productivity – meaning the value you’re creating when you’re at work – shot up 68% while compensation increased only 17.5%. This is even more staggering when we think of how much more we’re paying for housing, tuition, and bills since 1979 when a part-time job could get you through college. All that value added to the economy from productivity growth – that’s real existing wealth that has to have gone somewhere. If it didn’t go to workers, where is it? Sitting in the pockets of the top 1% in the form of executive salaries and shareholder returns.

There are ways working people can fight to redistribute the wealth we created in the first place back into broader society. The housing crisis caused by completely unnecessary and parasitic speculation and profit-seeking can be fought with successful campaigns for rent control and massive public investment in quality public housing.

Winning a Medicare for All system to replace the inhumane for-profit healthcare system in the U.S. would save billions on health insurance premiums and copays for working-class people.

The federal minimum wage is still an abominable $7.25 an hour. We can fight in the workplace to win raises on par with inflation, cost of living adjustments, and with independent working-class politics we can win a minimum wage that reflects a real living wage. These are things we can fight for here and now.

But ultimately, working class people, who built the world and keep it running, need and deserve more than simply what’s required to survive. While we fight for what we need here and now, socialists also fight for a better world. A socialist society built around workers’ democracy would allow a balance between productive work that serves the interests of people and the planet with full respect for individual autonomy and personal and collective enrichment.

This would include measures like a shorter work week, with no loss in pay and benefits, to share out work, the creation of new jobs doing work that benefits society, and productive use of the world’s wealth to provide for people’s basic needs. Work would be an exercise in collective participation based in workplace democracy, not a question of selling your time to the highest bidder under duress.

The alternative is the working class and the environment continuing to get fleeced. It’s a continuation of a system where there are millions of empty houses and apartments but you can’t have one, where there’s enormous work to be done converting to renewable energy but millions are unemployed, and where we produce enough food to feed the planet but you can’t afford it. In the end, it’s not about not you versus your bank account, but us versus them and the system that works against us.