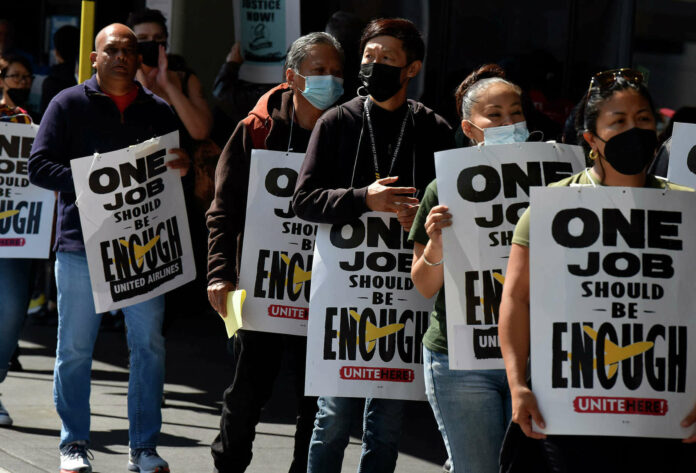 Punitive rents, spiraling inflation, and escalating inequality led to a 99.7% vote to strike by baristas, bartenders, and cooks working at San Francisco Airport (SFO). The picket signs as they began their all-out strike on September 26 said it all: “One Job Should Be Enough!”

The thousand unionized workers striking SFO restaurants have not had a raise in three years. Their average wage of $17/hour may be okay in some parts of the U.S., but in San Francisco where rents average $3,400 a month, these wages are way below poverty levels. Most workers’ hourly pay doesn’t even afford them a sandwich or burger at their workplace, as the Hotel and Restaurant Employees’ union (UNITE HERE) Local 2’s social media campaign with half a million views has highlighted.

According to a Cornell University study, these workers are a part of an 82% increase in the number of strikes this year over this time last year. Workers are exhausted from the “flexibility” bosses are demanding. They are tired of working extra shifts. And they are doubly-done with not being able to pay their bills. And then inflation came along and made everything worse. One SFO striker said she sometimes sleeps in her car to save gas money in between shifts. This is no way to live.

While the union won workers pensions and health benefits, something almost unheard of in hospitality jobs, the union should never have agreed to no raises in the 2019 contract which has seen wages frozen for three years. After nine months of negotiations with employers, the workers just had enough.

On top of this, on Tuesday September 27, Southwest and United flight attendants organized informational picketing at 21 airports, highlighting the generalized need for coordinated strike action across the airline industry which has raked in billions of dollars in profits.

On Friday September 16, ahead of the strike, union members occupied and shut down the road around Terminal 3 in an act of civil disobedience to show they were serious about this fight. 41 workers were arrested, with the leader of the California Federation of Labor Lorena Gonzalez supporting on the sidelines. But we need the leader of the two million unionized workers to do more than make publicity visits. San Francisco Airport should be completely shut down by sympathy strikes of other airport workers alongside mass civil disobedience. Such an action would amplify the need for other workers to get organized right now. People want to fight, but where is the leadership?

At the recent Amalgamated Transit Union’s (ATU) international convention, the delegates voted unanimously for a motion for Cost of Living Allowance plus One Percent for all contracts. This was put forward by Socialist Alternative members in the ATU. This policy, if enacted broadly, would mean all workers would be getting 8-9% raises this year and keep ahead of the inflation cyclone that is destroying workers’ living standards.

The courageous, fighting San Francisco Airport fast food and restaurant workers deserve a break. They deserve to only have to work one job and they deserve a raise that will keep ahead of inflation.