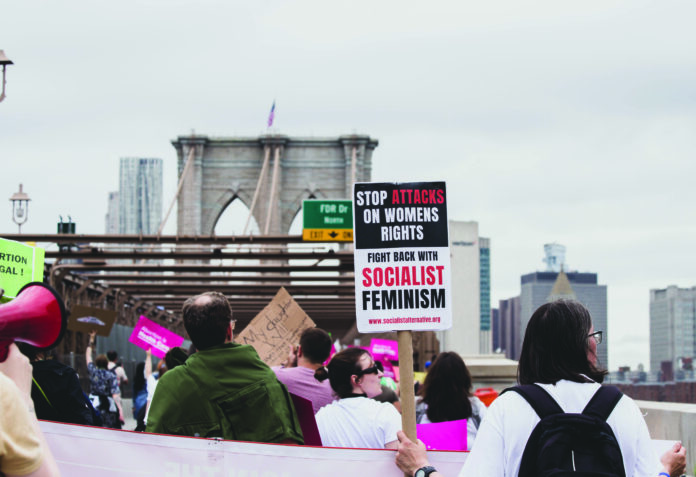 The unelected right-wingers on the Supreme Court have dealt a major blow to women’s and LGBTQ people’s rights with the Dobbs decision. Abortion is now banned in multiple states, likely with more to come, which is a horrific state of affairs for the millions of women, girls, and LGBTQ people who can become pregnant in those states. The financial burden of traveling out of state to obtain abortion services means that working class and poor people will be most severely impacted by abortion bans, and may be forced to take illegal measures to access abortion, carry unwanted pregnancies to term, or potentially take desperate measures that can threaten their health and lives.

Researchers at University of California have shown that more women will be driven out of the workplace by a lack of access to abortion, impacting their financial security for, in many cases, the rest of their lives. The basic social programs like free healthcare, affordable high-quality childcare and paid parental leave that’s needed to start or grow a family with stability aren’t the norm in the U.S. Under current conditions, the Dobbs decision will play a significant role in pushing more women into poverty. More women will die because of Dobbs. Despite the U.S. being the richest country in the history of humanity, the rate of maternal mortality is two to five times that of other high-income countries, and the rate of Black women dying is nearly three times that of white women.

Positively, marches and actions took place in cities across the country to oppose the Dobbs ruling, despite the shameful abdication of the liberal feminist women’s organizations in not leading an organized mass response.

The Dobbs decision represents a massive failure of liberal feminism, a brand of feminism defined by diversifying the ruling class. These ideas, which could also be described as “girlboss” feminism, can never mean true equality for women, all it can guarantee are the rights of some women to oppress others.

While ruling class figures like Kamala Harris are celebrated for achieving “firsts,” liberal feminist organizations – and the Democratic Party establishment with whom they are tightly linked – have stood by with virtually no response to the ending of federal protection for abortion rights.

For years, the central task of liberal feminist organizations like National Organization for Women and Planned Parenthood Action Fund has been to safeguard abortion rights. These organizations’ key political strategy was to support Democratic party candidates who were pro-choice, even if those candidates were anti-worker in a whole host of other ways. Now the vote-blue strategy has been exposed as a disaster.

The needs of working class women and LGBTQ people demands an entirely new kind of feminism.

As if the right-wing attack on the material conditions of women’s lives were not enough, an ugly backlash against #MeToo is playing out in online popular culture. Misogynists like Johnny Depp and Andrew Tate are enjoying mass popularity, as evidenced by millions of social media views for Tate’s videos aimed at young men on how to control and abuse your girlfriend, and the outpouring of support for Depp in his legal assault on Amber Heard.

At the same time, today’s youth have shown that they are ready to fight back against gender-based violence in a wave of high school and college student protests against campus sexual harassment and sexual assault. But it will take a much larger movement that wins clear victories to decisively push back on the disgustingly reactionary and divisive misogynistic ideas that are being mass marketed to a generation of young people.

Women are being attacked on multiple fronts at the same time that women and LGBTQ people have shown that they are prepared to move into struggle against discrimination, injustice, and oppression.

The stage is set for a new feminist movement to come onto the scene, but what kind of movement do we need to not only reverse the right wing attack on abortion rights, but go further and win a broader program of demands around gender violence and true reproductive justice?

The bankruptcy of liberal feminism, with its narrow appeal for equal opportunities for upper class women, and its abysmal record of failure at safeguarding abortion is now laid bare. We need a socialist feminist movement that fights for a program of demands that is focused on the needs of working class women – free abortion as part of a Medicare-For-All type system that also provides gender-affirming health care, as well as paid parental leave, affordable childcare, affordable housing, and more. In contrast to the failed liberal feminist strategy of backing corporate Democrats, a socialist feminist movement will need to take up working class methods of struggle: street protests, walkouts, direct action and strikes, as well as electoral strategies that are independent of the Democratic party establishment.

Unlike liberal feminism, which has no real objection to capitalist exploitation and oppression – other than the lack of opportunities for women at the highest levels of society – socialist feminism has at its heart a transformative vision of a socialist society democratically run by working people for the benefit of everyone. It is on this basis that sexism and other forms of oppression will become relics of the past.