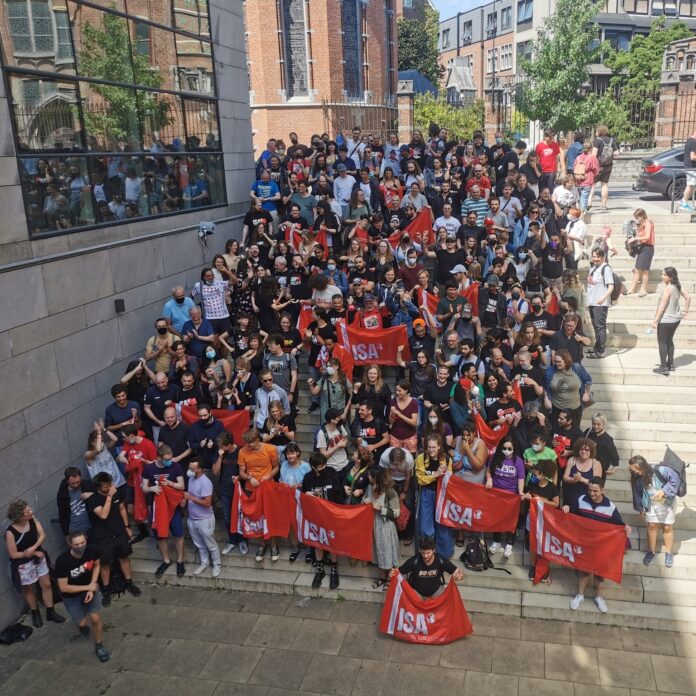 For millions of people, just reading a few daily news headlines is enough to put you in a bad mood, or worse yet, a feeling of existential dread and sense of helplessness. I’ve definitely felt this despondency scrolling through my news feed. But I’ve also been able to combat it, replacing helplessness and isolation with a sense of direction and solidarity.

Last month, I was one of 250 Marxists who gathered in Leuven, Belgium for the first International Socialist Alternative Cadre School. We had hundreds of discussions about the crises facing the world working class, and through these discussions I felt more and more confident that we’re up to the task of fighting for a better world. This is primarily thanks to the fact we are bound together by an international organization whose strength is greater than the sum of its parts.

The necessity of the school stemmed from the perspective that the new era of capitalism we are entering will feature compounding crises, presenting both opportunities and dangers for revolutionary socialists, and requiring training of a new layer of committed activists capable of navigating the twists and turns in the class struggle. ISA also takes into account that although specific conditions and features may vary by region or country, they are interconnected by capitalism’s global nature.

As a response, socialists must organize and discuss across borders to form accurate analyses on how best to fight back against the system. Socialists from over two dozen countries on every continent made the journey to Belgium, including many from the  U.S. Activists from some countries were blocked from attending by sanctions, COVID, and various other restrictions, a reminder that capitalism will oppose movements of working people every step of the way, as many socialists before have encountered.

The week kicked off with a plenary discussion on the world situation, looking at the macro processes in society – including the underlying economic instability, climate crises, inter-imperialist rivalries, the growth of the right, and war – alongside the interplay between them. This kicked the school off on a firm basis. Delegates then made contributions to the discussion relating key features in their home region to these processes, how phenomena such as deglobalization and political polarization manifest there.

A major takeaway from the discussion was that the distance between national and global processes is short, and that events in specific countries often show clear trends and connections to overarching global crises. This flowed into the following day of the school, where smaller discussions focused on these global trends and their features – the  struggle for abortion rights, the coming recession and stagflation, the growing threat of the far right, and the climate movement among others.

The second day finished with all delegates again gathering for a plenary, this time delving in to how the myriad of crises compound together driving toward a new cold war revolving around the rival imperialism between the U.S. and China, most visibly expressed by the hot war in Ukraine and flowing from the wider transition to deglobalization and nationalist protectionism.

If the first two days were forming perspectives and sharing reports on current processes/events, the following day was dedicated to learning the lessons of revolutions in the past and around the world today all aimed at answering the overarching question put to socialists: “what to do next?”

Part of the response to that question was posed in the following day’s commissions – geared toward discussing perspectives for long-term work in our workplaces and classrooms. Delegates were encouraged to orient to commissions aligned with their workplace or school- discussing strategy and identifying trends.

Finally, the last days of the cadre school took up a focus on building the revolutionary party, with the understanding that building our sections, with a concrete orientation toward international cohesion, will be crucial to our ability to shape events in battles ahead against capitalism. In Mexico, from having only one member in 2019, we today have a young, vibrant and growing section, with a total of three regularly meeting branches in different cities.

These workshops focused on developing skills to build the organization – producing a regular paper and publications, best practices in consolidation of new members, sharing perspectives for intervening successfully in the women’s movement, developing consistent youth work, and refining revolutionary finance – to name a few.

The cadre school was an intense and immersive week full of discussion. For many, attending was like returning to the classroom for the first time in many years. But that adjustment and the flurry of travel before and after were well worth the price for the perspectives shared, rich lessons learned, and connections made.

In a world where the ruling class wants working people to stay home and atomized, believing that nothing can change, it was powerful to engage in energetic discussion, both formal and informal, with working class fighters who together reject the pessimism of the ruling-class, and instead replace it with a revolutionary optimism that a better world is possible and an excitement in answering the question “what to do next?”