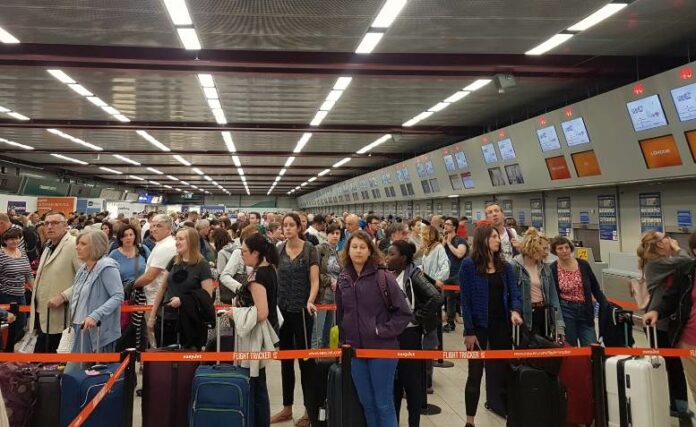 As international and domestic flyers experience constant flight delays, cancellations, lost luggage, and overall chaos this summer, the airline industry has become the poster child for capitalism’s abysmal response to the COVID pandemic.

In 2019, major U.S. airlines lavished enormous compensation packages on their executives; the heads of American Airlines, Delta, and United collectively received $58.3 million in salaries and bonuses, which doesn’t even include the value of company-issued stock. To inflate these compensation packages, the airlines poured enormous stores of cash into stock buybacks to boost share price, which in turn boosted the wealth of their executive suite.

Bloomberg reported that the six largest airlines in the U.S. spent 96% of cash flow on stock buybacks (meaning, buying their own stock to artificially inflate their company’s value) over the last 10 years; meanwhile, the last 20 years saw US airlines declare bankruptcy 66 times. Airlines poured cash into the financial casino of the stock market for years while making air travel objectively worse: seats shrank, flights became overbooked, and fees stacked onto once-complimentary services.

This merciless profit-mongering set the stage for crisis. When the pandemic temporarily shut down air travel in March 2020, airlines had little to no savings to fall back on. Their stock buybacks backfired as share prices dropped through the floor. Rather than return their exorbitant compensation perks, airline executives threatened (with crocodile tears) to fire tens of thousands of workers if execs and investors didn’t get federal funds. As part of the COVID stimulus package, U.S. airlines collectively received $60 billion in bailout funds and another $15 billion specifically for “payroll assistance” to keep workers employed.

However, airlines were given a loophole: they were only forbidden from firing workers for 6 months. After 6 months, they ransomed another $25 billion out of Congress by threatening to fire thousands of workers again.

The 6-month loophole meant workers still lost their jobs, even while airlines collected massive checks for promising to keep them employed. About 400,000 aviation workers in the U.S. were fired or furloughed, Bloomberg reported in 2020.

Stoppage of air travel didn’t last forever. As vaccines rolled out, countries opened borders to international travelers. Heads of state insisted things could return to normal, despite rising COVID cases and the proliferation of new strains and variants. While travel has not returned to pre-COVID levels, demand has climbed sharply in late 2021 and 2022 — another event for which airline executives left workers unprepared.

The loss of 2.3 million workers meant there weren’t enough staff to handle the growing number of travelers over the last year. Now security checkpoints process fewer people per hour, lines grow longer, and staff members are overworked. Airlines are canceling thousands of flights daily, and countless travelers have reported grueling flight delays, cancellations, and missed connections over the last year. Even travel to a relatively close destination is prone to delays of several hours.

As we’ve written before, the end of neoliberalism has led to a period of de-globalization and inter-imperialist conflict. To operate effectively, the airline industry requires international cooperation, but we have entered a period marked by intensifying international discord and protectionism.

Each of these airlines posted record sales for the quarter despite serving far fewer passengers than in 2019. The profits collected by airline executives aren’t the result of creating better, more functional air travel; they’re the result of price hikes. And those profits were earned, ultimately, by an increasingly overworked and understaffed army of skilled aviation workers.

Aviation Workers Begin to Rise Up

European airline staff have gone on strike this week to address salary concessions made during COVID. In the U.S., Delta Airlines staff recently demonstrated to demand higher pay and more staffing, and are on the verge of winning the first union at the corporation. Aviation workers will need to organize further in order to win higher wages and repair the dysfunction created by years of short-sighted profit-seeking. However, one-day demonstrations won’t cut it; unions will need to utilize every weapon at their disposal to win higher pay and more staff, including strike action. Unions need to take up, and in some places ramp up, campaigns to unionize the vast number of aviation workers who are currently not unionized.

Like post offices or libraries, air travel is a vital public service. Yet air travel is privately owned, subject to the needs and whims of airline owners and investors. To create a rational airline industry that offers routes and flights based on need, we need to take the aviation industry into public ownership and put it under the democratic control of aviation workers. Democratic control of the aviation industry would leverage the collective experience, wisdom, and skills of millions of workers worldwide to make air travel more reliable and affordable for everyone.