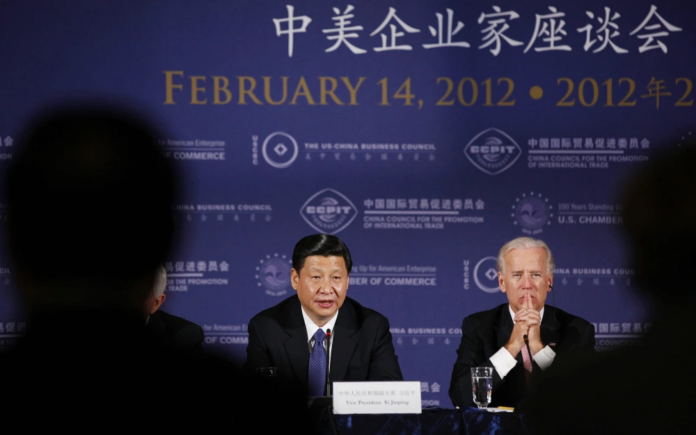 Article after article in the mainstream corporate media in recent weeks has stated that the war in Ukraine has accelerated a radical realignment in the world economy that is termed “deglobalization.”

Martin Wolf, the chief economics editor of the Financial Times stated recently that “…the emergence of two blocs with deep splits between them is likely, as is an accelerating reversal of globalization and sacrifice of business interests to geopolitics.” (FT, March 16)

Larry Fink, CEO of BlackRock the world’s largest “asset manager,” was even more blunt: “The Russian invasion of Ukraine has put an end to the globalization we have experienced over the past three decades.”

The war in Ukraine is indeed having massive impacts on the world economy with major implications for the future. But to understand deglobalization we have to go further back.

Capitalism since its birth as a social system has shown a tendency to bring all parts of the world into a global market with a developed division of labor. This tendency which Karl Marx described in the 19th century can be broadly termed “globalization.”

However, capitalism’s drive to create a world market and a world economy run up against the limits of the nation state. It is the political form that the capitalist class cannot escape as it is the means through which they dominate society ideologically and if necessary with force. Marx and his collaborator Friedrich Engels identified the nation state as the key obstacle to capitalism’s ability to further develop human society’s productive forces in a harmonious way.

In the late 19th century there was a period marked by a high degree of globalization including lower tariffs on trade, ease of travel, etc. This was also a period of steady economic growth. But this was not sustainable and by the beginning of the 20th century it was replaced by increasing competition between the key imperialist countries which culminated in World War I. After WWI, and especially in the 1930s there was intense deglobalization as inter-imperialist conflict continued marked by a very high degree of protectionism (high tariffs). This did not begin to change until the long period of growth after World War II.

The neoliberal era that began in the early 1980s and that we are now exiting was also characterized, like the late 19th century, by an exceptional level of globalization. Barriers to trade and the movement of capital were systematically reduced through extensive trade deals like NAFTA. Supply chains became longer, more complex, and more integrated as corporations sought to reduce the costs of production to a minimum. It was an era of low inflation, low interest rates, and cheap imports. While many poor countries experienced partial industrialization to service the global market, rich countries like the U.S. experienced a partial de-industrialization. The corporate elite made incredible profits and inequality increased to levels not seen in a century.

The Crisis of Neoliberalism

The current retreat from globalization is rooted in the crisis of capitalism at the end of the neoliberal era. This was first expressed in the deep global recession in 2007-8. Despite amassing huge wealth, the capitalists were increasingly unable to make profit from investing in expanding production. Capital was instead invested in the global casino of the financial markets leading to a series of speculative bubbles that burst dramatically and brought the real economy down with it.

As always it was working people who were made to pay with mass unemployment, millions of foreclosures and endless cuts to social spending. The result was that neoliberalism became associated with savage austerity and was increasingly opposed by ordinary people around the world.

During the following decade the steam went out of globalization. Between 2008 and 2019 world trade relative to global GDP fell by about five percentage points according to the Economist.

It was also during this decade that the conflicting interests of U.S. imperialism and rising Chinese imperialism began to point towards a new Cold War. Donald Trump levied extensive tariffs against Chinese goods but tariffs and protectionism were also rising globally. The U.S. and China from being drivers of globalization became drivers of deglobalization. FDI flows between the U.S. and China were $30 billion per year five years ago. Now they are down to $5 billion. The U.S. banned Chinese telecommunications giant Huawei from government contracts and then pushed hard for its “allies” to keep Huawei out of the construction of 5G networks.

The new Cold War and deglobalization have certainly been accelerated by the pandemic and now the war in Ukraine. The pandemic dramatically showed the vulnerabilities of vast global supply chains. Both the Chinese and U.S. governments are seeking to “reshore” strategic sectors of production like semiconductors. The decoupling of the U.S. and Chinese economies is clearly underway. There is a massive military buildup underway in the Western Pacific pointing towards conflict over Taiwan.

The world economy is dividing increasingly into two blocs centered on the U.S. and China. The European Union and Japan are increasingly pulled behind the U.S. while Russia and China have formed a very close alliance.

The war in Ukraine brought everything to a head. We stand with the people of Ukraine and demand that Russia withdraw all its forces but we also oppose the interests of all imperialist powers and the slide towards an even more dangerous global conflict. We oppose the Western sanctions that are hitting working people in Russia hardest and that are themselves an act of war.

The radical move to push Russia out of the world financial system is effectively a fast paced decoupling of the world’s 11th biggest economy from the U.S./EU/Japan economic sphere. It points towards Russia and China creating their own arrangements outside the “global institutions” like the World Trade Organization, World Bank, etc. All nations are increasingly being asked to “take a side” in a conflict which is described as being between “democracy and autocracy” but is really a clash between imperialist interests like the clash between Britain and Germany before World War I.

This is truly the end of globalization as we have known it for the past 30 years. Of course it doesn’t mean the end of trade or an international division of labor. But it points to a serious reorganization where the national economy plays a far bigger role than before.

Some may welcome the decline of globalization which certainly was linked to a ruthless corporate agenda that rode roughshod over the rights of workers, indigenous people, and contributed massively to climate change, all in the name of creating an ever more “free” market. However what will replace it will be even worse as long as capitalism exists. We now see the reassertion of reactionary nationalism, military buildup and growing inflation. As a result of the war in Ukraine and climate disasters, the world now faces the biggest food crisis since World War II.

Instead of “deglobalization” or a return to neoliberal globalization, we need an international working class alternative that points to achieving the promise of a world economy based on a rational democratic plan.