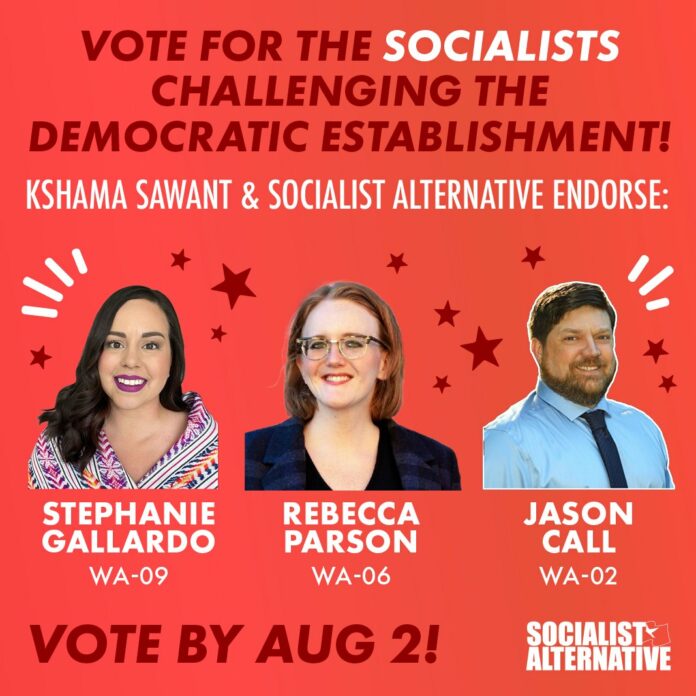 In the wake of the historic defeat of Roe v. Wade and total failure of the Democrats to defend abortion rights, working people are increasingly recognizing we need an alternative. The Biden administration and Democratic leadership have failed to deliver on any of the promises they made to working people, from a federal $15/hr minimum wage to canceling student debt to meaningful action on climate change. This unwillingness to fight for working people has allowed the far right to roll back progressive gains by decades and has opened the space for the return of Trump in 2024 or another right-wing figure in the White House.

In Washington State, three Democratic Socialists of America (DSA) candidates for Congress — Stephanie Gallardo, Rebecca Parson, and Jason Call — are challenging members of the Democratic Party establishment in the November midterms. Running on a joint platform calling for Medicare for All, dramatically raising the federal minimum wage, and taxing the rich to fund affordable housing and public education (among other things), their campaigns speak to the deep frustrations of working class voters facing historic inflation, low wages, and deeply unaffordable housing and healthcare.

In seeking to represent the interests of working people, these democratic socialist candidates are correctly identifying themselves as opponents of the Democratic party establishment, including being willing to publicly clash with party leaders. This is an important step forward and should be adopted by all DSA candidates and elected officials. It’s also very positive that they refuse to take corporate money and are campaigning on a platform that could make a real difference to working people.

Unfortunately these three candidates also stop short of genuine political independence, all choosing to run within the same Democratic Party whose leadership they are challenging and which has fundamentally failed working people.

Despite this serious mistake, these campaigns nonetheless represent a left, working-class challenge which has gained the support of a section of working-class and young people looking to fight back. Kshama Sawant and Socialist Alternative endorse Stephanie Gallardo, Rebecca Parson, and Jason Call and urge Washington voters to support them in the August 2nd primary and November midterm elections.

We also urge all three of these candidates to break with the Democratic Party and run as independent socialist candidates, as a step toward what is urgently needed — a new party for working people and youth. It appears all three are campaigning as Democrats on a pragmatic basis, hoping it will make it easier to get elected. Unfortunately, there are many strings attached to running within the Democratic Party and the pressures to be “pragmatic” will grow dramatically if they succeed in getting elected.

Stephanie Gallardo, a member of the National Education Association, is running against 26-year Democratic incumbent Adam Smith. Smith is one of Congress’s biggest recipients of donations from weapons manufacturers and has worked tirelessly to ramp up military spending throughout his career. Gallardo has used her campaign to criticize Smith and other Democrats for supporting increased military spending since the start of the war in Ukraine, and she publicly refuses to take donations from corporate PACs and weapons manufacturers. While Gallardo has correctly called out Pramila Jayapal before, who has formed an alliance with Biden and Pelosi, she has also expressed eagerness to work with her on opposing military spending increases if elected. If Gallardo is elected, to win any part of the platform she is campaigning on she will need her eyes wide open about the role of Jayapal and other gatekeepers in the Democratic Party. Jayapal has refused to fight for Medicare for All, a $15 minimum wage, and other major reforms she has claimed to support, while providing left cover to a Biden administration that has disastrously failed working people.

Rebecca Parson is running against Derek Kilmer, a 9-year Democratic incumbent heavily backed by the financial and real estate lobbies. Parson has publicly pledged not to take a cent of corporate PAC or lobbyist money, and told Socialist Alternative that if elected she intends to follow Kshama Sawant’s example in accepting only the average workers’ wage and donating the rest of her salary as an elected official to social movements. Crucially, Parson also points to the need for organized mass movements including strikes and street protests to win the legislation she would bring forward in Washington, D.C. However, her decision to run as a Democrat points towards an unwillingness to fully break with the establishment, and if elected the pressure exerted by Democratic leaders not to mobilize working people would be enormous.

Jason Call is challenging 20-year incumbent Rick Larsen, a corporate Democrat who fights on behalf of the insurance industry against Medicare for All in Congress, failed to support the demand for marriage equality, and went to bat for the Keystone XL pipeline. Call’s campaign, like the others, correctly takes up working class issues and points the finger straight at the failures of the Democratic party leadership. But he sends mixed messages when he describes his years as a local elected Democratic party official as productive ones. He gives the example of lobbying for and winning language highlighting housing justice in the State party constitution, which he clearly intends to inspire confidence in his strategy to reform the party from within. This example of a minor symbolic victory after years of effort in the midst of a national housing crisis instead shows the fatal flaw in the strategy of trying to reform the Democratic Party.

DSA’s recent stagnation after years of explosive growth is at least in part the result of the organization not giving a clear lead on how to advance popular socialist demands like Medicare for All or a federal $15 minimum wage past the roadblock of the Democratic Party establishment. These and other DSA candidates have the opportunity to help chart the urgently needed path forward for independent working class politics and struggle outside the Democratic Party, as Kshama Sawant and Socialist Alternative have done in Seattle throughout Sawant’s now four consecutive terms as an open and independent socialist.

If elected, these candidates will need to base themselves on building fighting mass movements in order to advance their agendas, which is completely unacceptable to the Democratic establishment. They will ultimately be forced to choose a side. If they choose working people, every part of the Democratic Party machinery will be mobilized to oppose them, as it has against Sawant in Seattle. But by basing herself on working class movements, Sawant has also won four elections despite massive corporate opposition, and won historic victories like the $15 minimum wage, landmark renters rights, and the Amazon Tax.

The primary is coming up on August 2nd and ballots will be mailed out soon. If you live in Washington’s 2nd, 6th, and 9th Congressional Districts, you have an opportunity to strike a blow against the Democratic Party establishment by getting in your vote for Jason Call, Rebecca Parson, or Stephanie Gallardo, and making sure your friends and neighbors do the same.