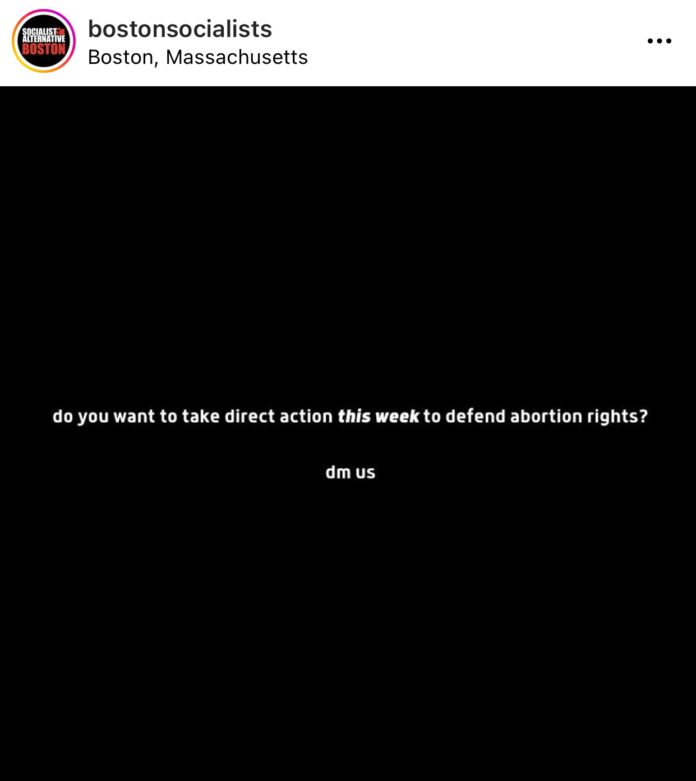 Emilia Morgan is a member of Boston Socialist Alternative.

Across all our social media, we posted a necessarily cryptic message: “interested in engaging in a direct action? DM us.” Within hours we generated hundreds of likes and hundreds of messages. The mood was clear – people were interested and willing to engage in escalating action in the fight for abortion rights.

On Friday, July 1, Boston Socialist Alternative led a rally inside the federal building demanding that Biden and the Democrats stand up and fight for abortion rights. We demanded that Biden direct the Department of Health and Human Services to open abortion clinics on federal land and make abortion pills accessible through the national mail system, and that he pulls no punches in – alongside Chuck Schumer and Nancy Pelosi – forcing Congress to repeal the Hyde amendment, tax the billionaires, and pass Medicare for All that includes full reproductive care and gender-affirming care.

Over 40 people showed up to the action and the energy was electric. We walked into the building, group by group, with our signs folded into our backpacks and our chant sheets in our back pockets. Once everyone was through the metal detectors, we then pulled out our signs, took out our phones to start streaming, and began chanting through the halls. For 20 minutes, we marched through the hallways, with people giving impromptu speeches calling on the Democrats to use their majorities in Congress and control of the White House to pass needed protections for abortion rights. People peered out of their offices, curious to see what was going on, but the police blocked them. We finished our action with a rally outside the federal building, emphasizing the need for unions to fight for abortion rights, and calling on other socialist organizations to mobilize their members and get involved in building a mass movement.

It is clear that Biden and the Democrats will not take the necessary steps to fully protect abortion rights unless under the threat of a genuine mass movement. Mass anger at their inaction forced Biden to issue a series of executive orders to protect abortion rights, though the orders are vague and do not go nearly far enough.

The Democrats have had 50 years to codify Roe and haven’t, and then they cynically used the Supreme Court ruling to fundraise for the midterms. This is while the majority of Americans support abortion rights. We rallied inside the Federal building to make the statement that Biden and the Democrats have no more excuses for not going all out for abortion rights for all.

Friday’s action was an important, though small, demonstration of what types of actions we need to take to pressure Biden to take meaningful steps in terms of protecting abortion rights. Rallies and protests are a positive first step, but to turn the heat up on the Democrats, it will take more than just that. Direct action nationally ahead of the midterms will be necessary if we want to fully win back abortion rights for all, with a more comprehensive medical system, and further protections for women, and the LGBTQ community.

We need a mass movement, with clear cohesive demands, engaging in the necessary steps not only to win back abortion rights but for a new political party as well. The Democrats demonstrate time again that when it comes to life and death issues for the working class, like abortion rights, they would rather give vague promises and platitudes than fight for the things we need. A new political party by and for working people needs to be established to ensure we are never again put in a situation like this, where rights we have fought for and won 50 years ago are overturned because of lack of action. This new party must be free from corporate pressure and interests, where politicians are fully accountable to the working class, and it must be a party that is willing to fight tooth and nail against the capitalist system.