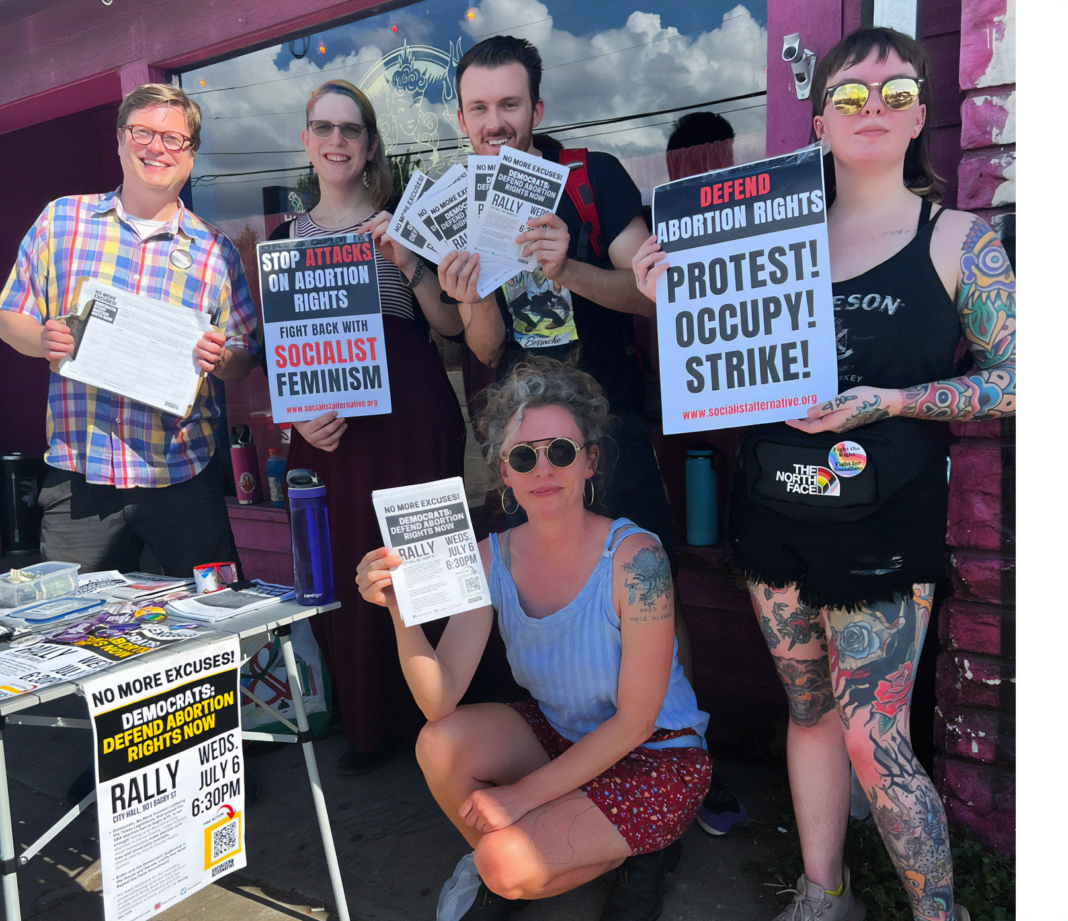 In front of a crowd of thousands of people rallying against the Supreme Court’s leaked opinion to dismantle federal abortion access back in May, Socialist Alternative Houston announced a community Action Assembly as a tool to organize the movement to defend Roe v Wade. Its purpose was to bring the multigender, multiracial movement in Houston together to discuss demands for the next phase. However, as the decision to overturn Roe actually came down, and draconian anti-abortion laws went into effect in Texas and around the country, the need for such an assembly to discuss further action became even greater.

From Houston to the White House, the Democratic leadership and President Biden have the power right now to decriminalize abortion, codify Roe, and repeal the Hyde Amendment. With majority support for legal abortion and national abortion access, this is entirely a question of political will!

We expected high turnout for our Action Assembly after a video of young people including Socialist Alternative Houston members confronting gubernatorial candidate Beto O’Rourke with the chant “Voting Blue is Not Enough, Democrats We Call Your Bluff!” went viral and prevented him from stealing the mic at an abortion rights demonstration immediately following the fall of Roe. There’s also a clear mood to fight back against the right wing in Texas more broadly, especially against attacks on trans youth.

Over 150 people congregated into the meeting space, filling every seat, lining the walls, even sitting on the floor. Instead of turning away an additional 40 people unable to fit into the original space, Socialist Alternative members quickly reacted and organized a second meeting in the parking lot. The crowd, united by their shared fear for the future of abortion access in Texas and beyond, discussed and organized for a rally at City Hall to escalate the struggle.

The Republican Party is emboldened nationally but especially in states like Texas, and we need elected Democrats to fight back. Our proposals going into the City Hall rally are to demand that Houston Mayor Sylvester Turner and the City Council “decriminalize” abortion by refusing to fund police investigations involving abortion. We also demand that District Attorney Kim Ogg refuse to prosecute abortion cases. We demand that Harris County Executive Lina Hidalgo must immediately make abortion pills free, universally available, distributed by the Harris County Health System, and violating the Texas abortion ban if necessary. All of these elected officials are Democrats.

A common theme was evident at the Action Assembly: people are hungry for community organizing to build a movement to make abortion legal, accessible, and free, rather than trying to fill in the need for reproductive care on our own. In particular, it’s clear that no amount of GoFundMe campaigns or donated funds can scale up to meet the need for guaranteed safe, legal healthcare, including access to abortion.

“The fact that these donated funds exist in the first place is a testament to the deep solidarity working people have for each other,” Socialist Alternative member Sammee said in opening remarks to the assembly, to thunderous applause.

In what is now a post-Roe United States, people are increasingly putting demands on the Democratic Party to finally fulfill campaign promises – including the campaign promise Joe Biden made to codify Roe. The Democrats have a clear path to striking back against this political attack on working people, women, and queer people, but without real action from working people forcing their hand, they’ll fall short as usual.

If the action assembly displayed anything it showed that people are ready to act. We have the motivation, we have the numbers. As many of those who attended our assembly take the next steps in the movement, we need to link the struggle for reproductive justice to the struggle for an independent, working class party that actually fights for our needs.” With “friends” like the Democrats, who talk about abortion access but refuse to mobilize a fight against the right, it’s an uphill battle. They have no more excuses not to fight, and we need to get on the march to build the movement necessary to win.