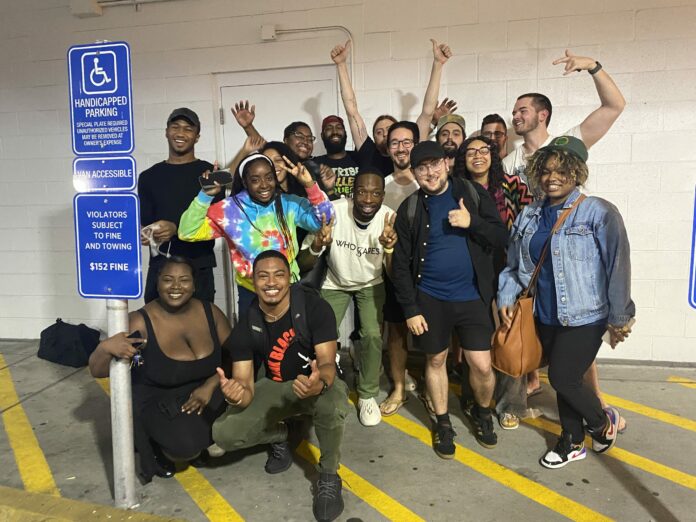 *Socialist Alternative is building a branch in Baltimore, MD. If you live in the Baltimore area, apply to join at https://www.socialistalternative.org/join/

The current groundswell in the labor movement surged again this past weekend, with retail workers forming a union at an Apple store in Towson, Maryland – the first of the tech behemoth’s locations to unionize. After 4 days of in-person voting, workers won decisively with 65 voting for and just 33 against. These workers, calling themselves the Apple Coalition of Organized Retail Employees (AppleCORE), went public with their intent to unionize on May 3 shortly after another store in Atlanta filed for an election. Two other stores in New York and Kentucky have also announced campaigns but have not yet filed for election.

Much of their reasoning was related to the pandemic, with morale dropping and Apple unilaterally changing its COVID protocols without worker input. But their discontent has deeper roots – workers have described insufficient and inequitable pay, lackluster safety precautions, and abusive customers on top of an already demanding job. Meanwhile, Apple has reported record revenues and billions in profit over the pandemic. Apple workers, who generate these profits for executives like Tim Cook, are fighting back by forming a union.

We are at a potential turning point in the labor movement. There has been a deepening crisis since the 2008 recession, and inflation is at a 40-year high. The pandemic has decimated workers, while billionaires have doubled their wealth. Despite this, the Democratic Party has failed to pull together an adequate response to economic hardships and attacks from a growing right-wing, walking back basic campaign promises that would help workers, like a modest $15 minimum wage and debt relief. Labor leadership has failed to mobilize a response, preferring instead to negotiate behind the scenes with corporate bosses and Democratic Party politicians. Even so, workers are looking to unions as a way to fight back – either in the form of the rank-and-file led “Striketober,” by launching new union drives affiliated with existing unions like Starbucks Workers United, or by forming new structures altogether like the Amazon Labor Union.

It will be crucial for workers and socialists alike to stay informed about these developments, and to help advance these unionization efforts in critical industries. Apple has more than 270 stores nationwide, and tens of thousands of employees. The company inhabits a unique space, straddling the tech, manufacturing, and retail industries. This provides an opportunity not only to engage in struggle on a huge scale, but also to connect existing movements across companies like Amazon, Starbucks, Target, and Trader Joe’s through joint solidarity rallies and national days of action. Setting out to eventually coordinate contract expiration dates to allow collective action across the retail sector as a whole would open the door for a significant show of power across the industry, concretizing these union victories and advancing the struggle for their own contracts and the continued movement for unionization among other service workers.

After a successful union election like the one in Maryland, it would be a mistake to slow down – newly formed unions need to turn immediately to fighting for a first contract and forming strong connections with other fighting organizations. This is crucial when the odds are stacked against workers. Structures like the National Labor Relations Board (NLRB) are propped up as a neutral party between workers and bosses. In practice, however, the NLRB overwhelmingly favors bosses by delaying or denying justice for workers, or holding workplace battles hostage in the realm of legal proceedings and bureaucracy. Corporations can count on the slow legal process to buy themselves time for further union busting. It is clear that these issues will not be solved by courts, instead they must take advantage of the power of workers to drive progress.

As we have seen recently with Amazon and Starbucks, however, this will not be an easy task. Corporations are pulling out all the stops and spending millions to protect their “woke” images while opposing unionization of their stores and warehouses with retaliation and fear mongering. Workers will need a strong, decisive, and correct approach to combat this. One of the most effective strategies is to lead with clear demands, which workers can rally around and fight for.

Unfortunately, established unions and their leadership too often shy away from these tangible points, opting instead for conciliatory sentiments like “making the company better” or gaining a “seat at the table.” Broad statements like this can easily be co-opted and undermined by the company, as we have seen in recent history. Apple is already attempting this by reiterating a statement about offering strong compensation and benefits. The company also raised starting wages to $22 per hour to pacify – and cut across – efforts to organize. On the other hand, this shows the power a union can have even before it is won.

In Atlanta, workers were subjected to anti-union presentations, interrogations, and other roadblocks. Apple has hired Littler Mendelson, the same law firm retained by Starbucks to ratchet up their strategy. Starbucks itself used all of these tactics, going further by firing seven workers at a Memphis store this past winter, and the illegal retaliatory firings have only ramped up since. Unfortunately, despite rank and file anger and some scattered solidarity actions, the labor movement’s response to this has been timid. What will be necessary to fight back against retribution is a sustained, unified movement that can defend workers from that blowback, and embolden others to take up the struggle.

The Communications Workers of America in Atlanta, International Association of Machinists in Maryland, and Apple workers assert that the company’s response to union elections is contradictory to its supplier code of conduct and human rights policy – while also pointing out the company’s record of violating federal labor law. But this isn’t new information. Apple has had a history of shirking responsibility for its supply chain, and it’s not helpful to play up these corporation’s talking points at the expense of exposing the reality of their profit-making machine.

In 2010, Apple came under scrutiny when 14 workers employed by Foxconn, Apple’s largest supplier, killed themselves due to mistreatment and poor conditions. Apple responded by publishing supplier standards, but failed to follow through with enforcement. Undercover reports in 2014 revealed excessive hours, mandatory overtime, and overcrowded dormitories. Another report by China Labor Watch in 2019 found that working conditions were still insufficient, wages were not enough to support workers, benefits fell short of legal requirements, and workers were forced to work up to 100 overtime hours a month during peak seasons.

In the U.S., the multinational corporation has also faced unsatisfied workers growing tired of exploitation and poor conditions. Apple workers in the U.S. called for a walkout in 2021 to demand a more respectful workplace, paid sick time, protection against abusive customers, increased COVID safety, and hazard pay. Fifteen workers put together a site for others to share their experiences – two of the lead organizers were fired as a result.

Worker dissatisfaction in the tech industry is not relegated to just one company, though. The Great Resignation of tech workers saw record numbers leave the industry in the spring of 2021. In the summer of 2020, 1,600 Google employees signed a petition to demand the company stop selling software to police. This was done despite 4 employees being fired the previous year for speaking out against Google’s work with Customs and Border Patrol. And in 2019, over 20,000 Google employees walked out to protest sexual harassment. While these demonstrations brought about limited changes, they were accompanied by blowback for organizing workers – reduced hours, demotions, and even firing. To hedge against this and win even more widespread victories, other types of tech workers, like programmers and developers, should be mobilized into the struggle. While in some cases, these jobs might be higher paid than working in a store, these workers also face brutal hours, precarious work, rising rents, student debt, poor benefits, and vicious attacks from the boss when they stand up.

We should not overlook that these workers, despite differences in conditions and wages, have one fundamental thing in common. They are all at the whim of their executives – the same billionaires who multiplied their own wealth while workers have struggled through the pandemic. This fundamental fact connects not only all tech workers, but all laborers across industry and occupation. And as such, we can draw and apply lessons from other fights happening simultaneously in the labor movement.

Learning from Amazon and Starbucks

Since December, more than 250 Starbucks stores have filed for union elections, and 150 have already voted to unionize, though Starbucks is refusing to meet to negotiate a first contract. Workers in multiple cities have been fired for reporting abuse by management after attempting to organize, often for fabricated or exaggerated reasons. Corporate executives were sent to local stores to give anti-union presentations, and if that didn’t work, hours were cut to force organizing workers to find other jobs.

After 8,000 workers at an Amazon warehouse on Staten Island formed the company’s first union, Amazon stepped up its union-busting at another nearby facility. The company paid consultants $2,000 per day to pose as concerned workers, advised its employees to do their own research first (a common right-wing tactic to sow doubt), and placed misinformed workers before captive audience meetings to appeal to others to vote no. Another tactic was to advise workers to “wait and see” how other union struggles play out, to divide-and-conquer.

Knowing what we are up against, the question becomes clear – how do we overcome these tactics? The JFK8 warehouse in Staten Island is a good example, and workers across the industry should take note of its approach.

First, they organized around clear demands – a $30 minimum wage, longer breaks, and an end to Amazon’s archaic time tracking system. Second, they built a democratic, worker-led committee to authentically connect with their co-workers and disprove claims that a union is a third-party. Third, they were not afraid to name the enemy and polarize around the boss. They recognized, correctly, that every gain for the boss is a loss for the workers, and vice versa. Apple workers applying these same methods, along with their numbers and strategic position, could send shockwaves across the entire tech industry.

Organizing the tech and logistics industry would be a massive step forward to build a unified, fighting labor movement. Using these methods – the same methods that were used to win victories for the working class in the 1930s and 1970s – we can go from one isolated victory to winning union representation for all workers. To achieve these results in the current climate, it will be important to learn from the past and apply these lessons to emergent struggles.

Unionizing workers should organize democratically and make clear, concrete demands. They should not be afraid to use escalating actions such as walkouts and strikes to force the company’s hand. They should call on customers and other workers to not cross the picket line. Members of other unions should put forward resolutions to donate to organizing funds for Amazon and Apple, call for rallies, and mobilize their membership to support picket lines when workers go on strike. But as a first step, workers across Apple and the tech industry should follow the lead of these stores, organize for a union, and join the struggle to win rights for all!