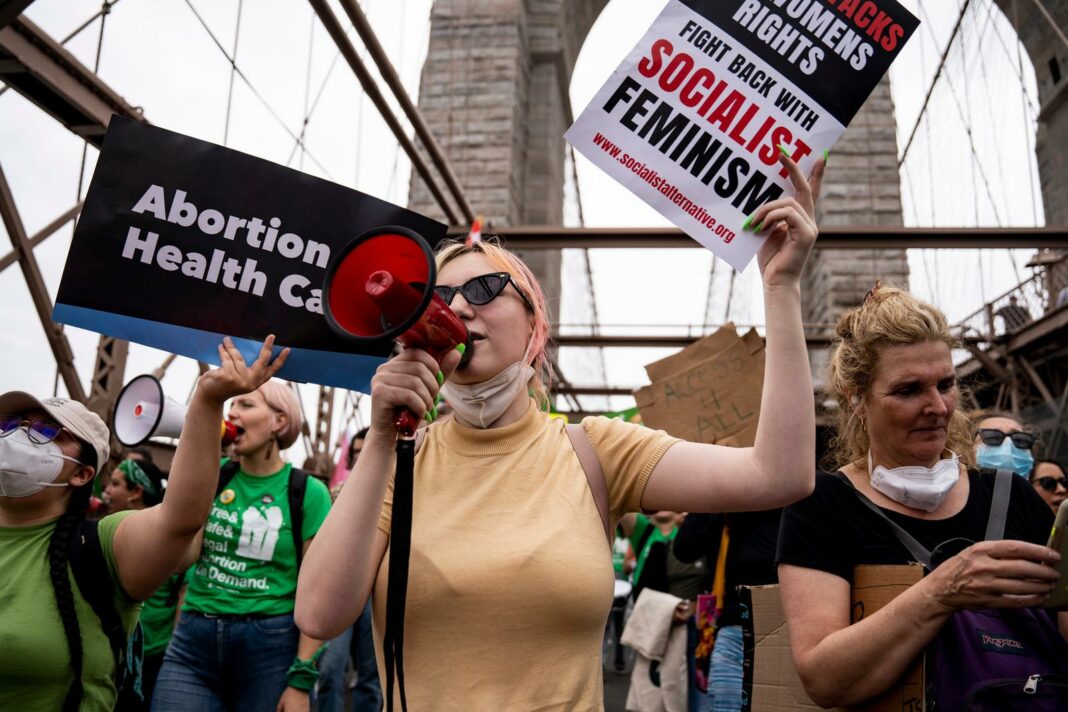 Thousands across the country took to the streets on Saturday, May 14 to defend Roe v Wade. Socialist Alternative branches from every region came out in solidarity with the fight to protect abortion rights against right-wing attacks and to build a socialist feminist movement for free, safe, and legal abortion; free contraception on demand; universal childcare; fully-funded public schools with comprehensive sex ed; and Medicare for All including trans and reproductive healthcare!

But the fight doesn’t end here – we’ll be hosting organizing meetings and Action Assemblies across the country in the coming days and weeks to sustain the fight. Check this page to keep track of local meetings and find Action Assemblies in your area. We need more coordinated protests, walkouts, occupations, and workplace action to stop the threat from the right. That means we need to get organized. No trust in the Democrats who have had 50 years to codify Roe. It’s time for working people and youth to take a stand!

Hundreds of students at five Philadelphia middle and high schools walked out of class on the morning of Friday 5/13, calling for abortion rights as well as fully funded schools with counselors and nurses, comprehensive sex ed and available STI testing, and support for LGBTQ students. The mood of the students’ joint rally was absolutely electric, completely indignant towards the failure of the establishment to prevent this right-wing assault on women and trans people. An endless stream of students came up to the mic to express disgust, and the rally poured into the streets in an impromptu march towards Drexel campus where more students were walking out.

By Saturday morning, 1,500 people filled the north apron of City Hall for a rally co-organized by Women’s March, volunteers, and Socialist Alternative. Many speakers pointed towards the student walkouts as an inspiration for what to do to defend reproductive rights, though others emphasized the need to mainly vote. Instead, Fiona Cavanagh of Socialist Alternative challenged the crowd to “pledge to withhold your support for Democrats until they go all out to defend and codify Roe,” a call supported most by the youngest and most energetic layer of the crowd. Hannah Boroff announced SA’s upcoming action assembly: “An attack on abortion is an attack on all working class people. It’s going to take all of us being out here today, but it’s also all of us staying involved, organized, and talking about what next concrete steps we can take to escalate the struggle!”

In Houston, about 4,000 people protested against the Supreme Court’s attacks on abortion rights. While Democratic politicians talked about the need to “vote Blue no matter who” even while they support anti-choice Democrat incumbent Henry Cuellar over a pro-choice challenger in a US House race in the Valley, many younger people were looking for other, more effective ways to fight back. Many demonstrators were interested in organizing walkouts at their school, or even their workplaces. There was a broad consensus, cutting through the shock from the still-fresh attacks, that business could not continue as usual. Over 100 people signed Socialist Alternative’s “No More Excuses” petition, demanding that the Democrats codify abortion rights into law and pledging not to support Democrats if they fail to do so.

Over 5,000 attended the Bans Off Our Bodies rally in Cincinnati on May 14th. Democrats wore down the crowd with hours of speeches focused on voting in November. The crowd’s response waned as each speaker repeated the same talking points instead of raising the objective need for mass action including student walkouts, strikes, and civil disobedience to defend abortion and LGBTQ rights.

Reflecting growing dissatisfaction with the Democrats, 100 young people and workers enthusiastically signed down on our petition pledging not to vote for Democratic Party politicians if they fail to codify and defend Roe v. Wade. Hundreds cheered our call for a new left party at our May 4th rally with worker-organizers at Starbucks and Amazon emphasizing that struggles for abortion rights and unions are fundamentally questions of democratic control over our lives as workers.

Socialist Alternative members spoke with dozens of high school students eager to lead walkouts in the final weeks of the school year. We’ll be hosting organizing meetings in the coming days and weeks to urgently discuss next steps.

Over a thousand people attended a rally hosted by Planned Parenthood Action MN at their main clinic in St. Paul. The speakers list was mainly Democratic Party officials like Amy Klobuchar and people from NGOs. However one illustration of the combative mood was seen in about a hundred young people confronting a pro-life counter protester, chanting over him and the speakers too.

Socialist Alternative member Noel said, “The Democrats have let us down big time. Our rights to vote, our rights to abortion, our rights to gender-affirming care – they stepped entirely out of the ring and asked us to vote in November, after the ruling has come down and out right to abortion is lost. This is an absolutely unconscionable step back from the fight – which is why I’m deciding not to vote for Democrats at all until they actually codify abortion as a right in law.”

“Nobody should lack access to abortion because they can’t afford it, which is why I’m advocating they also fight for Medicare for All that includes the right to reproductive healthcare and gender-affirming care. But I don’t think Democrats will actually do this. What we need is an independent working-class movement, built by unions, built by young people who are actually willing to fight back for our rights!”

By the end, over 300 attendees had signed on to the “No Excuses” petition. Many younger people expressed lots of interest in attending our Action Assembly on Monday night, and Socialist Alternative MN is also going to be meeting with high school students to help organize walkouts in their schools!

Socialist Alternative Detroit rallied and marched at an event organized by multiple organizers and organizations as the Socialist Feminist Contingent. The rally swelled to 1,000 attendees. We spoke with people on the need to escalate actions to prevent the movement from petering out, as very unfortunately happened with the George Floyd uprising, and pointed to the need for the movement to democratically develop strong demands that will pull working women into action, along with the rest of the highly diverse working class.

More importantly, these escalations and demands must be able to KEEP women and workers in the fight and raise their confidence that these demands can actually be won through class struggle! We cannot rely on the Democratic Party, who has 50 years and multiple concrete opportunities to codify Roe into law. Many of those in attendance agreed with us, and excitedly signed our No More Excuses petition, or signed up to come to our public meeting, discussing what these next steps for the movement would actually look like, and what will be necessary for the movement to not only defend and extend abortion rights, but to do away with the unjust, exploitative capitalist system entirely!